Posted in: No Huddle by Archive Authors on April 8th, 2022 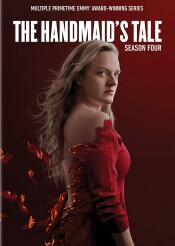 “I used to think of my body like an instrument for the accomplishment of my will. I could use it to run , pick things up, make things happen. There were limits, of course, but my body was nonetheless one with me. It obeyed my commands, mostly without complaint. Not anymore. Now there’s tending to be done. I almost died when we first got here, they said sepsis. Pain makes your world very small. My world has been this room. Today I venture forth. My world can’t be small. Not now. Because the others need me to protect them. Gilead is out there. Gilead isn’t afraid. It does not hurt or sleep. It keeps coming forever and ever and ever…”

At least for another season. A lot has changed both within the world of The Handmaid’s Tale and in our world of viewers. Ratings have dropped a little and this season the series is no longer being released on Blu-ray. That’s a bit of a step down. I think the show is just as compelling but it has been somewhat politicized in recent times and that’s never really a good thing when you’re trying to reach a wide audience. In this case it’s not the fault of the show itself but outside forces that have used the imagery to score political theatre points.

The most amazing thing about The Handmaid’s Tale — other than a powerhouse lead performance from the best actress working in television right now — is that this harrowing, suddenly timely cautionary tale about what happens when society falls asleep at the wheel is based on a story that was published more than 30 years ago. Of course, the show has a lot more going for it than impeccable timing. The Handmaid’s Tale is based on Canadian writer Margaret Atwood’s 1985 novel of the same name. Sometime in the not-so-distant future, the world is in chaos after environmental pollution and sexually transmitted diseases result in a catastrophic decline in human fertility rates. In the U.S., the result was Second Civil War, which led to the establishment of a totalitarian, Christian fundamentalist government known as Gilead. And while life isn’t exactly a picnic for anyone outside of Gilead’s elite ruling class, life is especially dire for women: they are not allowed to own property, work, handle money, or read. Much of this information is revealed in dribs and drabs over what is now three seasons.

The Handmaid’s Tale is created by Bruce Miller, a writer producer who worked on SyFy’s Eureka and The CW’s The 100. The former series offered a cracked-mirror, off-center version of reality, while the latter is a post-apocalyptic drama: both sensibilities proved extremely beneficial for Handmaid’s. A large share of the credit also goes to Reed Morano, who won a directing Emmy for her work on the pilot and established the show’s spellbinding visual tone by helming the first three episodes.

This series is Hulu’s first big prestige television swing, and the streaming service clearly spared no expense. With the help of a 20th Century Fox budget, production values here are top-notch; The Handmaid’s Tale has a dystopian/militaristic vibe that is all the more captivating when you realize most of the prominent characters are women (not the usual protagonists for this sort of story.) It turned out to be an even smarter investment. Now that Disney owns these Fox titles and they now own two-thirds of Hulu, the marriage of these two properties has become an even bigger win. Disney needs to establish an adult outlet for material now that they own those kinds of IP’s, and Hulu is where they will be sending properties like the FX library and R-rated films like the Deadpool franchise. The Handmaid’s Tale fits perfectly into that mold.

When the 3rd season ended June had managed to get almost 90 children and several handmaids out of Gilead on a flight to Canada. She was injured badly in the attempt and did not make the escape herself. But she did end up in friendly hands where she’s now recovered from her injuries and there are choices to be made. They’ve managed to settle on a farm where they might be safe, at least for a time. June is driven by more than saving these people she wants her child Hannah and it’s going to be used against her in such a way that we’ll see her do something early on this season you will not expect or see coming.

I takes a couple of escapes to finally get June to Canada. We get to see the front where the fighting has been strong and it’s also going to be another costly journey. But in Canada we now get to see this world from a very different perspective.

Moss became a star thanks to her tremendous work on Mad Men as Peggy Olson; Don Draper was the main character of that classic show, but Peggy was our entry into that world — the series starts during Peggy’s first day on the job — and her character had the most pronounced arc as the world at large changed drastically between 1960 and 1970. In Handmaid’s, Moss gets to play another woman radically out of step with the times. She projects incredible strength, a gallows sense of humor courtesy of June’s cynical internal monologue, and an ocean’s worth of emotion in this performance. (The standout is a scene in the episode Night when Serena emotionally tortures her.) The result was a loooooooong overdue Best Actress Emmy for Moss.

The supporting cast is strong as well. Dowd won a Supporting Actress Emmy for her ferocious work as Aunt Lydia. The character could’ve been a one-dimensional torturer, but Dowd manages to sneak in genuine affection in Aunt Lydia’s strict treatment of the handmaids. This season is her best work. Aunt Lydia has some huge ups and downs. She finds herself out of the job and finds a way to battle herself back to the top of the food chain. I find this character’s arc to be as compelling, if not more so than June’s. Dowd is exceptional and she gets a lot more meat to work with this season. There are moments you almost feel for her. She’s a “bad guy” sure but has become somewhat more sympathetic.

Fiennes is appropriately oily as Commander Waterford, but it’s Strahovsky’s work as his cruel, conflicted wife that has gone criminally unrecognized. She once again gets the chance to prove it. She is distancing herself from her husband even as the couple find “fans” in Canada and more support than you would imagine. Selena is pregnant now and she’s going to have more power in her situation and Hubby becomes part of a rather shocking season finale.

There’s still so much conflict even with June safe. She’s conflicted about her relationship with Luke (Fagbenle) and she’s letting her need for vengeance take over her soul a bit. It ends up leading to that brutal season finale I mentioned and it’s likely the most shocking moment in the series and that’s saying something.

The series is better than the latest buzz might suggest. It’s compelling drama with strong performances all around. I’m not sure how this season will lead the June character in the future. She’s becoming somewhat obsessed and her choices become more surprising. Sure we like our heroes to be pure and make the right decisions but this is going somewhere and folks might not get what they want but they might get something better. Anyway…”It’s nice to want things”.

Parts of this review were written by JC and Gino Sassani