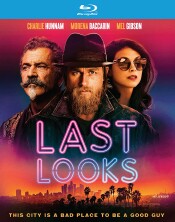 Most people want to do the right thing.  It’s usually far easier in your private life to do the right thing than it is, say, in a job environment where you have people constantly breathing down your neck.  They are far more interested in the company’s pocketbook or their image to society than what is right and wrong.  Therefore, it often leads to a lot of decisions (especially those in places of power) that from a surface appear questionable.  It’s even worse when that company or organization is in the public eye every moment of the day.  Today, we look at a film where an ex-cop has retreated to the mountains in search of a simpler life away from the grey choices of the police force.  All based on trying to do the right thing.  Let’s take a look.

Charlie Waldo (played by Charlie Hunnam) stretches in the woods and sits in silence meditating on his life.  Meanwhile we get some ecological narration about the future state of the planet and how awful the United States is at preserving it.  (Trust me, kids, China is much, much worse.)  After a brief morning, Charlie goes right back to meditating.  He also washes his clothes the old fashioned way.  All of the sudden he is greeted by a beeping horn of a car.

Lorena Nascimento (played by Morena Baccarin) has come to pay Charlie a visit.  She is there to tell him that Alastair Pinch (played by Mel Gibson), the famous actor, has murdered his wife, or perhaps he did not.  Since Lorena is a private investigator, she would like Charlie to help her with the case.  Charlie is a retired LAPD cop who put away the wrong person for a crime they didn’t commit.  He was then disgraced (because he wasn’t willing to play politics and let the case rest) and made to leave the force.  He passes on the offer from Lorena, and tells her goodbye.  They hug, and she leaves.  She reminds him that “Unfinished business is a bitch.”

Some time passes and Charlie gets another visitor by the name of Big Jim Cuppy (played by Clancy Brown), who treats the water in a not-so-friendly manner while Charlie tries to read.  Big Jim tells Charlie that Lorena just left something behind.  But Charlie doesn’t remember anything and tries to call Lorena.  Of course he hasn’t turned on his phone in a very long time and sees he missed twenty seven calls from her.  Lorena doesn’t pick up, unfortunately.

Charlie decides that Lorena can take care of herself and goes to sleep.  In the middle of the night in his trailer, three thugs break in and attack Charlie.  They say he’s in the papers and if he knows what’s good for him, he’ll stay in the mountains.  One frying pan to the head of Charlie later and he’s out for the night.  The next morning, we know what exactly Charlie is going to do.  He’s going to Los Angeles to find Lorena and figure out exactly what this case is all about.

Of course, once Charlie gets to Los Angeles, it turns into a fish-out-of-water scenario.  Everyone remarks that Charlie is wearing a dead animal on his face.  He doesn’t want to accept gifts (part of his 100 things), and he tends to get punched in the face a lot.  You could even argue until a midpoint in the film, Charlie isn’t even all that likeable of a character, just a sympathetic one (you can’t exactly hate someone who gets beat up that much).  But Charlie is surrounded by a wonderful and very recognizable supporting cast.

Besides Mel Gibson, Clancy Brown, and Morena Baccarin, we also get the likes of Rupert Friend (Hitman: Agent 47, Homeland (TV)), Robin Givens, Dominic Monaghan (Lord of the Rings), and even Method Man, among many others.  Most of these folks only tend to show up for a scene, maybe two, and then are put away for the next cameo that Charlie needs to interact with.  But all of these actors and actresses don’t seem to phone it in and actually give pretty darn good performances.  It’s these performances that turn this into a very pleasant surprise and one I would like to see get a sequel or even a short-lived television series.

Furthermore, may I say that Mr. Mel Gibson steals the freaking show.  His British/fake southern judge act is brilliant and really adds to the overall comedic element of the film.  Sure, a punch to the face can be hilarious, but a good ol’-fashioned drunken actor always brings a smile to my face.  Yes, I’m being serious, but it actually works, since he’s given a darling of a daughter in Sophie Fatu, who helps to give Alastair Pinch the right sympathetic fodder.  This movie is chock-full of people and items that you wouldn’t expect from a budget-type production.

This movie is filmed in a 2.39:1 widescreen format.  Principal photography for this film was done in Atlanta, but this is far from a city movie as we watch Charlie travel from the country to the city and a little bit in between with careful attention in highlighting those locales rather than having them meld together.  There is much attention to detail, and it gives the movie a larger-than-budget feel.

In addition to the detail, the movie has a wonderful look regardless of the scene, though to be honest the film didn’t “mess” with the dark too much.  I guess if I was trying to make one criticism, I would have liked the “country” scenes to have a little more grit to truly separate them.  They don’t meld together as I have mentioned, but a little more care could have been applied.  Still excellent overall.

The sound to this film is presented in DTS HD 5.1 Master Audio in English. Subtitles are included in English SDH, French and Spanish.  As with the video, the audio also does a great job of highlighting as needed.  The dialog is clear, no issues at all even when Mel Gibson is trying to sound like a southern judge.  However, when it comes to sound effects, the budget does rear its head a bit but there is a still a solid sound field to give elements of an action movie while keeping it’s crime thriller premise.  Fun movie that’s worth turning up.

Automatic Trailers: Once Upon a Time in Venice and The Man Who Killed Hitler and then Bigfoot.

Making of Last Looks 7:59: A pretty typical making of piece that doesn’t run nearly long enough to get any substance about the movie.  Most of the speaking here is done by Charlie, Mel (which is nice to see), and Jayne White (who plays Lucy Fry, the school teacher).  Lots from the crew as well.  It would have been nice for this movie to have maybe an extended interview with the director or a commentary.  Wrangling this many noticeable faces into a movie usually produces some humorous stories and I would have liked to hear some of them.

This movie was actually released on February 4th of this year per video on demand and had a very short run in the theaters overseas in places like South Africa and Russia.  Most people will probably dismiss it because of Mel Gibson’s “status” in Hollywood (which is really unfortunate since he stole every scene he was in) but truth be told it’s a really fun movie.  I really like the mystery even if its a tad predictable as the final curtain draws to a close.  It was a great time watching all of these mid-range actors that we all recognize come together for glorified cameos (with the exception of Charlie, Mel and Jayne) that really helped to elevate the production.

The disc put out by RLJ Entertainment is a pretty good disc.  It has excellent video and audio but the extras unfortunately were sorely lacking as they tend to be in these situations.  Which is a shame since the film is actually pretty decent, good even.  Maybe though on future releases, they cut the first two minutes of the film as the “message” is liable to turn a lot of casual film watchers away from the production.  I would certainly give this film a fine recommendation if you are stuck on a night with nothing to watch.  Heck, I could even see this adapted into a tv series if they do it right.  Enjoy.

Michael Durr has been reviewing movies for the better part of fifteen years now. He primarily enjoys thrillers, sci-fi, animation and even a little courtroom drama. His favorite films include Escape from New York, the Goonies and anything with Alyssa Milano. When he’s not praising Kurt Russell as the greatest actor of our time or scratching his head over a David Lynch flick, he’s spending time at home in Texas with his lovely wife, Lori and his amazing son. How they put up with him is a mystery, but even Basil Rathbone doesn’t have the time to solve that one.
Ambulance Indie Film Round-Up: Abigail Harm, Wildland, The Whaler Boy and Lucky Life