Posted in: No Huddle Reviews by Jeremy Butler on April 14th, 2022 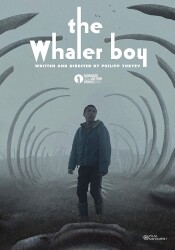 Here at Upcomingdiscs we have worked to bring you a large variety of reviews. Of course, we cover the big blockbuster films that hit the box-office and get us out to the multiplexes. We’re known for our television series coverage and have brought you the best in both television and streaming material. We also like to think that we introduce the world to some of the films out there that don’t have big budgets or advertisement campaigns. Tucked within these smaller releases you can find diamonds in the rough that showcase the kind of talent and storytelling you might get from a big studio but from artists who have visions that might not attract that kind of attention. The true fan of film is always on the lookout for these kinds of films and this monthly roundup is our way of bringing some of what we find to your attention. So do a little mining here and you might just find a diamond of your own.

This film was too much of a slow burn for me. Not to mention too artsy for me. Based on a Korean fable, “The Woodcutter and the Nymph,” Abigail Harm tells the story of a woman who reads to the blind and lives a predominantly solitary life after recalling the story about a woodcutter who saved the life of a mystical deer and was granted the wish of a companion. Before long, life imitates art as a strange visitor appears in her life. This is a strange tale indeed, as Amanda Plummer’s Abigail seems to immediately embrace the situation and begins to care for this individual. No attempt to take him to authorities and see if they can help. For the sake of time, I will accept that premise. However, given that it took over a quarter of the film’s running time to set up this idea, I feel obliged to point out that more of the run time was spent waiting on something significant to happen than on action.

There are some highlights. There is an innocence and purity in the relationship of Abigail in the stranger. It is as enduring as it is strange. Even so, it is a film with depth that I’m not sure I was able to fully appreciate.

A bit of another slow-burn film, but this one was able to appreciate more, as it premise was more relatable. A young girl finds herself in the care of her aunt and her three adult cousins after a tragic car accident that resulted in her mother’s death. The family is appears loving on the inside, but on the outside they have a long reputation as criminals. Before long, young Ida finds herself seduced into their lifestyle. This all comes to a screeching halt after a death results during one of their activities. This film gave me vibes of the start of the TNT series Animal  Kingdom. There are some real similarities between the two. The premises are virtually identical, with the exception of a gender swap of the main character. In the case of Wildland, Ida is put into a precarious situation in which it seems likely that the family that she has grown close to will turn on her. In all honesty, I was expecting something along those lines. In a sense, there is a betrayal, but not quite on par with what I was anticipating. Truth be told, I was somewhat disappointed with the conclusion of this story, as it did not feel adequately resolved in my opinion. There is a genuine shocking moment that I didn’t exactly see coming, but there was so much intrigue built up and never capitalized on that it was kind of disappointing.

The film had a way of sucking you in. My wife, who is not a fan of foreign films, couldn’t take her eyes of the film as she, like me, was desperate to know how the story would conclude. Needless to say, we both expressed our disappointment with how it ended.

This was probably the most interesting of the collective. Or least it had the most interesting premise. A boy from a small whaling village forms an unhealthy obsession with a webcam model. Despite the language barrier, this was a very interesting plot, and while the story did drag on in some areas, it did keep me engaged for the most part. It was easy to see how someone from a sheltered existence could lose himself in a world of sex and depravity. Seeing his descent into obsession, particularly with the chosen model, was the film’s highest achievement. The film perfectly captures the dangers of voyeurism, as the lead begins to feel a sense of entitlement, or ownership, over a woman that he has never met or spoken to. This drives him to be reckless and act out in ways that could potentially have longstanding repercussions. This made for a relatable and entertaining story.

The latter half of the film was bit harder to accept, as the character makes an ill-conceived attempt to find the object of his obsession. The idea never really gets off the ground and in reality is difficult to see actually occurring, but the film fortunately embraces how unrealistic the attempt is.

I wasn’t able to connect with this story. On the surface, it seemed like a very emotional tale about a group of friends who gather to support one another after one receives a terminal diagnosis. For me, however, it was just a series of events that held no significance for me.  Just a series of sequences occurring on the screen. I never felt brought into the story, and as such I was unable to form a connection with any of the characters, and by association, their dilemmas. In part, this was due to the way the story was laid out; long drawn out conversation, with no real context for me. Not to mention, during one specific sequence at a restaurant on the beach, the whole scene was done from a wide shot with no close-up cuts. It was like someone accidentally left the camera rolling. The more the story progressed, the less engaged I felt with the subject material.

Jeremy Butler is a film school graduate of the International Academy of Design and Technology. He is been writing for Upcomingdiscs since 2012; however, movies have played a big part of his life for much longer. Favorite genres include horror, science fiction/fantasy, and comedy. Favorite movies are V for Vendetta, Boondocks Saints, Kiss Kiss Bang Bang, and The Godfather.
Last Looks (Blu-Ray) Fantastic Beasts: The Secrets Of Dumbledore