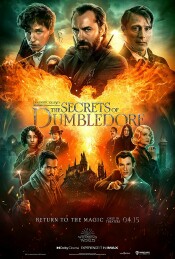 This was a bit of a letdown, if I’m being honest. It just didn’t deliver the epic conclusion that I was expecting. Honestly, it felt more like part 1 of a two-part conclusion. While it wouldn’t surprise me to learn that there is another upcoming installment in the franchise, at this moment I am unaware of any intentions to continue the series with this group of characters. Bearing that in mind, I must defer to my original statement: it was a bit of a letdown. In recent years, my fandom for the Wizarding World has been rekindled due my daughter’s discovery, and now obsession, for all things Harry Potter. I was especially glad when I learned that I would be able to bring her along for what I expected, at the time, to be an epic conclusion. And while the film got her stamp of approval, my approval is a little harder to receive.

When we last saw Newt Scamander (Eddie Redmayne), he and his group barely survived a battle with Grindelwald (Mads Mikkelsen), who’d managed to gather his supporters. Newt and gang only survived due to the sacrifice of his brother, Theseus’ (Callum Turner), fiancé Leta (R.I.P. Zoe Kravitz). Following her sacrifice, Newt, who tended to stay out of the magical politics, had chosen to stand with his brother and Dumbledore (Jude Law) against Grindelwald. In case of Dumbledore, this was more of a symbolic gesture thanks to a blood pact that prevented Dumbledore and Grindelwald from fighting one another.

As the events of this film start, Newt is dispatched on a mission on Dumbledore‘s behalf to secure a creature that will have some significance to the overall story. His mission is complicated by the arrival of Credence (remember Ezra Miller’s Credence). Moving on, the Wizarding World is divided, as Grindelwald amasses more followers and enacts his plans for Wizarding supremacy. In order to stop him, Dumbledore’s first army is assembled and dispatched. Comprised of the Scamander brothers, enemy turned ally Yusef Kama (William Nadylam), a renowned Ilvermorny Magical professor Eulalie “Lally” Hicks (Jessica Williams), and last but not least, Newt’s best friend and the rogue Queenie Goldstein’s (Alison Sudol) love, Jacob Kowalski (Dan Fogler); the group attempts to thwart Grindelwald’s rising power.

So, it’s worth mentioning that based on my research that this film is actually not where the franchise ends, as previously thought. In fact, there actually two more films planned for production. This is welcome news, as it helps give much needed context for my review. As mentioned earlier, this film felt more like the latest installment rather than a conclusion to the franchise. There were several storylines that were not properly wrapped up in my opinion. With this additional knowledge, it takes some of the sting out of my critique now that I am aware that more is to come.

That said, there were still some flaws that I feel warrant addressing, such as the Credence storyline, which for the most part was diminished in this film. For the past two films, Credence’s origins have been hyped up, and the audience was led to believe in his connection to a prominent member of the franchise. It was the jaw-dropping reveal from the last film, and a source of a great deal of intrigue and skepticism. Intrigue because it provided a captivating pathway to the next film, and skepticism predominantly from hardcore fans because it did not jive with the established cannon. Either way, the addition of this subplot would have the desired effect, making sure people stayed tuned in. However, this subplot is summarily wrapped up, and after two films of intrigue, I expected it to play more of a prominent role in the overall story.

Next issue is Grindelwald himself, who did not exude the genius and menace that I was looking for. This is no failing on the part of Mads Mikkelsen, for you would only need to look at his performance as Hannibal Lecter in the NBC series to know that he is capable of both those traits. That is sometimes the trouble with stepping into a role that has been occupied by other people; you want to respect their interpretation, but that can sometimes make it difficult to make the character your own. In the case of this film, he isn’t just dealing with one interpretation, but two, as he is following what Colin Farrell and Johnny Depp have done with the character. I also do not feel that Mikkelsen was given the latitude needed to make the character his own. As is, his interpretation isn’t bad, just not sufficient for the legend that is associated with the character.

I don’t want to keep beating up on the film, but I do want to address one final issue: the inevitable battle between Dumbledore and Grindelwald, which did not live up to expectation. I was expecting a longer sequence. If you saw the clips included in the film’s trailers, you’ve essentially seen the battle already. It was going to a buffet and sticking only to the salad bar. There was so much more to be done with this battle. The two greatest wizards of their generation are finally able to do battle, and it is basically over before it actually starts. Here is hoping for a more epic confrontation in the upcoming installments.

There were some bright spots to the film, such as Williams’ Lally Hicks, who was without question one of the most interesting addition to the series. Her introduction where she stages a mugging attempt to awaken the hero in Fogel’s Kowalski was comical as well as adding depth to Fogel’s character personality. There was also the addition of Richard Coyle as Aberforth Dumbledore, Albus’ younger brother. Though a bit underutilized, this addition brought intrigue and helped peel back the onion of the Dumbledore family tree. There is tension between the brothers, and it is clearly a long-festering familial issue, which is also where the film derives its name. I would have loved to see more time devoted to address the dynamic between the brothers. I think it would have provided additional emotional context.

Knowing what I know now, as it stands, Fantastic Beasts is a decent installment into the franchise. However, that is predicated on the next films setting up an epic conclusion. There are all the pieces needed for such a finale; things just have to be properly arranged. Just one more caveat: I expect to see Katherine Waterston back in a larger capacity in the next installment, as her role this go around was significantly reduced, and this adventure started with Newt Scamander and Tina Goldstein. I expect it to conclude with them as well.

Jeremy Butler is a film school graduate of the International Academy of Design and Technology. He is been writing for Upcomingdiscs since 2012; however, movies have played a big part of his life for much longer. Favorite genres include horror, science fiction/fantasy, and comedy. Favorite movies are V for Vendetta, Boondocks Saints, Kiss Kiss Bang Bang, and The Godfather.
Indie Film Round-Up: Abigail Harm, Wildland, The Whaler Boy and Lucky Life Strange Bedfellows / Man’s Favorite Sport? (Blu-ray)