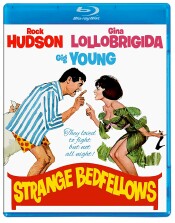 This month Kino Lorber and their Studio Classics line are releasing a pair of romantic comedies starring the late Rock Hudson. With 76 acting credits to his name, he made a name for himself by starring in westerns and comedies. What pop culture seems to remember most is that he was one of the most prolific actors playing the straight male that was always getting the girl when, in fact, the actor was gay. Now with these two titles, one I feel is a forgettable mess, while the other I had a good time with. Sometimes I’d say having two bedroom comedies could equal a fun double feature, but regarding these films, that is not the case.

This is the story of a high-in-demand company man, Carter (Rock Hudson) who meets a beautiful and eccentric bohemian woman, Toni (Gina Lollobrigida). The two develop a fast and passionate relationship where the pair rush out and get married. It’s not long before the pair realizes that they couldn’t be more opposite, and they loathe one another. Seven years pass. Carter never takes the time to go through with a divorce until the time comes he’s offered a major promotion, though the owner of the company is looking for a family man, which means Carter will have to either go through with a divorce or figure out a way to make things work with Toni … at least long enough to secure his promotion.

The first fifteen minutes of this film are, frankly, the only part of the film I liked. Once the character of Harry (Edward Judd) enters the fray, the charm of the film starts to fizzle and somewhat becomes mean-spirited. In the seven years that they’ve been separated, Toni has developed a relationship with Harry, and at first Harry isn’t threatened by Carter crashing back into Toni’s life or even that they slept together (Harry seems to be quite liberal and a free spirit when it comes to relationships) but he only gets possessive when it seems Carter wants to maintain his marriage and rekindle the romance. Harry basically uses Toni as a pawn to show Carter isn’t really trying to accept her bohemian ways, and Harry uses Toni as a prop to further their cause in a protest. Though Toni isn’t exactly likeable, she’s at least the one genuine person in the film who is just trying to be herself.

While the politics are played for laughs, you can see that this is still a film more focused on shaming American conservatives and glorifying European bohemian lifestyle. Sure, this is a film that is a product of its time, but it just doesn’t age very well. Even when Carter and Toni are fighting and things get a bit over-the-top, the jokes just don’t stick like they would have nearly 60 years ago. The film goes for the obvious opposites-attract ending, though it seems to show it’s Carter who has the arc and understands he can’t change a person or who he loves, but it’s a shame we don’t see both characters finding a way to compromise. This isn’t even broached in the film; instead it’s all or nothing, and frankly I just can’t believe this relationship could ever work. I’d believe UFOs crashing in a McDonald’s parking lot to enjoy a Big Mac over the plot of this film.

The second Rock Hudson film came as a delightful surprise. It’s notably the last comedy in Howard Hawk’s long and impressive career, and many would kind of look at the film as an update of the 1938 film Bringing Up Baby. While this is somewhat in the same genre as Strange Bedfellows, the film has a more fun and innocent outlook that more closely resembles films coming out a decade earlier and beyond. Rather than going for only the nose jokes, this film is a lot more clever with its wit and snappy dialog, and the performances from the entire cast are simply a delight to watch.

Roger Willoughby (Rock Hudson) is a best-selling author on the sport of fishing and is one of the number-one salesmen at his store. As luck would have it, he gets roped into a fishing tournament where he’ll have an opportunity to try out the store’s new gear, only the problem is Roger is a bit of a fraud and doesn’t know how to fish. To help him out is a press agent, Abigail (Paula Prentiss) and her friend and Isolde “Easy” (Maria Perschy) whom is helping sponsor the tournament.

The chemistry between Hudson and Prentiss comes off swimmingly in this film, and seeing the two banter is simply part of the fun. The sequences where we see Abigail training Roger to fish are quite fun, even if most of these scenes are rather quite predictable in how everything will work out. There’s a fantastic scene where Abigail goes to Roger’s cabin to ask for a sleeping pill and from there things go inevitably bad for poor Roger, but it’s these moments that I’ll be remembering fondly long after this review.

The film does have some pacing issues once the film gets to the lake for the tournament, but I wouldn’t say it enters the realm of boring at any point. Now, this does have one of the most random scenes I’ve ever seen, where there is a real live bear riding a motorbike, and, well, there is no mention of this by any of the characters; we just have to accept what we saw and go on with the film. Another weird thing that as viewers we have to accept is how many of the scenes at the camp that are supposed to be on a lake in the woods are actually a soundstage. There’s no doubt most of the film was filmed on a studio lot, and that’s fine by me, but newer audiences may find the fake sets a bit distracting.

What is impressive is how many of the scenes in the film seem to be done in long takes with very few cuts in the film. I’m a sucker for long takes where the actors get to play out the scene and we can see the rhythm of a performance take form. Then you factor in how Hudson did most his water stunts. It just makes the film click in a more believable fashion.

This is a classic film worth checking out or even revisiting if you are a fan of old Hollywood and the way films used to be. While I wouldn’t say this is an all-time favorite, I sure enjoyed this one, and I know I’ll re-watch it sometime down the road.

Brent Lorentson is a horror writer and film critic based out of Tampa, Florida. With a BA in Digital Film, he co-wrote and co-directed Scavenger Hunt. His short stories have appeared in various horror anthologies. In 2019 his short script Fertile Blood will be a part of the anthology horror film Slumber Party. He is currently working on his first novel A Dark and Secret Place set to be released in late 2019. Favorite Films: Taxi Driver, Fight Club, I Saw the Devil, The Wild Bunch, Dawn of the Dead, A Clockwork Orange, Pulp Fiction, Heathers, The Monster Squad, and High Fidelity.
Fantastic Beasts: The Secrets Of Dumbledore Spider-Man: No Way Home