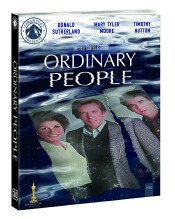 When watching this 1980 classic, it’s impossible to not notice its influence on films that would come later, most notably American Beauty (which would also win Best Picture in 1999). I bring this up not because Hollywood has a habit of recycling ideas, but more to point out that sometimes all it takes to make a great movie is to keep it simple, focus on issues that everyone deals with, and give it one hell of a cast that is willing to pour their hearts out onto the screen. The film is about 42 years old, and you could release it today, and it would still resonate with audiences; that’s what I feel makes a film great and where it merits the term classic. Paramount is dusting this title off from its catalog to release it under its Paramount Presents umbrella, and it’s definitely one of the standout releases they’ve put out. If it’s a film you haven’t seen yet, this is one that I consider a bucket list film everyone should see before dying.

The film is about the Jarrett family who are grieving the loss of their eldest son Buck, whom we find out later died in a sailing accident. Tragedy follows the family when Conrad (Timothy Hutton), their guilt-stricken son, attempts suicide. This is something we don’t see, and the film starts off with Conrad already out of the hospital and trying to readjust to life. Calvin Jarrett (Donald Sutherland) is the grieving father doing what he can to support his son and keep his family together. Then there is Beth Jarrett (Mary Tyler Moore), who seems to be broken from the tragedies that have struck her family and seems incapable of affection towards her son or husband. Instead of building up to a major conflict that divides a family, this is a heavy drama that opens after the fact and explores the messy outcome in a very frank and honest way.

Though Conrad may be listed as a supporting character, and Timothy Hutton won the award for Best Supporting Actor in this role, the heart and soul of this film is about Conrad and how he struggles with the guilt he feels. When he goes to a shrink, Dr. Berger (Judd Hirsch), we see Conrad’s slow arc with coming to terms with his brother’s death. These sessions over the course of the film are some of the film’s standout moments and have me wondering how much these scenes influenced the writing of Good Will Hunting nearly a decade and a half later. In these scenes, we get to see Conrad verbalizing his emotions and him coming to terms with everything, but even more impressive are the scenes he has with the two loves of his life, a girlfriend he had while in the hospital and then a new love that is brewing at his school. With both girls, he seems to want to open up to them. They give him this new lease on life, but when he’s at his most vulnerable with them, something goes wrong, and he doesn’t get to say what he really feels.

Then we have Calvin and Beth; when we meet them, they seem to still be in love, but the emotional cracks in this relationship run deeper than we think. We begin to see that Beth is merely putting on a facade for the public and refuses to embrace or express her pain, but Calvin is buckling under the strain of being the strong husband and father.

Sutherland makes his performance seem effortless, and then Tyler-Moore plays this role, unlike anything we’ve gotten to see her in, as she plays the role of Beth without warmth and at times, is outright cruel to her family. It would be safe to say that this film is a master class in acting.

It’s incredible when you realize this was Robert Redford’s first time directing a film. So many directors go their entire careers and never make a film that comes close to this acclaim. This is a strong first feature because Redford doesn’t try and get flashy with the cinematography; it’s obviously not an action piece. Instead, he lets the camera showcase his talent in guiding actors to give some incredible performances. The film is full of long takes and simple wide and medium shots, giving the performers a wide canvas to work with. He makes keeping it simple look like an art form, and it makes me wish they still made films like this. Instead, we get films with cuts every few seconds, and there just don’t seem to be movies anymore that just let the scene breathe like we do in this film.

The disc comes with two special features. The first is an interview with Timothy Hutton as he reflects on his experience making the film. The second feature is a bit briefer but is with the author Judith Guest with her discussing how Redford first approached her about adapting her novel and then her experience up to the Academy Awards.

This was a film I hadn’t seen before. I had known about it, but it just never crossed my path until now. This film moved me, not in a tear-jerker kind of way, but it left an impression that I haven’t had with a film in some time. It won Best Picture for good reason, and this one holds up better than a few Academy Award winners we’ve seen in the past decade.

Brent Lorentson is a horror writer and film critic based out of Tampa, Florida. With a BA in Digital Film, he co-wrote and co-directed Scavenger Hunt. His short stories have appeared in various horror anthologies. In 2019 his short script Fertile Blood will be a part of the anthology horror film Slumber Party. He is currently working on his first novel A Dark and Secret Place set to be released in late 2019. Favorite Films: Taxi Driver, Fight Club, I Saw the Devil, The Wild Bunch, Dawn of the Dead, A Clockwork Orange, Pulp Fiction, Heathers, The Monster Squad, and High Fidelity.
Spider-Man: No Way Home CSI: Vegas – Season One