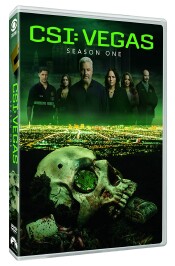 “You know, things change. Sometimes not so much …”

Someone at CBS must have eaten a lot of alphabet soup as a kid. Today the longest running show is NCIS, about to enter it’s 20th season along with a couple of sibling shows, one of which is also in double-digit seasons. It also happens to be their highest rated show over many of those 20 years. Before NCIS was crowned champ it, was another assortment of letters that reigned supreme at the eye network. That was CSI. It was the show that never looked like it had a chance. The series substituted lab work montages for car chases and explosions and featured a lot of talking heads that delivered some of televisions deepest techno-babble. Didn’t stand a chance. The flagship series lasted 15 years, while three sibling shows tacked on another 15 years before the franchise left the airwaves in 2015 after a television film appeared to wrap up the original series. Now it’s seven years later, and television has been swept by a new trend. It’s called the revival series. A ton of once popular shows have come back for “limited” runs. It all started with 24, and Fox was the king of the revival series at the start, bringing back The X-Files and Prison Break for the same treatment. And while CBS has made their own trend of remaking older shows like Hawaii Five-O, MacGyver and Magnum P.I. they have only recently entered the revival market. Criminal Minds will be back for at least a limited run of episodes and CSI is returning as a full-fledged series by going back to where it all started in Vegas. The result is the release of CSI:Vegas Season 1 on DVD from CBS Home Entertainment.

For the two or three people on the planet who don’t know, the idea is actually quite a simple one. The CSI   crime scene investigators utilize all of the latest science to solve often brutal crimes. Instead of guns, these detectives come packing microscopes and test tubes. If you want to know more about the previous seasons and spinoff shows, bang it here to catch up: CSI Reviews

The series takes us back to Vegas, where a rich donor has financed a brand new state-of-the-art crime lab. All of the familiar faces are gone, and there’s a new team of crime scene investigators on the job these days. They are led by Maxine Roby, played by Paula Newsome. She’s a DNA specialist and has developed ways to create physical profiles of unknown suspects with even partial DNA evidence. She has a young son and has the usual issues trying to balance a demanding job with being a single parent. Mandeep Dhillon plays Allie Rajan. She’s the scary-smart member of the team. She’s British and a graduate of Harvard. Matt Lauria is Josh Folsom. He’s the hands-on guy who excels at recreating crime scenes and reproducing patterns in the lab. He’s usually partnered with young Chris Park, played by Jay Lee. Park is still learning the ropes and is at times a bit overenthusiastic. The autopsy lab is now helmed by Dr. Hugo Ramirez, played by Mel Rodriguez. He’s a bit eccentric and is also a painter. Like a certain British medical examiner on the current alphabet show, he talks to the victims. Together they make up the new crime scene investigators at the Vegas CSI lab.

The series does a good job of updating both the look and technology of the series and has a new younger cast that is sure to appeal to this new generation of viewers. But you still have to find a way to connect it to the loyal fans who have been watching the show for nearly two decades. I think the writers here came up with a very clever story arc to bridge the two generations. These things often feel forced, but this arc is smooth and ties the shows together quite well.

Captain Brass (Guilfoyle) is now retired and has eye issues that have left him almost completely blind. He’s attacked in his home and nearly killed. Someone has sent someone to assassinate him, and he needs to find out who and why before they come at him again. He doesn’t really know this new group of CSIs, so he calls the only two people he really trusts. Enter Jorja Fox’s Sara Sidle and her husband and former boss William Petersen’s Gil Grissom. They get permission to “join” the force again, where they begin to unfold a plot that was never really about killing Brass. It was all intended to lead them to a storage container that appears to implicate their old lab-mate David Hodges, played by Wallace Langham, in a scandal. It appears he has been faking evidence for decades, and now all of his cases are called into question. This plays rather handsomely into the hands of a local sleazy lawyer Anson Wix (McShane), who stands to make millions from the thousands of lawsuits the scandal will bring about. So we already kind of know it was a frame job, and we pretty much know who was behind it all, but the trick that will take this collection of 10 episodes to deal with is how do they prove it and get Hodges off the hook just as he’s expecting a child any day now.

There are aspects here that play to both new and older fans. The new series uses the season-long story arc that has become the trend in drama television and yet still has several cases that stand alone while the larger story is playing out. So we still get to catch criminals each week, and we still get to see both old and new characters working on these “case of the week” crimes while we inch forward on the who-framed-David-Hodges hook.

Of course, there’s the line of suspects that might be in league with the big bad for the season, and one of these we’re not sure of is the department’s new boss under-sheriff Cade Wyatt, played by Robert Curtis Brown. Is he also in on the frame or is he just playing politics with the situation? That’s for you to learn, but either way he’s going to be a thorn in the side of our investigators.

Jason Tracey is the new showrunner, and he’s brought us such shows as Elementary and Burn Notice. So he’s there to modernize the show, but many from the old guard are still involved in producing the show from Petersen himself to Anthony E. Zuiker, and of course, it’s all still under the Jerry Bruckheimer banner.

You get all 10 episodes on three discs along with a few extras. You get some deleted scenes and a typical behind-the-scenes feature. There’s a tour of the new set and another on production design. As revivals go, this one is above average and has the chance to stick around for a while. Petersen is leaving as an actor, but as he did on the original show, he’ll remain a production partner while Fox is set to continue, at least for a little while longer. If the past is any indication, I don’t expect her to stick around very long. Not going out on a limb here, “Just follow the evidence.”

Gino Sassani is a member of the Southeastern Film Critic's Association (SEFCA). He is a film and television critic based in Tampa, Florida. He's also the Senior Editor here at Upcomingdiscs. Gino started reviewing films in the early 1990's as a segment of his local television show Focus. He's an award-winning recording artist for Omega Records. Gino is currently working on his 8th album Merchants & Mercenaries. Gino took over Upcomingdiscs Dec 1, 2008. He works out of a home theater he calls The Reel World. Favorite films: The Godfather, The Godfather Part II, The Body Snatcher (Val Lewton film with Karloff and Lugosi, not the pod people film), Unforgiven, Gladiator, The Lion King, Jaws, Son Of Frankenstein, The Good, The Bad And The Ugly, and Monsters, Inc.
Ordinary People – Limited Edtion (Blu-ray) Drive-In Retro Classics: Science Fiction Triple Feature (Rocketship X-M, The Hideous Sun Demon, The Brain From Planet Arous)