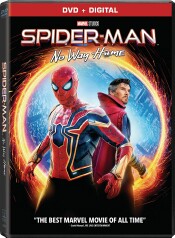 “If you expect disappointment, you will never be disappointed.”

That’s the trouble with sequels. The filmmakers feel this great responsibility to give us more than they’ve given us before with no thought to the idea that more is often less. There has never been a truly great comic book hero film that had extra villains. It just doesn’t work. You can’t give enough time and back story to everybody, so you have to cheat somewhere and cut a few corners. Those corners are things like characterization and heart. But what if you could? I mean, seriously. What if it were possible to do a multi-villain comic book movie that was really good? Until just now, I would have thought it was impossible. But isn’t that what the Marvel Cinematic Universe (MCU) has been doing for over 20 years now? Isn’t that what comic books have been delivering since the 1930’s when an alien baby stole the hearts of millions? Aren’t they in the business of doing the impossible? Spider-Man: No Way Home has done the impossible. There are five … count them … five villains, and this is the best Spider-Man film of them all. The pandemic might not be over, but the box-office drought will be. Spider-Man is set to break all post-COVID records, and there’s just one reason why. This movie reminds us why we used to go there in the first place. A movie that feeds the 10-year old Spider-Man comics fan inside of me and the adult looking for some real entertainment from my center seat in an IMAX theater. Run. Don’t walk. Run. Take your precautions, of course. But run. Run to the box office, and remember:

Here’s the deal. There’s a lot of “information” out there. Some of it is true. Some of it is BS. This might be one of the first times I wished I had known less about the film than I did. It’s the blessing and the curse of being “plugged in”. I’m not going to be revealing any spoilers here in my review. If you really want those, there are literally thousands of places on the net where you can get that. I’m going to be very sparse on plot details, and everything I reveal here can be spoiled by the official trailers. So be warned. I’m not going to dish the goods here, and you will thank me for it later. Cash is always good.

The film picks up literally right where the last one ended. Mysterio has revealed Spider-Man’s identity, and J. Jonah Jameson (Simmons) is broadcasting it to the world. Peter Parker (Holland) can’t catch a break. The feds are after him because they think he launched Starke drones to kill citizens, and the world is split down the middle like a presidential campaign these days. There are those who want Parker’s head. And there are those who stand behind him, still believing he’s a hero. It’s the last straw for Parker when he and his friends MJ (Zendaya) and Ned (Batalon) can’t get into colleges because of the reveal. See what spoilers can do?

So Parker goes to Dr. Steven Strange (Benedict) to try to cash in on that “we saved the world together” vibe and asks him to cast a spell to make the world forget he’s Spider-Man. In the comics, this was a pretty big storyline. There he makes a deal with the devil to wipe the world’s memories when Aunt May is shot and killed by one of his enemies. This time no one got shot, but Parker’s had it, and the spell goes awry. Of course it does. The result is a breakdown of the Multiverse, and villains from other universes are escaping into this world. That’s where the fun begins, starting with the return of Doc Ock, played once again by Alfred Molina. He’s computer de-aged, so he looks just like he did 17 years ago. He’s on the rampage and is confused when Spider-Man is demasked and he doesn’t look like his Peter Parker. Strange comes to the rescue and develops a way to send these villains back if Parker can shoot him with a cool Steven Strange beam. There are five in all, and I won’t name them, although if you look carefully, all five are revealed in the trailers. One is really hard to spot.

The bad news is that sending them back will mean their deaths. Strange is kind of OK with that, but Parker decides to try to cure them first. What follows is a series of battles that you just know is going to lead to one huge battle in the end. It’s an epic battle worthy of an Avengers film, and in a way, that’s what this is. It’s a villains’ Avengers, and although they’re one bad guy short and it’s never actually referenced, it’s the closest we’ll get to The Sinister Six.

You know there are going to be big battle scenes with tons of destruction. That’s pretty much standard equipment on these films now. You want to know if this thing is fully loaded with the other good stuff. As big as this film is, it also contains a great amount of heart. You get to see connections between characters like never before. No one is treated like an afterthought, and it will take you into emotional territory you will not be prepared to go to. The writing and performances here hit home runs all over the place. I dare you not to get emotional during several scenes in this film. I think the setup takes a little too much time, but honestly, the two and a half hours will zoom by. It serves as a wonderful trilogy cap, but it opens things up for so much more, and you will leave wanting more.

Get used to this whole multiverse thing. It’s going to dominate the MCU for a while. The upcoming Doctor Strange film is completely embroiled in this concept, and it’s already shown in the Disney+ shows. It’s not just Marvel. DC is going the exact same place. The next Flash film will feature the likes of Michael Keaton’s Batman from another universe. There it’s the Flashpoint story, and it will dominate DC for a while as well. It’s not as crazy as some tricks used in these kinds of films, and the potential is pretty much endless.

The film is available on all home video formats, including UHD, but the DVD is all Disney decided to send for review. I can’t really tell you anything about the quality of those versions.

Finally, this is a bit of a throwback to the pre-COVID MCU. The latest films are taking us in very different directions, and they feel very different. This one is a kind of love-letter salute to those fans before it all goes a new way. There are tons of Easter eggs and little stuff to notice. It will take multiple viewings for me to even appreciate it all. Now that’s good for box office. Spider-Man might be the first film to reach back close to that billion dollar number that we haven’t come close to in the last two years. Movies are back. The thrill rides are back. And man, have we needed this. “That feels weird. But I’ll allow it.”

Gino Sassani is a member of the Southeastern Film Critic's Association (SEFCA). He is a film and television critic based in Tampa, Florida. He's also the Senior Editor here at Upcomingdiscs. Gino started reviewing films in the early 1990's as a segment of his local television show Focus. He's an award-winning recording artist for Omega Records. Gino is currently working on his 8th album Merchants & Mercenaries. Gino took over Upcomingdiscs Dec 1, 2008. He works out of a home theater he calls The Reel World. Favorite films: The Godfather, The Godfather Part II, The Body Snatcher (Val Lewton film with Karloff and Lugosi, not the pod people film), Unforgiven, Gladiator, The Lion King, Jaws, Son Of Frankenstein, The Good, The Bad And The Ugly, and Monsters, Inc.
Strange Bedfellows / Man’s Favorite Sport? (Blu-ray) Ordinary People – Limited Edtion (Blu-ray)