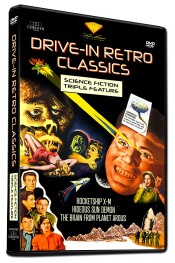 “There are some aspects of the life of an Earth savage that are exciting and rewarding; things that are missed by the brains on my planet Arous.”

When I was a kid going to the drive-in movies was a pretty big deal. In those days your parents would hide you under a blanket on the back seat floor or even in the trunk just to shave off a buck from the admission price. I don’t think the guys running those things really minded. It was kind of an open secret, and after saving a dollar or two, my pop would blow ten times that at the concession stands. He thought he was pulling one over on the management, but I think he was the one getting snookered. Still, it was a good time, and my mom and sisters usually fell asleep before the first of what was always a double feature even started. They were getting a little sleep, but I was getting an education. It was there along with the Friday night Shock Theatre shows on television that I was first introduced to Hammer’s horror films, AIP’s Poe classics, and countless schlock features from the likes of Roger Corman and William Castle. Someone at Corinth Films must have shared that kind of experience as a kid, because they’ve done the old double-feature nights one better with the release of Drive-In Retro Classics: Science Fiction Triple Feature. It’s three low-budget science fiction gems that predate my years at the drive-in. These films go back to the decade of the birth of low-budget sci-fi: the 1950’s. They’re all found on a single DVD, so don’t expect great picture or audio quality here. But if you’re like me, you’ve been watching these things on fourth-generation bootleg VHS copies for the last 20 years. Corinth goes one better there, too. Each of them only runs 10 minutes or so over an hour, so it’s not as cramped on this disc as you might expect. These are films that were curated by Wade Williams back in 2000 and found together for this entertaining release.

So what films will you find here?

It’s the first manned mission to the moon, and it’s called Rocketship Exposition Moon, or as the title suggests, Rocketship X-M. The press are gathered to see this surprise launch as the crew enter the ship. The crew consists of Dr. Karl Eckstrom, played by John Emery. He is the ship’s designer and expert on the craft. His assistant is Dr. Lisa Van Horn, played by Osa Massen. She’s also a chemist and expert on the ship’s fuel. Col. Floyd Graham is played by Lloyd Bridges, and he’s the ship’s pilot, and boy, is he in trouble. The ship was headed for the moon and ends up on Mars. Was that because Van Horn messed up the fuel mix or just bad navigating? You’ll have to decide for yourself. Rounding out the crew is Harry Chamberlain, played by Hugh O’Brien. He’s the astronomer and navigator. OK. Maybe it’s his fault. Finally, every space ship needs its Scotty, and here that’s Maj. William Corrigan, played by my favorite television dad Noah Beery, Jr. He’s the engineer. Beery is best known for playing the often-contrary truck-driving father of James Rockford on The Rockford Files. You can see a lot of that character here, as he plays a folksy Texan who happens to be the world’s best engineer.

The takeoff is the first film rocketship to show a multi-stage rocket instead of solid single vehicle. Of course, the ship ends up on Mars, where they find a primitive remnant of a once-technological civilization. They were destroyed by an Atomic war, and now only these violent primitives remain. They’re depicted as blind, but they seem to get around and aim their spears pretty accurately. They manage to escape with a couple of red-shirt casualties and try to make it back to Earth. The film contains a rather unusual dismal ending that was quite ahead of its time.

The film is in black & white, but the scenes of Mars were filmed with a red tint. But it’s really more of a sepia tone that gives the film an almost color feel. It nicely fleshed out the skin tones and was quite clever for its time. The film was directed by Kurt Neumann, who would go on to direct the 1958 original version of The Fly.

The film was rushed into and through production in order to beat George Pal’s Destination Moon to theatre screens, and did beat it by three weeks. Of course, Pal’s film sported a bigger budget, while this film went on to become a spoof episode of Mystery Science Theatre 3000.

The real star of the show was Lloyd Bridges, who would ride high with the television series Sea Hunt a few years later. Osa Massen will be familiar to horror fans from Cry Of The Werewolf.

Steve March, played by John Agar, is a radiation expert who lives and does research out in the desert. His instruments detect a strange source of gamma rays in an isolated area of the desert. It’s a good bet they aren’t coming from Dr. Banner, so March decides to investigate, and it turns out you wouldn’t like him when he’s angry. Along for the ride is red shirt … I mean lab assistant Dan Murphy, played by Robert Fuller. They discover a brand new cave, and as they follow the radiation scent they encounter a giant floating brain with eyes. Murphy ends up dead, and March ends up possessed by the giant floating brain who calls himself Vol from the planet Arous. The name is an obvious riff on Eros, and we soon get the connection when March returns to his fiancée, who finds his passion a little hotter than when he left. In fact, the brain begins to revel in his newfound appetite for Earth women. But that’s just a distraction for why he’s really controlling March. As a renowned radiation expert, March has access to government weapons facilities, and it’s there that Vol attempts to take over the world. He shoots eyebeams that can take out a model airplane in flight and destroy an entire military base.

Fortunately March’s fiancée Sally Fallon, played by Joyce Meadows, has taken her father, John Fallon (Henry) to investigate that cave. There they encounter Gor, a good guy from Arous, and he’s going to teach her how to stop Vol by taking over the couple’s German Shepherd. Turns out there’s this region of the brain that Sally keeps calling the Fissure of Orlando. She’s not talking about a new Disney World ride, because frankly Disney World wouldn’t exist for another 13 years or so. She’s really talking about the fissure of Rolando, which is a section of the brain where Vol is vulnerable to attack. It all ends well except for the several hundred killed on that base and those model airplanes.

John Agar is well known to people who love this stuff. He was in both of Clint Eastwood’s first two films Tarantula and Return Of The Creature. Usually he played good, clean-cut guys, so this was a nice performance piece for the actor. He gets to play both the good guy and the bad guy, and he does it quite well. Of course, the performance is lost with such a low-budget film, but there are many of us who appreciate John Agar’s contributions to the genre. Robert Fuller would go on to play Dr. Bracket on television’s drama series Emergency.

The film got a little recognition when a short clip from the film ended up in the opening credits of the sit-com Malcolm In The Middle. While director Nathan Juran would also end up doing a ton of television hooking up with Irwin Allen and working on Lost In Space, Land Of The Giants, Voyage To The Bottom Of The Sea and The Time Tunnel. But his most memorable work, at least for me would be on the Ray Harryhausen classic The 7th Voyage Of Sinbad. He also directed a cult favorite I first encountered in a drive-in theatre, The Boy Who Cried Werewolf in 1973. The film’s makeup was provided by Universal Studios great Jack Pierce, who created the famous makeups for Karloff’s Frankenstein’s Monster, The Wolf Man and The Mummy.

“Newspaper headlines across the country told the world of a new radiation hazard from the sun. Far more deadly than cosmic rays, an obscure scientist, my colleague Dr. McKenna, had already discovered this danger from the sun. This is his story…”

Gilbert McKenna, played by Robert Clarke, is “soaked” in a new kind of radiation after a horrible lab accident. He’s taken to a hospital where he shocks the staff with his lack of burns or any other effects of the exposure. But he does have a symptom that doesn’t reveal itself until he’s taken outside to get a little sun. The rays of the sun cause him to turn into a lizard-like creature who goes on the usual rampage. He’s basically a werelizard, and it’s sunlight, not a full moon, that causes the transition. When he’s in the dark, he reverts back to his human form. A lot of the film’s exposition occurs in the hospital where McKenna’s girl, Ann Russell, played by Patricia Manning, is being told by the doctor. By this time “Gil” has fled the scene and ends up in a piano bar where he connects with piano player Trudy Osbourne, played by Nan Peterson. They end up being muscled by the bar’s hood who is sweet on Trudy and end up tangling with the sunny side of Gil’s personality. This isn’t a cure kind of film, so you know you’re going to get the big showdown where the sympathetic monster gets put down.

Robert Clarke was a huge player in the low-budget world of the 1950’s. He was a producer who worked a lot with Edgar G. Ulmer, who we’ll be talking about soon in another triple feature collection put out by Kino. Unfortunately he was talked into doing a spoof of his own film here where he redubbed the characters into a silly film called What’s Up Hideous Sun Demon. He ended up regretting the move, and it has taken away some of the luster of the original film for what it was intended to be. This was drive-in stuff here, and the genre was strong from the 1950’s through the 1970’s. Then drive-ins started to die or become flea markets during the weekend days. Films aren’t really released for that purpose anymore, and recent generations have missed out on a film experience that pretty much no longer exists. Now they show the same films as the multiplexes at a discount. This DVD gives you a little taste of what it was like to go to those old double bills. A collection of these little gems? “That’s what I’ve been waiting for.”

Gino Sassani is a member of the Southeastern Film Critic's Association (SEFCA). He is a film and television critic based in Tampa, Florida. He's also the Senior Editor here at Upcomingdiscs. Gino started reviewing films in the early 1990's as a segment of his local television show Focus. He's an award-winning recording artist for Omega Records. Gino is currently working on his 8th album Merchants & Mercenaries. Gino took over Upcomingdiscs Dec 1, 2008. He works out of a home theater he calls The Reel World. Favorite films: The Godfather, The Godfather Part II, The Body Snatcher (Val Lewton film with Karloff and Lugosi, not the pod people film), Unforgiven, Gladiator, The Lion King, Jaws, Son Of Frankenstein, The Good, The Bad And The Ugly, and Monsters, Inc.
CSI: Vegas – Season One The Unbearable Weight of Massive Talent