Posted in: The Reel World by Brent Lorentson on April 22nd, 2022 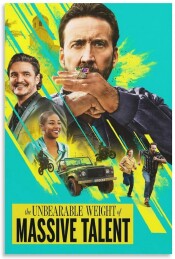 When you look back on the impressive 40-year career of Nicolas Cage, it’s pretty hard to pick a favorite performance. I can’t even think of another actor who has such a diverse batch of performances. Sure, the man is known for being a bit over-the-top, but that’s part of the charm of a Nicolas Cage film. People can be quick to point out that in recent years his “movie star” appeal has been fading with the amount of direct-to-video films he’s put out in the past decade. It even seems like there just isn’t a movie he’ll say no to so long as the check clears. Most likely you’d be half right in thinking that the man’s been through some financial issues, BUT at the same time he’s been in some fun and wild movies in the past decade as well. Mandy (2018) has become a bit of a cult success. Color Out of Space is another film in recent years to gain a cult following; then there is the fun Willy’s Wonderland, the bonkers Prisoners of the Ghostland, and the critically acclaimed Pig, which has a near-career-best performance from Cage. Basically, he’s stayed busy and put out some great work even if none of these films created anything close to a blip on the box office charts. When it comes to The Unbearable Weight of Massive Talent, it takes not just this past decade of Nicolas Cage’s career but the last 40 years and delves into the myth and the legend of the man off screen and creates a hilarious meta-film that comes so close to greatness that it’s hard to not feel this may be one of Nicolas Cage’s best films.

The film starts things off with a kidnapping. Just who this girl is is something we don’t find out till later in the film, but it’s a strong opening that then cuts to Nicolas Cage (obviously playing himself) taking a meeting with a director about what could be a career-defining role. In the film’s version of Nicolas Cage, we see him as a man struggling with his ex-wife Olivia (Sharon Horgan), while being an out-of-touch father to his teenage daughter, Addy (Lily Mo Sheen). It’s his relationships in his personal life that really work with connecting the audience to the character. We see he’s genuine in his own way with trying to maintain these relationships. It’s just that his passion towards his career just seems to get in the way. The heart of this film is about Cage needing to learn how to shift these priorities to be a better person. It seems simple, and we’ve seen this trope in many films before but never quite executed in this fashion.

With a massive amount of debt piling up and with Cage missing out on a role, his agent, Fink (Neil Patrick Harris), has set him up on a million-dollar appearance for a birthday party to meet a super-fan of his. Cage reluctantly takes the gig and is struggling with the decision about retiring from acting. In one of the film’s more amusing quirks, we have Cage conversing with an imaginary version of himself as Nicky (a younger version that goes back to his Valley Girl and Vampire’s Kiss days). I absolutely love these interactions between Nick Cage and Nicky. These moments alone are worth the price of admission, and still the film only gets better and more hilarious as it goes on.

The bro-mance that develops between Javi (Pedro Pascal) and Cage is genuinely what makes this film work so well. Javi is supposed to be this billionaire olive-exporting, Nick Cage super-fan who may or may not be an international gun runner who is connected to the kidnapping in the opening scene of the film. Cage doesn’t seem to believe Javi could be involved with anything that’s illegal, but the CIA thinks differently of Javi. The agents, played by Tiffany Haddish and Ike Barinholtz, are equal parts added comic relief but add a more serious and dramatic layer to the film. When they decide to try to make Cage an asset to spy on Javi, sure, it’s a convoluted plan, but at this point we’re already on board for this silly ride that really embraces its absurd plot and continues to make this movie fun.

Just about every moment Cage and Pascal are on screen together, it’s impossible not to grin. This relationship is what all fans would hope could happen if they met their favorite celebrity, and the way Javi handles these interactions, they seem so genuine even if the moment he shows Cage his private collection of props seems a bit over-the-top. Watching this friendship develop is really one of the better film experiences I’ve had in a while, and it’s because of the chemistry of the actors that I know I’ll be revisiting the film several times down the road.

Sadly, I have to say as much as I love the first 2/3 of this film, it comes so close to being a great film, but the final act of this film just falls apart. I don’t know if the filmmakers felt they needed to make cuts for time or if the budget ran out or whatever the issue is, but the final act of the film is a complete rushed mess. While I don’t want to get into spoiler territory, when the film eventually puts its focus on the kidnapping and the action-fueled showdown, it just falls flat. Storylines feel cut short, and the movie just seems to lose direction. It’s frustrating how clunky this all becomes where there seems to be a mad dash to tie up so many plot threads that when the credits roll, I’m just sitting there hoping for an end-credits scene just because I feel like it’s not complete.

While the movie falls short of being great, it does not diminish the performances of Nicolas Cage and Pedro Pascal. This is a film that will remind many filmgoers why they love Nicolas Cage and that he is pretty much a National Treasure (wink wink). I hope this film is a success, and really I want to see Cage and Pascal share the screen together again, because I can’t express enough how much I love seeing these guys together on screen. The Unbearable Weight of Massive Talent may not win any awards, but it is definitely one of the most enjoyable experiences at the cinema you’ll have this year.

Brent Lorentson is a horror writer and film critic based out of Tampa, Florida. With a BA in Digital Film, he co-wrote and co-directed Scavenger Hunt. His short stories have appeared in various horror anthologies. In 2019 his short script Fertile Blood will be a part of the anthology horror film Slumber Party. He is currently working on his first novel A Dark and Secret Place set to be released in late 2019. Favorite Films: Taxi Driver, Fight Club, I Saw the Devil, The Wild Bunch, Dawn of the Dead, A Clockwork Orange, Pulp Fiction, Heathers, The Monster Squad, and High Fidelity.
Drive-In Retro Classics: Science Fiction Triple Feature (Rocketship X-M, The Hideous Sun Demon, The Brain From Planet Arous) The Nowhere Inn (Blu-Ray)