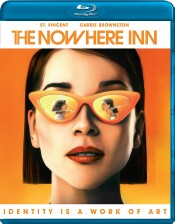 Easter 2021.  I’m sitting in a hotel room.  My wife and son are asleep in the adjoining room.  Meanwhile, I’m sitting in a chair flipping through channels on the television.  I come upon PBS where music is typically opera or symphony-based.  However, on this particular occasion, I am witnessing something far different.  A lady dressed in a red vinyl dress is playing guitar at the Austin City Limits.  It’s clearly rock with a bit of indie and pop thrown in for good measure.  But it’s unique all its own and familiar at the same time.  At first, I’m drawn in by her beauty, but I stay far longer once I hear her music and captivating sound.  Within days, I’m buying Masseduction  (and have bought several of her other CDs since then).  Her name is St. Vincent.  As it turns out, even before I was in that hotel room late at night, she was working on a mockumentary called The Nowhere Inn.  After the film falling victim in part to COVID for its release, it finally made it’s way to Blu-ray.  Let’s take a look.

A long, desolate highway.  A limo passes by with Annie Clark, also known as musician St. Vincent.  She is as it turns out doing just that: listening to music.  The driver up front rolls down the windowed partition and asks who she is, because he’s never heard of her.  Annie tries to explain, but the limo driver just goes on and on about how neither he nor his friend have ever heard of her.  Eventually he rolls up the partition and Annie goes back to listening to her music.

A minute or two passes, the partition goes down again, and the driver says he has his friend on the phone.  As it turns out the friend is actually the driver’s son.  The driver suggests that Annie sing a song to help his son actually recognize who she is.  After some push-back, she relents and sings New York, which is off her Masseduction album.  She gets to the point in the song where it says “MF’er” (not bleeped in the film) and the father quickly tells the son goodbye and again raises the partition.  Annie decides to open up a book this time and read.

After a few more minutes, the limo stops.  Annie calls out to see where the driver is, but nobody responds.  The driver is gone; he’s left the car and can’t be seen.  Annie is left all alone in the middle of, well, nowhere.  What exactly is she going to do?  Let’s hit those credits.

We resume with Annie sitting in front of a camera being asked why the movie was never completed and where things went wrong.  She talks for a while, and then we jump to Fear the Future (again from the Masseduction album) with St. Vincent live in concert.  Somewhere, a laptop is slammed closed.  We jump back to the beginning.  We are introduced to Carrie Brownstein, who is filming the documentary.  It’s supposed to be a music documentary about who Annie Clark really is.  But it’s also supposed to be intimate and revealing about the musician as well.

We learn more about Carrie and that she is more than a simple friend; she’s more of a confidant for Annie.  More music; let’s listen to Marrow (this time off the Actor album).  The tour behind the scenes is not very exciting as we watch Annie play Scrabble.  She does get a double word score, however.  Carrie suggests writing a song for the movie.  As we get more and more into the film, Carrie continues to push the musician in making a more exciting film.  Unfortunately, where it goes is for Annie to resort to her St. Vincent alter ego, which takes the film to a place of unexpected results for both the film and Carrie herself.

The film is an interesting hodgepodge of ideas as we explore the three stages of Annie Clark’s personality (Annie Clark, Annie Clark playing St. Vincent, and full-on St Vincent (and then some).  It’s not a film one really watches unless they have some understanding of her music or have read up on her career at least a little bit, or else some of the bits might go right over your head.  Country meets Year of the Tiger would probably require multiple viewings to understand.

The more important question might be: does this film belong in the same conversation such as This is Spinal Tap, the most famous mockumentary of them all?  Maybe this is closer to Blair Witch Project, since some people will swear that this is actually real.  Of course, those are the same people who think that St. Vincent stunt with Jezebel was actually real too.

The truth is that there a lot of great ideas here that needed perhaps more time to develop.  I also a bit selfishly did want to learn more about Annie Clark.  After all, to this point all I really know is what I read online and grab through her music.   But the only part that felt like “Annie” was probably in the first 20-30 minutes.  One just has to keep reminding themselves that they are watching a scripted film posing as a documentary and not The Life and Times of St. Vincent on the Road.

This movie is primarily filmed in a 2.35:1 widescreen format.  I say primarily because there are scenes in 1.78:1, scenes in full screen, half screen, and other aspects in between.  Anyway, the video comes in two flavors; we have the ultra-clear, rocking-the-free-world concert footage which has the wonderful color, sharpness, and everything looks fantastic. Then we get varying states of documentary-style footage.  Most of it is fine, maybe a little rough around the edges and some grit added for that artistic approach.  Every once in a while we get something a lot more tough to chew, and while I am sure it was done for aesthetics, it doesn’t always make for the best viewing experience.  I will however, forever remember a certain scene in lingerie for the rest of my natural born life, but I digress.

The sound to this film is presented in DTS HD 5.1 Master Audio in English. Subtitles are included in English SDH.  Sound is probably the shining light of this mockumentary.  The concert footage is again top-notch, which does a great job of showing off surrounds and crystal-clear music.  It rocks every channel, and the bass is fun without being too overbearing.  Again, the actual documentary footage takes a step back sometimes, but at least in this case very few times did I feel like it was lacking, as the dialog is rich and anything that can be described as a sound effect comes in with no distortion or crackle (unless intended).

Soundtrack Notes: The soundtrack to this film is available on digital and vinyl (just released on Record Store Day 2022).  Unfortunately not on CD, but it makes sense, I suppose, since the soundtrack is only about 30 minutes, and a vinyl holds about 40 minutes.  And you can pretty much put anything out on digital.  Honestly, though, including a CD as a bonus to people who bought the movie would have been a nice thought (anything as an extra would have been a nice thought).

Recently St. Vincent won her third Grammy for the album Daddy’s Home.  Her music is adored by tons of people, and many of her fans will seek out this movie now that it is on disc and digital.  It’s a very good movie, but unfortunately for many of those people, I think they might just leave disappointed, because they are seeking out What is Annie Clark Really Like? or On Tour with St. Vincent, and this is neither.  It’s a mix of mockumentary styles from the realistic to over-the-top with a little bit of Dakota Johnson in between.

The disc is well done with good (for a documentary) video and excellent audio.  Where the disc takes a dark turn, so to speak, is in the extras department where it’s completely bare.  A commentary, some faux “behind the scenes”, heck, even throw in a real live concert, a soundtrack as previously mentioned, any of these things would have done wonders for this disc.   So my recommendation is this: if the viewer is willing to take this production tongue-in-cheek and have a little fun with it, I think they will be rewarded.  However, if you are expecting something else, then perhaps this lyric serves you best: “People turn the TV on, it looks just like a window.” and will miss the point entirely.  Enjoy.

Michael Durr has been reviewing movies for the better part of fifteen years now. He primarily enjoys thrillers, sci-fi, animation and even a little courtroom drama. His favorite films include Escape from New York, the Goonies and anything with Alyssa Milano. When he’s not praising Kurt Russell as the greatest actor of our time or scratching his head over a David Lynch flick, he’s spending time at home in Texas with his lovely wife, Lori and his amazing son. How they put up with him is a mystery, but even Basil Rathbone doesn’t have the time to solve that one.
The Unbearable Weight of Massive Talent Parallel Mothers