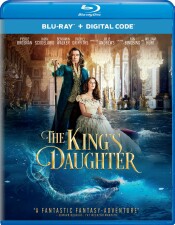 So, I fully expected this movie to be one of those films that I would have to subject myself to in order to appease my wife. I mean, I was familiar with nearly every member of the cast, but given the film’s plot, I expected to be bored and to find it cheesy. It just seemed like a clash. Like it should be two separate movies: one that deals with the secret daughter of the king, and the other a story about a mermaid. However, it would appear that I’m eating my words, as The King’s Daughter proved to be a far more entertaining tale than initially advertised. Based on the 1997 novel of The Moon and the Sun, the story follows Marie-Josephe (Kaya Scodelario, Pirates of the Caribbean: Dead Men Tell No Tales), a rebellious, free-spirited young woman who grew up in a convent. Her days are normally spent giving the Abbess a hard time. Unbeknownst to her, she is actually the daughter of the legendary monarch, King Louis XIV (Pierce Brosnan). See that in itself a full plot with much to explore. You’ve got the initial shock of learning one another’s identity and their relationship; you’ve got all the feelings and emotions that come along with that, and then there is the eventual prospect of the king falling under the young woman’s spell, all while attempting to use her as a political pawn. Now all those elements generally come standard with a film of this type, and they are of course featured here, but with one addition that at least seemed outlandish to me, but actually seemed to bring the whole story together: mermaids.

Yes, I said mermaids, as the film features a subplot involving the capturing of a mermaid for nefarious purposes. Now while the two plots do seem to clash at times, for the most part I’d say that they found a way to coexist without pulling focus. Naturally, Scodelario’s character is featured heavily and integral in both plots. Scodelario gives the character strength which is displayed in every scene, but shines prominently on several occasions, any time her character is challenged; no matter the challenger, whether it be a member of Marseilles court or the King himself. There was no better advocate for the mermaid than Scodelario. Her chemistry with the other members of the cast was also at the highest levels, such as with Benjamin Walker, her eventual love interest. I say eventual, because there was a period of time when I wondered whether their relationship would become romantic or remain platonic. It gave the story a great will-they-won’t-they vibe for a time. Scodelario also managed to save her scenes with Brosnan, as his character felt stifled and wooden at times. Thanks to Scodelario’s energy, these scenes were not unbearable.

Let’s talk about the film’s source material: the Nebula award-winning novel, which beat out George R. R. Martin’s A Game of Thrones for that honor. While not a carbon copy of the novel, I believe that the film honors the spirit of the book. As expected, the plot is updated and some of the characters are reworked or removed, such is the case of Walker’s character, who in the novel is depicted as Marie-Josephe’s older brother instead of her love interest. Also in the novel, Marie-Josephe is actually the King’s niece rather than his daughter. These changes actually worked more to the benefit of the film in my opinion. The King’s Niece just doesn’t have the same ring to it. Also, the change from niece to daughter provided more of the much-needed emotional connection, which culminates in the film’s final scene, when Brosnan’s character learns how to be a great king as well as a great man.

And then of course there is the mermaid, played by Fan Bingbing. At first it was hard for me to recognize her through the CG animation, but as the film went on, she became clearly recognizable. The elements with the mermaid were among the most interesting, particularly her connection with Marie-Josephe. A theme that I enjoyed was their communication, as Marie-Josephe appeared to be the only one who could communicate with the creature. The manner in which this connection is displayed is creative and easy to believe. While the mermaid at times seems like a minor player in the overall story, it is clear that she plays a significant role in the film’s entirety, which was in contrast to what I was expected. I believed that the mashup would be able to coexist, and in a sense I was right, just not in the way I was perceiving. It was my thinking that the two plots would distract from one another, but in actuality they need one another to balance their halves. Honestly, I don’t think the story would have worked at all without the mermaid storyline.

The King’s Daughter is a family friendly adventure that is very likely to catch you off guard, as it did me. Thanks to Kaya Scodelario’s graceful and stoic performance, the film is vibrant instead of flat. An ideal date night movie if I’ve ever seen one.

Jeremy Butler is a film school graduate of the International Academy of Design and Technology. He is been writing for Upcomingdiscs since 2012; however, movies have played a big part of his life for much longer. Favorite genres include horror, science fiction/fantasy, and comedy. Favorite movies are V for Vendetta, Boondocks Saints, Kiss Kiss Bang Bang, and The Godfather.
Parallel Mothers Cyrano (Blu-ray)