Posted in: Disc Reviews by Jeremy Butler on April 27th, 2022 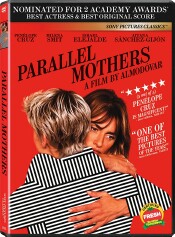 Fair warning to anyone who isn’t fluent in Spanish; you’re going to need to make sure the subtitles are on. There is an English dub, but I wouldn’t recommend it in my humble opinion, as it sounds very automated. That aside, this was a very interesting film that deals with a very emotionally complex issue. Two women, both expectant mothers, share a room at the hospital and form a deep connection with one another. Their backgrounds are very different, including the conception of their children. Both were not planned, but one has a more traumatic experience. Penelope Cruz serves as the prominent focal point of the film as well as the film’s heart, as much the emotional context of the film is seen through her perspective. Despite that momentous responsibility, she delivers an award-worthy performance as Janis, a photographer who finds herself pregnant following an affair with a married man. On the other side is Milena Smit as Ana, a young minor struggling to take care of her child. The two women’s connection is clear early on, and while their relationship takes a turn that I was not initially expecting, it is their connection that fuels the overall plot.

I’m going to do my best not to give away too many details, but the biggest reveal of the film is the film’s central construct. It was a direction that I wasn’t expecting the film to go in, but once it did, it made a lot of sense for the overall story. It added elements of tragedy, as the characters attempt to be there for each other. However, the element that I most enjoyed was the element dealing with Janis’ struggle of conscience. She has knowledge that she would give anything to forget, but can’t, and as a result she in a no-win situation. On one hand, if she does the right thing, it will be at a great cost; but if she makes the selfish choice, it will be at the expense of someone that she has grown to care about.

This moral dilemma makes the film for me. Cruz is good at portraying the nuisance of decision. It is evident that she is struggling, especially after the relationship becomes more meaningful. In reference to the chemistry between our leads, they have that in spades, even before the relationship becomes romantic. Besides the big secret between them, they have to deal with their age gap, which in itself is enough to cause strife. By the time things hit the fan, I was expecting more of a blowout. This was a bit of a letdown. Given the gravity of the secret, I was expecting more rage and shouting. However, things are resolved more amicably. This was a bit hard for me to swallow, because no one how unintentional the betrayal, it was still a betrayal nonetheless. I was at least expecting a slap or something equivalent to it. I built up in my mind the devastating effect that the reveal would have. In the end, the resolution was all too civilized for me.

That being said, I wasn’t completely disappointed with the film’s ending. While achieving this kind of catharsis would be difficult, it was not out of the realm of believability, at least one part of it. It actually gave the leads a good sendoff, but there was one supporting character’s fate that just seemed unrealistic: the baby’s father for Cruz’s character. Throughout the film, his character is morally bankrupt. From the affair to doubting paternity, he was not a character who deserved a peaceful resolution or any measure of happiness. And yet, it would seem like he never gets his just desserts. Ana’s mother is not without sin, but comparably she is less of an offensive character. They are both selfish, without a doubt, but when you calculate their transgressions, I was more upset about him getting off easy than I was her.

While I spent the whole movie reading, I was still able to connect emotionally with the film. At some point, I actually forgot that I was reading, and I was able to go on autopilot and focus on the story. Despite the language barrier, the power of the story can be felt and shines through with every scene. I’d say that this is Cruz’s career-defining performance, and that is saying something, as she has had a long and storied career already. Definitely worth seeing.

Jeremy Butler is a film school graduate of the International Academy of Design and Technology. He is been writing for Upcomingdiscs since 2012; however, movies have played a big part of his life for much longer. Favorite genres include horror, science fiction/fantasy, and comedy. Favorite movies are V for Vendetta, Boondocks Saints, Kiss Kiss Bang Bang, and The Godfather.
The Nowhere Inn (Blu-Ray) The King’s Daughter (Blu-ray)