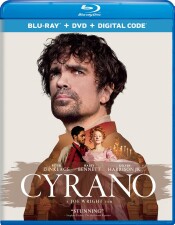 “What’s the word for when you’re bad at expressing yourself…  Speechless.”

The story has been around for centuries. After Dickens’ A Christmas Carol and Shakespeare’s Romeo And Juliet, it might well be one of the most imitated stories on film and television. There have been countless plays on the Cyrano themes, from The Brady Bunch to Friends. It’s a timeless story first portrayed in a stage production by Edmund Rostand in 1897, but the story goes back to the life of an actual historic figure from the mid-17th century. Of course, his life has been highly made up and likely little to nothing remains of fact from the actual person. The play was a hit, and the general ideas presented there remain popular to this very day. Now there’s yet another screen version based on a play written by Erica Schmidt, who happens to be the wife of Peter Dinklage’s wife. I was honestly not looking forward to the new film adaptation of Schmidt’s adaptation of Rostand’s adaptation of literary works going back to the 17th century. It’s frankly been done to death, and the last thing I wanted to see was Peter Dinklage, as good an actor as he is, with a huge nose walking around trying not to be laugh-your-butt-off funny. Unfortunately, it was awards season, and I needed to see anything I could get the chance to see before my own votes were due. Fortunately, the film wasn’t anything like I expected, and if I had checked out the modern play in which Dinklage also played the character on stage, I would have known that and been much more open to seeing the film. It was duty that brought me to that press screening. It was the chance to see a truly great film again that led to me jumping at the opportunity to review this Universal Blu-ray release. And by the way, there aren’t any large noses to be found anywhere in the film.

In this more modern telling of the tale, Peter Dinklage is Cyrano. He’s been in love with his friend Roxanne, played by Haley Bennett, since they were both young children. Instead of a disfigured nose, it’s his dwarfism that makes Cyrano believe he is unworthy of her love, and he must continue as her best friend to watch her with other men. But Roxanne is also frustrated. She’s under pressure to marry De Guiche, played by Ben Mendelsohn. He’s a lorded noble and has plenty of money and is used to getting what he wants. What he wants is Roxanne, and he’s been playing her waiting game for too long. She kind of teases him to avail herself of perks like theatre tickets, where she first sets eyes on recently-arrived soldier Christian, played by Kelvin Harrison, Jr. Of course, the evening’s events are upstaged by Cyrano, who challenges the famous actor on the stage in an amusing little farce that ends up going too far, and the actor is killed by Cryano’s deft sword. Cyrano has a reputation of being somewhat an over-the-top personality but also most gifted with that sword. He’s unpopular particularly with De Guiche, who sees him as a threat to his plans for Roxanne. It leads to some attempts on his life, which he takes rather cavalierly and to his own little amusement.

When Roxanne sends word that she wishes to see him alone the next day, he gets his hopes up that she’s finally going to confess her love for him, and then he would do the same. He goes to great lengths so the encounter can be just right. But what she wants is to confess her love for Christian and to beg that Cyrano befriend him and get him to write her a love letter. When Christian and Cyrano meet, he ends up doing what is asked of him, but Christian doesn’t appear to have much skill in the language of love and poetry. So that Roxanne will not be disappointed, he ends up writing many letters and even acting as cue cards for Christian’s first real encounter with Roxanne, and it’s Cyrano’s words that bring out such wild passion in Roxanne. When De Guiche sends their unit to war in hopes his rival or rivals will be killed, he goes so far as to threaten that she will either sleep with him as her new groom, or he’ll rape her. Apparently it’s all the same to him, but Roxanne and Cyrano plot to use that moment for Christian and Roxanne to marry. As expected, things don’t go so well in battle, and the film ends with a cat-and-mouse dance about whether Cyrano should come clean or not.

This is a musical, so there are some nice moments played out in song. The traditional “want” song, Madly, combined at times with the declaration of the lover’s becoming “overwhelmed” in Overcome, dominate the musical numbers of the show. Bennett has a nice enough voice, but I didn’t get quite the passion from her performance, likely because it was quite “overwhelmed” by the incredible performances of the three male leads. And that’s the film’s single weakness. She never has the chemistry with either Cyrano or Christian as they end up having with each other. Both dominate every scene they appear in, and that’s just bad luck for poor Roxanne. It’s a perfectly fine performance, but I feel she was miscast here. Oddly, the most moving musical number comes from Wherever I Fall, a song sung by the various other soldiers in the regiment that reflect their writing home before going on the suicide mission they are being sent upon to get rid of the other two guys. It’s the most moving piece by far, where it should be a little break or at best a distraction.

Ben Mendelsohn is pretty wicked as the “bad guy” here, but too often he reminds me of the Scar character in The Lion King. There’s something in the menace level and the singing meter and the way words are chopped that reminds me of that piece. His big number, What I Deserve, just brought back vivid memories of Be Prepared.

To be perfectly honest here, it’s all about an Oscar-worthy performance by Dinklage. I’ve always been a fan. His ability to play nuance usually leaves me wanting far more than they ever give me. He was the big star to come out of all of those seasons of Game Of Thrones, and he’s just never been bad in anything he does. When he’s not on the screen, no one has a chance, because you’re waiting for his next appearance. Fortunately, he’s in most of the film, and you never have to wait long for his brilliance to shine yet again. If everyone else sucked in this film, he would be reason enough to watch it at least once. Fortunately the rest of the cast are, for the most part, pretty solid. So he’s just the best reason to see the film at least once.

Cyrano is presented in its original aspect ratio of 2.39:1. The 1080p image is arrived at with an AVC MPEG-4 codec at an average 30-35 mbps. The high-definition image presentation is likely not near the equipment showoff piece the 4K release must be. The Italian locations are very nice indeed, and there’s a ton of solid production design here. But this is how the film was released for now, and it won’t disappoint. I say this also because the film was shot in native 4K with an accompanying 4K digital intermediate. So this is going to look as good as it can short of a UHD release. I love the close-up work here with nice flesh tones and good detail on faces. Dinklage uses those subtle and not-so-subtle facial expressions to cap a good performance, and the camera appears to know this well. Colors aren’t overly bright, but there are some nice reds and good texture from the costumes. The frozen battlefield doesn’t provide great detail because of the incredible fog and filter use, but it’s perfectly atmospheric and a nice change from most of the film. Black levels are solid, and there’s nice shadow definition when called for.

The DTS-HD Master Audio 7.1 is everything you can expect it to be without going overboard. Surrounds are used nicely for placement, but most of this stuff is coming from the front. Dialog is important, and it’s treated that way. Of course, the music has to be the centerpiece of the audio presentation, and it is. There’s wonderful clarity and nice wide field for the arrangements to breathe. There’s some nice surrounds on the battlefield but no heavy use of subs to dominate something that should be and always is character-centric.

An Epic Adventure – The Making Of Cyrano: (9:10) This is your typical making of feature. Plenty of input from cast and crew. Like the film itself the focus here is on the characters, while most aspects of production design get some attention. There’s plenty of behind-the-scenes footage, and it’s not so overwhelmed by clips.

Awards season is what first brought the film to my attention and scored an intimate press screening. It was my best musical of the year, and I’m sorry it never got enough of a wide release to get it the attention it deserves. It is quite likely you hadn’t heard of the film at all, and now is your opportunity to correct that misfortune. You will be moved and entertained. “That I can promise you”.

Gino Sassani is a member of the Southeastern Film Critic's Association (SEFCA). He is a film and television critic based in Tampa, Florida. He's also the Senior Editor here at Upcomingdiscs. Gino started reviewing films in the early 1990's as a segment of his local television show Focus. He's an award-winning recording artist for Omega Records. Gino is currently working on his 8th album Merchants & Mercenaries. Gino took over Upcomingdiscs Dec 1, 2008. He works out of a home theater he calls The Reel World. Favorite films: The Godfather, The Godfather Part II, The Body Snatcher (Val Lewton film with Karloff and Lugosi, not the pod people film), Unforgiven, Gladiator, The Lion King, Jaws, Son Of Frankenstein, The Good, The Bad And The Ugly, and Monsters, Inc.
The King’s Daughter (Blu-ray) Edgar G. Ulmer Sci-Fi Collection