Posted in: Disc Reviews by Gino Sassani on June 3rd, 2022 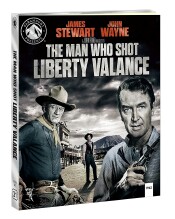 “Let me speak to you directly and from the heart.”

My first exposure to The Man Who Shot Liberty Valance wasn’t the film at all. It was the song (The Man Who Shot) Liberty Valance, written by Burt Bacharach and Hal David. It was a 1962 hit song by Gene Pitney and was written to be included in the film. I wouldn’t really be taken with the song until James Taylor would cover it and have his own hit with the song in 1985 with his album That’s Why I’m Here. By then I’d seen the film but only on late-night television broadcasts which offered bad transfers and plenty of commercials that caused the film to be chopped by over 26 minutes. The funny thing about the song is that while it was written to be included in the film, it actually never appears. Director John Ford thought it sounded too modern and suggested it would only weaken the film and insisted it not be used. It’s almost unfortunate that at the time the song actually received more commercial success than the film did. Now you have a much better opportunity to check out this often overlooked classic, because Paramount has remastered the film and released on UHD Blu-ray and in glorious 4K.

Ransom Stoddard, played by James Stewart, is a United States senator who has returned to his hometown of Shinbone to attend the funeral of an old friend. Stoddard is quite old now, and it’s a bit of a mystery why this accomplished man would take the long journey to attend the funeral of a man who wasn’t well known at all. He’s bombarded by the local newspaper editor for the story, and when confronted with the press’s right to tell the story, he reluctantly agrees, and most of the film is that story.

Many years ago Stoddard was a lawyer taking the stagecoach through Shinbone. The stage is ambushed, and when Stoddard stands up to the thieves he is mercilessly beaten by the infamous leader of the outlaws, Liberty Valance, played by Lee Marvin. He’s left for dead by the bad guys and found by local tough guy Tom Doniphan, played by John Wayne. Stoddard is left at the local restaurant to be cared for by the owner Hallie, played by Vera Miles. He is nursed back to health and feels he owes a debt to Hallie and starts to help out in the kitchen and serving patrons. But he’s frustrated by this frontier idea of justice. He wants to bring a kind of law and order to this part of the country and is mocked by Doniphon for his naiveté. While Tom tries to teach him the gun skills he feels Stoddard really needs, it is becoming clear that both men are rivals for the attentions of Hallie. But that’s not where the trouble is going to come from.

Liberty Valance and his gang make a scene at the restaurant, and it even further inflames the sensibilities of Stoddard, who eventually decides to take a stand against the villain even if it means he’ll be killed. But he’s not killed. By some kind of a miracle that gets paid off at the film’s conclusion, it is Stoddard who survives and gains popularity for ridding the town of the bully. Eventually movement for statehood comes to the territory, and it’s Stoddard who is elected to represent his town in Washington. That’s when he learns the truth behind his encounter with Valance.

This film was kind of a swansong for many of the participants, while it was a beginning for Lee Marvin. It was his first feature role, and it brought him the kind of attention that made him a star going forward. But this was getting toward the end of the line for the likes of John Wayne and James Stewart. Both would reunite the very next year with John Ford for How The West Was Won, but this would be John Ford’s final important film. Both Stewart and Wayne would still have some hits in front of them, but their roles would change to the elder characters from this point forward. John Ford’s age and constant fights with studios would doom him to smaller pictures until his retirement four years later in 1966 and his death in 1973. He only directed a segment of How The West Was Won.

This film is often overlooked because it doesn’t quite fit the mold of the participants. John Ford was known for his expansive vistas. He truly invented the wide open spaces of the western, but this film is far more compact. It’s shot mostly in exteriors and studio lots with very little exterior shooting. The choice to use black & white has often been chalked up to his small budget, but Ford himself has said countless times that the choice was intentional. He believed that the studio backlot locations didn’t hold up as well in color. He thought that with his use of shadows and by using black & white he got more authenticity. He was also concerned with the makeup on both Stewart and Wayne. Stewart was made up to look very old in the framing sequences, and both were made to appear much younger for most of the narrative. He didn’t think that would hold up in color and believed that would distract from appreciation of the film. It turns out he may have been correct. Look at The Irishman if you want to see how bad aging can look on a film with such iconic actors, and make no mistake; James Stewart and John Wayne were as big in their time as Robert DeNiro is today or at any time in his career. Trust me, this was not a budget consideration, and anyone familiar with Ford’s caustic ways knows he would not have accepted such a budget decision if he thought it would mess with the integrity of a film.

Enough can’t be said about how well the actors were cast in this film. Even at the end of his career, James Stewart had that ability to sell sincerity no matter how ignorant it might be. You want to believe everything the man says. While this wasn’t one of John Wayne’s most famous roles, it’s the one noted most by impersonations of the Hollywood giant. This is where the word “pilgrim” shows up 20 to 30 times when he references Stoddard. Not to be overlooked is Vera Miles as the leading lady here. Miles has a presence here that accomplishes no small task. She has to stand out when all of her scenes are with Steward or Wayne and often both. She isn’t given the greatest dialog here, and her part isn’t as defined as it might have been, but she gives it gravitas even when it wasn’t on the page. Woody Strode is another standout as Pompey, the servant and companion to Doniphan. James Stewart complained that he thought the actor was made up as a racist Uncle Remus character and was publicly ridiculed on set by John Ford for the opinion. The role was tainted by the condition of these kinds of roles at the time, but Strode adds dignity and strength to the character throughout. Look for supporting roles from Spaghetti Western veteran Lee Van Cleef, John Carradine, and Denver Pyle.

The unexpected — for the time — performance came from Lee Marvin, who inhabited this iconic bad guy role and went toe-to-toe with both Stewart and Wayne. His career shot up from here, and it’s really no mystery where he made that name for himself. It was here as Liberty Valance that Lee Marvin launched a well-deserved and long-lived career.

The Man Who Shot Liberty Valance is presented in its original aspect ratio of 1.85:1. The ultra-high-definition image presentation is arrived at with an HEVC codec at an average of 70 mbps. This is a black & white film shot on film so that we have a native 4K source. I hear too many people dismiss black & white films in 4K as unnecessary, and it’s taken too long for many of them to get their due. But understand, resolution in detail and sharpness is just as important here. The crucial greyscale that Ford takes such advantage of is remarkable here. You get nice tight separation of shadows and hues, and you also get wonderful detail in facial features and other places. Ford’s use of shadow for atmosphere is finally given the attention it deserves, and the result is an amazing image presentation here.

The Dolby Digital True HD 5.1 track doesn’t disappoint. This is a mono 1962 film we’re talking about here, and it would be criminally inappropriate to try to expand into an aggressive surround presentation here. The audio is there to support the dialog. Action scenes shouldn’t lead us into the temptation to show off modern methods. Subs come alive just enough to add depth to it all. The score doesn’t distort on the highs as many of these old films tend to do. It’s an enjoyable audio presentation that maintains the integrity of the original film.

The only new feature here is a Filmmaker’s Focus with Leonard Maltin revisiting the film.

It breaks my heart when I hear even modern film critics complain about having to watch an older film, particularly if it’s in black & white. I worry that the concept that it doesn’t matter will influence these studios and keep classics like this from getting the treatment Paramount gives here. If you are a regular here, I hope that doesn’t really apply to you at all and that you have an appreciation for film history. It’s important that as technology moves so far away from our past that the past isn’t left behind. There are so many lessons to be learned by modern filmmakers. Elements like atmosphere, shadows … “Oh well. You know all about that.”

Gino Sassani is a member of the Southeastern Film Critic's Association (SEFCA). He is a film and television critic based in Tampa, Florida. He's also the Senior Editor here at Upcomingdiscs. Gino started reviewing films in the early 1990's as a segment of his local television show Focus. He's an award-winning recording artist for Omega Records. Gino is currently working on his 8th album Merchants & Mercenaries. Gino took over Upcomingdiscs Dec 1, 2008. He works out of a home theater he calls The Reel World. Favorite films: The Godfather, The Godfather Part II, The Body Snatcher (Val Lewton film with Karloff and Lugosi, not the pod people film), Unforgiven, Gladiator, The Lion King, Jaws, Son Of Frankenstein, The Good, The Bad And The Ugly, and Monsters, Inc.
Lucifer: The Complete Fifth Season Infinite (UHD Blu-ray) (4K)