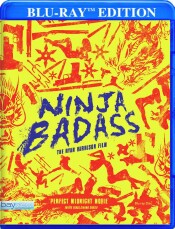 Have you ever had the desire to see a midwestern take on ninjas? I’m going to go out on a limb and say that you have not, but the if you happen to be that one person out there with an itch for bad cinema, I’m talking the kind of film that makes Troma look like high art cinema, then Ninja Badass may be the movie to quench your need. After 30 minutes of watching this film, I had to stop it and take a break. When Ed Wood set off to make his films, he didn’t intend to make a bad movie; it just happened. He was a filmmaker just trying to do the best he could without any real talent supporting him. Ninja Badass seems to go above and beyond to create one of the worst films in history, and what’s somewhat frustrating is that this was almost a good movie if it had showed just the slightest bit of restraint. But restraint is a word not in this film’s vocabulary. This is hands down the most WTF-did-I-just-watch movie in all my time reviewing films.  This is no small feat.

This is a homage to bad cinema. It claims to parody B-cinema, but I have to disagree, because B films, though they didn’t have the biggest budget or the biggest stars, they were still doing films that were just compromised because of their budget, but they still had intriguing stories and would at least have a few actors you may have seen before.  This film I’d say is more a lampoon on the Z genre of cinema, films shot on no budget, with cheap equipment and a ragtag group of actors and crew just trying to make a movie for the hell of it. I can respect that these guys even got a film made; it’s not as easy as it looks, and sure, it seems like they had a hell of a good time making this film. But as a viewer with no connection to the film or crew, this is an assault on the eyes, and I believe watching this film could result in causing me to have a stroke or worse.

The Ninja VIP Super Club is an organization of ninjas that have set up franchises across the Midwest, and their leader is Big Twitty (Darrell Francis), who more closely resembles a car salesman than a ninja master, but he certainly has the look to play a villain in a movie. These groups of ninjas get their power from killing and consuming puppies, and it’s when Big Twitty goes to rob a pet store of their puppies that the story kicks off. Rex (Ryan Harrison), our knucklehead of a hero, happens to be at the store during the robbery, and he finds himself smitten with the clerk. She tries to stop the puppy theft but in the process gets herself kidnapped. Rex is in love and makes a vow to rescue her. The plot seems simple enough, but what you actually get on screen is over-the-top mayhem with the bag of puppies being used as a weapon, dismemberments, and ludicrous karate chops. Don’t try following this plot, because you will get a headache.  This is the perfect excuse to drink and smoke pot while consuming this movie, because I’m relatively certain intoxication on some level is required to watch this.

So Rex wants to be a hero, and that means he needs to train to become a ninja, and the man that volunteers to train Rex is Haskell (Steven C. Rose). Haskell is decked out in military fatigues. His dismembered arm has regenerated into a  long intestinal baby hand that swings and slithers around. But before Rex can partake in the training he needs to get 100 egg rolls to consume. Consumption of these egg rolls is crucial to the training to become a ninja.

There are many points in this film where you’ll be asking yourself what the hell is going on. Oddly enough, Rex’s relationship with an inflatable sex toy named Wendy is one of the few things that doesn’t feel so absurd. We get women having sex with Chinese dragons, hearts being ripped out and replaced by puppies, a motel room fight scene with a severed foot, and even a fight scene with swinging testicles that are chewed on by their owner. I’m all for over-the-top gonzo silliness, but this film just overstays its welcome. The sequence with Rex smashing plates with his crotch for a few minutes is one scene of excess that could easily have been removed, but crotch trauma seems to be a constant in this film. For those patient enough, the payoff with a half-naked woman cooking bacon is what I’ll safely call the standout moment of the film.

The film clocks in at just over a 100 minutes, and it still feels like an endurance challenge. If this were trimmed down to be a 30-minute short film, I think it would be more digestible and more entertaining. Ryan Harrison put in a lot of work to pull this film off, and on a micro-budget, and for that I can respect the guy for doing something this crazy. When it comes to the camera work, this film has some quirky shots that are reminiscent of old school Sam Raimi, and for that this film was a bit more tolerable. The biggest takeaway is it looks like everyone involved had a good time making this movie, and while I don’t think it should be available for public consumption, they did something that very few actually accomplish, though many talk about doing.

Brent Lorentson is a horror writer and film critic based out of Tampa, Florida. With a BA in Digital Film, he co-wrote and co-directed Scavenger Hunt. His short stories have appeared in various horror anthologies. In 2019 his short script Fertile Blood will be a part of the anthology horror film Slumber Party. He is currently working on his first novel A Dark and Secret Place set to be released in late 2019. Favorite Films: Taxi Driver, Fight Club, I Saw the Devil, The Wild Bunch, Dawn of the Dead, A Clockwork Orange, Pulp Fiction, Heathers, The Monster Squad, and High Fidelity.
Indiana Jones and the Raiders of the Lost Ark – Limited-Edition Steelbook (UHD Blu-ray) (4K) Billions Season Six