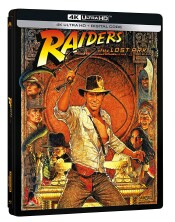 “For nearly three thousand years, man has been searching for the lost ark. It’s not something to be taken lightly. No one knows its secrets. It’s like nothing you’ve ever gone after before.”

Just in time for the wrap of principal photography on the next and final Indiana Jones film, Paramount cashes in on the renewed interest with the long-awaited, at least from this reviewer, release of the first four films in the Indiana Jones franchise on UHD Blu-ray in full ultra-high-definition complete with HDR and Dolby Vision. OK, I lied about the long-awaited four films. Now you can own the first on its own in this special Steelbook release of Raiders Of The Lost Ark on UHD/4K. No, I’m not going to call it Indiana Jones And The Raiders Of The Lost Ark, and yes, Han shot first and those feds in ET were not carrying walkie talkies in those hands. So sue me.

Harrison Ford was once the top selling actor in Hollywood. He owes this distinction in no small part to a couple of trilogies he did early in his career. While Star Wars might have been a chance for Ford to break out, Raiders of the Lost Ark and its sequels defined his abilities. Indiana Jones is the perfect hero. He’s strong, intelligent, and above all, moral. Unlike the stereotypical hero, Jones is also vulnerable, and at times flawed. Credit Steven Spielberg for the iconic stature Indy occupies today. Left to his own devices, George Lucas would have given us Tom Selleck as the cigarette-smoking, morally bankrupt Indiana Smith.

Raiders of the Lost Ark brought back the cinematic tradition of the two-reel serials. These shorts would combine with a newsreel, a cartoon, and a feature film to provide a splendid moviegoing event in the early days of talkies. To those of us too young to remember them, the Indiana Jones saga is a time machine to a much simpler day of good guys and bad guys. While even Spielberg himself admits that Indiana Jones and the Temple of Doom was inferior to the rest of the trilogy, even this weaker film provided a historic filmmaking moment. Because of its dark nature and gore elements, the film did not fit neatly into the PG rating. The filmmakers did not want this “family” adventure labeled with R, so the ensuing conflict brought us PG-13, now the most widely used rating on films. Indiana Jones and the Last Crusade dared to show us a much more vulnerable hero with the addition of his father. The relationship is a complicated one, but a relationship every father and son can instantly recognize and relate to. Right, Dad?

George Lucas has a problem, and there doesn’t seem to be a support group for it. He simply can’t let well enough alone. His special editions of Star Wars have become comedic fodder. South Park did an episode where the boys steal the master print of Raiders to protect it from Lucas’s attempt to “redo” it. For the most part Raiders is the same, but Lucas simply couldn’t help himself. A few f/x shots were tinkered with to fix flaws noticeable on the original print. The most notable change was the glass reflections from the pane that separated Ford from the real king cobra in the Well of Souls. These corrections are minimal and don’t change the film, thankfully. I am disappointed that the first film was renamed Indiana Jones and the Raiders of the Lost Ark to make it conform to the rest of the set. Does the term classic mean anything anymore?

Dr. Jones is fresh home from his most recent adventure. Unfortunately, it wasn’t very successful. His fellow archaeologist and nemesis, Dr. Rene Belloq, has taken an impressive idol from him. As he returns to his teaching gig, he attempts to parlay what trinkets he did bring back into a ticket to retrieve the idol. Unfortunately, the feds have other plans. It seems the Nazis are looking for the Ark of the Covenant and are seeking a vital clue from Indy’s old mentor, Dr. Ravenwood. Ravenwood is dead, but his daughter is very much alive, running a bar in Nepal. She has the necessary piece, but Indy’s not the only suitor. Together they go in search of the Ark, attempting to stay one step ahead of the Nazis and their expert, none other than Belloq. It’s a race all over the world, and finally a close encounter with the divine, and perhaps God isn’t too happy with the Nazis. Indy proves a dynamic character, globetrotting and raiding tombs long before Lara Croft got into the picture. OK, she looks a little better. Raiders of the Lost Ark was the mold from which a genre sprang.

Raiders Of The Lost Ark is presented in its original aspect ratio of 2.39:1. The ultra-high-definition image presentations are brought about by HEVC codecs at bitrates between 50 and 70 mbps. The print is immaculate. No evidence of any artifacts or specks will be found. Colors display a vibrancy that defies the age of the film. Blacks are perfectly layered and deep. Flesh tones are reference. The many vistas that provide the backdrop for Indy’s adventure are simply breathtaking. It’s obvious all these films were carefully preserved, and care was taken with the transfers. Everything is improved over the Blu-ray here. Colors really pop where they hadn’t before. The black levels likely demonstrate the greatest leap forward in quality. Texture is also off the charts. Indiana’s hat looks great. Facial close-ups also benefit tremendously from the 4K releases. There’s so much detail there, and you can almost see Indiana aging from film to film with an extra line here a bit of gray on the stubble there. It’s worth cashing in for these.

The Atmos tracks default to a really solid 7.1 mix. While not always very aggressive, this track pays attention to detail. Subtle nuances of the sound are brought to life not by mixing it louder, but by placing it appropriately in the mix. This track shows an understanding of what the distinct channels were always intended to be used for. John Williams gives us one of his most inspiring scores, and the production here doesn’t let us down. Don’t you just feel right there with Indy when you hear those marvelous brass overtures? Bass response is superb, and there is no evidence of distortion in any frequency range. I was greatly impressed by the rolling boulder scene. That’s juiced up a bit, I believe. Dialog is delightfully well placed.

There are no new extras here. You get three trailers. You do get a mini-poster.

They’ve just finished shooting on the final Indiana Jones film and the first one since Disney took over Lucasfilm. I have mixed emotions. After watching Robert DeNiro kicking a guy looking like classic Bobby D but moving like 100 year-old senile DeNiro, I hope Harrison Ford can maintain the Indiana Jones stature throughout. I know there’s going to be flashbacks with Ford de-aged, and I hope these guys do better than Scorsese did. These films on UHD are just the thing to get us through the wait. I’m worried Spielberg isn’t directing, but very happy George Lucas doesn’t have anything to do with it. Paramount is doing a great job of bringing their library to 4K. If you have already picked up these films in 4K there isn’t much new here. But if you’ve waited for the best of the films to peel itself off from the others in 4K you’re in luck. “Inside the Ark are treasures beyond your wildest aspirations.”

Gino Sassani is a member of the Southeastern Film Critic's Association (SEFCA). He is a film and television critic based in Tampa, Florida. He's also the Senior Editor here at Upcomingdiscs. Gino started reviewing films in the early 1990's as a segment of his local television show Focus. He's an award-winning recording artist for Omega Records. Gino is currently working on his 8th album Merchants & Mercenaries. Gino took over Upcomingdiscs Dec 1, 2008. He works out of a home theater he calls The Reel World. Favorite films: The Godfather, The Godfather Part II, The Body Snatcher (Val Lewton film with Karloff and Lugosi, not the pod people film), Unforgiven, Gladiator, The Lion King, Jaws, Son Of Frankenstein, The Good, The Bad And The Ugly, and Monsters, Inc.
Eraser: Reborn (Blu-ray) Ninja Badass