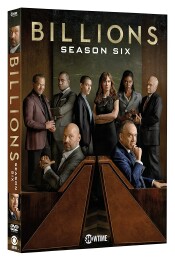 Every era has their Hollywood good guys and their Hollywood bad guys. Back in the early days, we had Nazis to pit against our heroes. When they didn’t quite fit the bill, we had the Japanese. For much of the Cold War, we had great Russian villains to test the mettle of our heroes. Terrorists fit the bill a lot today, but perhaps the only group hated by large segments of American audiences more are the 1%ers. Anyone who makes an obscene amount of money must have cheated to get there. It doesn’t hurt that financial power companies have been immersed in the last couple of economic disasters. Michael Douglas taught us that greed is good, and while every single one of us wants to be at the top, it’s not quite the politically correct thing to express … at least out loud. Billions gives us the kind of power broker who is just too much fun to hate. It’s the classic struggle of good guys versus bad guys. Of white hats versus black hats. But nothing is that simple in Billions, and if you haven’t yet spent some time with the likes of Paul Giamatti and Damian Lewis as Chuck Rhoades and Bobby “Axe” Axelrod, you’re missing one of the more compelling dramas on television right now. But we lost Damien Lewis and his Axelrod character last season. It’s a blow, to be sure, and I expect he’s going to show up at some point when the series leads us to its final episode, but we’re not there yet, and the show must, and certainly does go on with Billions The Complete 6th Season.

Meet Chuck Rhoades, played brilliantly by Paul Giamatti. When we first met Chuck, he was the US Attorney for the southern district of New York State. In that position he loved to take down the arrogant, rich power brokers who scoffed at the laws and made their fortunes any way they could. His white whale was Bobby Axelrod. Last season it appeared that he finally had his man when Axelrod managed to sneak away at the last minute, leaving his billionaire rival Mike Prince, played by Corey Stoll, as the new owner of the firm. And so there are big changes afoot going into the sixth season as the show undergoes its biggest changes.

“Tango and Cash, or is it Binly stock and Bloom? I can’t quite tell. But I like it.”

Prince is the new boss, and many members of the staff are now trying to find out just exactly how they fit into the new world order. Prince has his own right-hand man, and that’s Roger “Scooter” Dunbar, played by Daniel Breaker. He’s the most interesting and best-played character of the new season. He’s Prince’s fixer, taking over the duties usually taken by my favorite Billions character, David Costabile’s Mike “Wags” Wagner. Prince would love to get rid of Wags. He was Axelrod’s confidant, and it would put a little fear of God into the others to start doing things his way … or else. But Axe took care of his buddy, and his contract gives him an $80 million buyout if he’s fired for anything but cause. But Prince soon learns that Wags has huge value, and one of the season’s better story arcs has Wags and Scooter go from rivals to starting to work together. Why would they do that? They still have the same enemy in Chuck, who has shifted his obsession from Axe to Prince. The show’s trademark plot threads remain with both moving to stop each other in their tracks.

To keep the cat-and-mouse game alive, Prince still has Chuck’s ex-wife Wendy in the fold as the firm’s psychological expert and motivator. She’s played by Sons Of Anarchy veteran Maggie Siff. She’s a therapist who complicates the whole thing, because she works for Prince as she did for Axelrod as his sales team inspirational coach and his own father confessor. She’s being forced into the middle of this brewing confrontation. I have to say, I never liked Siff in Sons Of Anarchy. I always thought she was a weak character. This time I found she provides a crucial voice here that allows the show to move so effortlessly between these two worlds. This is the kind of role I wish I had seen in Sons. It’s been rather delightful watching these two powerhouses fight until it nearly destroyed them both. But now things are different.

What about the rest of the cast? Axe’s best earner, Dollar Bill, has left to start his own firm. Prince is, at least on the surface, trying to make it look like he’s going to be 100% legit. No more debauchery in the office to keep the kids hyped up. He even throws out investors, and their cash, who don’t appear to meet his standards for what he egotistically calls Mike Money. Obviously, he’s got some big plans, and you know Chuck’s going to be working overtime to thwart them. It helps that Prince snipes Chuck’s right-hand, and now Kate Sacker, played by Condola Rashad, is working for the other side and is pretty motivated to bring Chuck down. What we end up with is something like mutually assured destruction, and it sure looks like both sides are OK with that.

Taylor, played by Asia Kate Dillon, has the most awkward role this season. She’s trying to figure out where she fits and gets mixed signals from Prince. I’m not really sure how to define the character this season, and I’m not sure the show has figured it out either.

So what is the big play this season? Prince is making a big land grab, and we discover he’s trying to get the Olympic Games to New York City. Chuck is out to stop it, and the two play games on the political arena that as expected cost them both dearly. But Prince has even bigger plans, and the games were only a stepping stone to that big reveal at season’s end.

I have to say that while the writing and performances remain high for this show, I don’t find the dynamic between Prince and Chuck as compelling as it was with Axelrod. Corey Stoll is great in the part, don’t get me wrong. Where it falls flat are those built-up encounters. In the past the show was always teasing us about those rare face-to-face encounters. The air was electric, and the chemistry in this rivalry was some of the best I’ve ever seen. Those encounters this year really don’t measure up. I think the show’s writers kind of see that themselves, and they don’t quite give those encounters the time and depth they gave before. That’s the explosive moment I truly miss, and that’s why I expect there will be a short return as the series winds down.

The show still has compelling drama and a strong cast. I still find myself enjoying the series as much as I used to; I just don’t get that big bang for my buck in those face-to-face moments. The series has at least another year to go, and I suspect as long as Giamatti is up for the task, it will continue. You get a feature on guest stars and a character profile along with all 13 episodes on four discs. There’s no Bobby Axelrod, but have patience. Give the season a chance. “What do you say to once more for old times’ sake?”

Gino Sassani is a member of the Southeastern Film Critic's Association (SEFCA). He is a film and television critic based in Tampa, Florida. He's also the Senior Editor here at Upcomingdiscs. Gino started reviewing films in the early 1990's as a segment of his local television show Focus. He's an award-winning recording artist for Omega Records. Gino is currently working on his 8th album Merchants & Mercenaries. Gino took over Upcomingdiscs Dec 1, 2008. He works out of a home theater he calls The Reel World. Favorite films: The Godfather, The Godfather Part II, The Body Snatcher (Val Lewton film with Karloff and Lugosi, not the pod people film), Unforgiven, Gladiator, The Lion King, Jaws, Son Of Frankenstein, The Good, The Bad And The Ugly, and Monsters, Inc.
Ninja Badass Lightyear