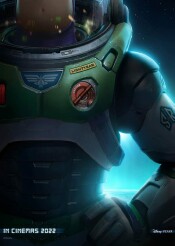 Well, if you have ever wondered what the basis of the Buzz Lightyear action figure that Andy gets in the first Toy Story movie was, the wait is finally over. While it was briefly mentioned in the original film that the action figure was based a movie that the Andy character had seen, outside that mention, the character’s background remained predominantly a mystery … until now. Now with Lightyear, we finally know Buzz’s backstory. However, before we get into that, I believe that it is important to address the elephant in the room: the replacement of Tim Allen with Chris Evans. As expected, removing Allen as the voice of a character that he has been synonymous with since its inception, a character that he has played for nearly 25 years and across four films, was a bitter pill to swallow. On the surface, it would seem that Allen’s appearance was a repeat of what happened with his popular Fox television series, which was cancelled and eventually revived. However, according to the film’s director, Evans was always his first choice to voice the character for the origin story. He goes on to say that Allen’s version of the character was more comedic in nature given the context of the character, while this version balances Buzz’s comedic side with the seriousness and ambitiousness of the plot.

In order to provide context between this film and previous films featuring the character, a framing device is provided at the film’s opening that explains that in 1995, a young Andy Davis sees Lightyear, a film that inspired the Buzz Lightyear toy line. This was a good incorporation in my opinion, as it helps the audience to separate this film from the popular franchise. That aside, the film somewhat drops you in the mix of things with very little context to explain Buzz’s current mission, which ends up resulting in the exploration vessel he is piloting becoming marooned on a planet on a habitable yet hostile planet. A little further detail regarding the nature of the initial mission would have helped me to acclimate to what brought the characters to this particular moment.

It’s only a temporary disorientation, as things quickly unfold as hostile forces on the planet attack and Buzz makes a mistake which frames the character’s thinking for the rest of the film. The level of responsibility that he feels over the split-second decision he made is a central component of the plot and impacts his relationship with several characters, to include his commanding officer, Alisha Hawthorne (voiced by Orange Is the New Black’s Uzo Aduba) and her granddaughter Izzy (voiced by Keke Palmer). Both relationships offer windows into Buzz’s psyche. When it comes to Alisha, Buzz feels that he let his commanding officer down and is so blinded by his determination to fix his mistake in order to make things right for her, that their friendship ends up taking a back burner to his ego. With Izzy, these same feelings are present, but not as impactful, as Izzy is less willing to take a back seat and demands to be directly involved in his mission. This makes the relationship between Buzz and Izzy the more impactful dynamic. Granted, Buzz and Alisha’s relationship was built on mutual respect, but it was actually Izzy who challenged Buzz and made him better.

The plot and format of the film were straight out of the Disney playbook. It starts with our main character making a mistake that has significant impact on themselves and those close to them; said character then tries to take on the sole responsibility of righting their wrong; they are joined by a group of well-meaning but ill-equipped secondary characters; there is a friction period between the main character and the secondaries, but it ultimately through working together that the group is able to accomplish their goal. The film does try to throw in a plot twist. However, this plot twist is another frequently employed twist, and in the case of this film, did not have the desired impact.

While the film does not necessarily break new ground, it is still an entertaining experience. There are enough action sequences to keep the plot moving, and the balance of lightheartedness with the seriousness of the situation keeps it from becoming stale. One of the film’s best jokes in my opinion, a play on the character’s famous catchphrase, was spoiled due to its inclusion in the film’s promotional material. I wished they would have held it back, as I think it would have produced a great laugh if it had been.

Lightyear is good, wholesome family-friendly experience that is worth heading to the theater for. While it follows Disney’s playbook, there is something to be said about this proven formula and verified recipe for success. There is no question that this film will take the box office this weekend. My sole regret is not seeing it with my family. However, knowing my family, I will end up seeing it again, which I am not entirely upset about.

Jeremy Butler is a film school graduate of the International Academy of Design and Technology. He is been writing for Upcomingdiscs since 2012; however, movies have played a big part of his life for much longer. Favorite genres include horror, science fiction/fantasy, and comedy. Favorite movies are V for Vendetta, Boondocks Saints, Kiss Kiss Bang Bang, and The Godfather.
Billions Season Six Offseason (Blu-ray)