Posted in: Disc Reviews by Brent Lorentson on June 21st, 2022 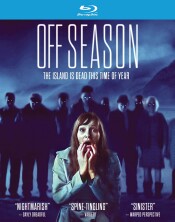 Offseason is the type of film we just don’t get a lot of anymore. It’s a film that heavily pays homage to HP Lovecraft and The Messiah of Evil and other films of the 70’s era, only there is little to no gore to show for it. There’s a strong Silent Hill vibe going on with the film, especially with the copious amounts of fog that seem to always be around.  It would seem that this film has all the makings to be a hit, especially when it seems to be going for tropes that I like in a horror film, but unfortunately this one just missed its mark by making two big mistakes. One, it was too obvious, and two, it just totally screws up the ending. I’m not expecting every movie to be the next Wicker Man, but it seems that writer and director Mickey Keating is trying so hard to be on the same level as Ti West and Robert Eggers that the film just comes off looking like a good-looking snore-fest we’ve seen before. I really wanted to like this, and it had a lot going for it, but it seems when you pull inspiration from too many sources, it can get pretty messy.

Marie Aldrich (Jocelin Donahue) gets a notice that her mother’s grave has been vandalized and that she must immediately come to the remote tourist island. We find out that her mother, Ava Aldrich (Melora Walters) never even wanted to be buried on this island, but that somehow her will was mysteriously changed, and she was still buried on the island. Marie knows little to nothing about the island, but she goes out there to see to the repairs that need to be made for her mother’s grave … trouble is that the island is being evacuated of tourists, and if Marie and her beau, George (Joe Swanberg) don’t get things sorted out in time, they run the risk of being abandoned on the island.

The idea of people wandering into abandoned towns and creepy stuff ensuing is something I’ve always loved. When Marie is first going through the town, I had high hopes. I loved the empty streets and the fog that seemed to be everywhere. I especially loved seeing Jocelin Donahue; ever since seeing her in The House of the Devil I’ve been a bit of a fan of hers, but in this film she isn’t given very much to work with but to run around town in a trenchcoat. The scenes that work as a bit of a flashback to show the relationship with Marie and her mother before she died should have all been put at the start of the film, because they take away all the tension that has been built up.

It’s no surprise when you find out that there is something not right about the locals on the island, and the execution of these moments are almost creepy, but we’ve seen it all before and done better before. Dagon (2001) comes to mind, along with the Silent Hill films, but where this film seems to lose its way is that it doesn’t set up a proper mythology for the town. This is frustrating, because if you are going to blatantly pillage from these great films, you have enough to create something pretty intense and creepy with these townsfolk. As it turns out, with the big reveal in the third act, it feels obvious and just doesn’t feel like enough of a payoff.

The cinematography is what saves this film. There are some simple yet beautiful shots of Marie running through the small town, and the fog certainly looks good on camera. The scenes on the bridge kept having me thinking of The Beyond, and the scenes with the drawbridge are just about as close as this film comes to creating suspense. What bothered me is that while Marie is trapped on the island, she seems convinced that the only way off is over the bridge … Couldn’t she find a boat or paddleboard somewhere on the island and simply escape that way? But this is a story that when you start asking questions, you find more holes, and the movie simply sinks faster.

Offseason is presented in the aspect ratio 2.39:1. The 1080p image is arrived at with an AVC MPEG-4 codec at an average of 28 mbps. I really like the overall look of the film. The blue and green hue reminds me of the films from the Lucio Fulci catalog. At times the film is simply too dark to see detail; then there are moments where it seems there is enough “magic light” for you to see plenty of detail. Less is better in this sense, because it helps with building the tension that surrounds the setting of the town. The constant fog helps create atmosphere when the natural setting is too appealing to be spooky. The skin tones seem a bit soft, and there is a bit of saturation, though it’s not really an issue. The lack of separation with the blacks makes it hard to see much detail in the night scenes.

The 5.1 DTS-HD Master Audio track is a little underwhelming when it comes to creating a creepy ambiance. This is my biggest complaint, I wanted more out of this sound design, and it just didn’t deliver for me. The dialog is clear, but this just did very little for me in building any suspense.

Shudder has had a pretty good streak of putting out some fun and entertaining films.  Offseason is the kind of horror film I’d recommend to those who are new to the genre and are not a fan of gore. While the story seems a bit derivative, there is a nice style to it that at least keeps the viewer visually engaged.

Brent Lorentson is a horror writer and film critic based out of Tampa, Florida. With a BA in Digital Film, he co-wrote and co-directed Scavenger Hunt. His short stories have appeared in various horror anthologies. In 2019 his short script Fertile Blood will be a part of the anthology horror film Slumber Party. He is currently working on his first novel A Dark and Secret Place set to be released in late 2019. Favorite Films: Taxi Driver, Fight Club, I Saw the Devil, The Wild Bunch, Dawn of the Dead, A Clockwork Orange, Pulp Fiction, Heathers, The Monster Squad, and High Fidelity.
Lightyear Exclusive Interview With Joyce Meadows From The Brain From Planet Arous