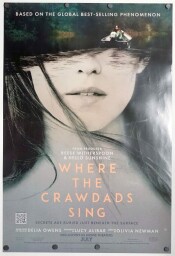 “I, like you, have heard the tall tales told about the Marsh Girl. An abandoned child. A little girl surviving on the marsh on her own, reviled and shunned.”

Where The Crawdads Sing took a rather unlikely journey to the big screen. It was the first novel from Delia Owens, who spent most of her life as a scientist focusing on Africa and coming up with some rather controversial theories. She went to Africa with her husband in 1996 and before long was embroiled in a situation where a documentary was shot that depicted the murder of a poacher. They left Africa facing murder charges, and now in her 70’s Delia has tried her hand as an author of fiction. It shouldn’t be too surprising that her maiden novel focused on a woman who was believed to be a killer. There’s no question that some of her own life bled into the story, but in her 70’s Delia Owens had a bestseller on her hands which was given more attention when Reese Witherspoon made the novel one of her book club selections, something Oprah was also able to do for many titles in her day. Witherspoon soon obtained the film rights of the film, and the result is a movie with a wonderful premise and set against some of the most beautiful locations in the southern United States. Add a pretty solid cast and you should have a great film. Something gets a little lost in the translation, but you do end up with a wonderfully atmospheric film that is likely to be a heavy contender for SEFCA’s Gene Wyatt Award that goes to the film that best exemplifies the south. There’s still a full six months to go, but it has the inside track right now for my vote.

Kya Clark, played by Daisy Edgar-Jones, had a rough life as a young child. She was abused by her father, and the family lived in an isolated cabin out in the swamp lands. She had very little contact with the outside world. Her mother and her siblings all left when they had a chance, leaving her alone with her abusive father who eventually left as well. She became a young teen left to fend for herself. There are kind of two stories going on here at once. The first continues with the young Kya and how she learned to survive. Kya had limited contact with a couple who ran the local store and helped her by buying shellfish she collected out in the swamps. The friendly couple are played by Sterling Macer, Jr. and Michael Hyatt. Along the way she had two relationships with boys. First there is Tate, played by Taylor John Smith. They have a good kind of chemistry and a rather innocent kind of loving relationship. He notices her drawings of the plants and animals of the swamp and encourages her to try to get them out there. When Tate leaves to go to college, he doesn’t keep a rendezvous, and it sends her into a somewhat bitter rage. Later she hooks up with Chase Anderson, played by Harris Dickinson. When Chase is found dead at the bottom of a high observation tower, everyone in town believes that Kya, whom they call Marsh Girl, must have done the deed. That’s where we find the older Kya now on trial for the murder.

As the film evolves, director Olivia Newman attempts to tie events of one era to those of another. We’re to believe that things that happen later bring back certain memories that we are treated to on screen. Here’s where the film falls apart. Newman doesn’t really do a good job of keeping the narrative smooth. It gets a bit choppy and awkward in several areas, and I found there were times I was left scratching my head. The best part of the narrative remains, however, and it’s worth the struggle with the film’s structure. The performance Of Daisy Edgar-Jones is quite simply amazing. She doesn’t often need dialog to get her emotions across, and she knows how to act with her eyes. It was that more than the short-shrift backstory that pulled emotionally on me as a viewer. She carries that completely on her performance, and it’s one that deserves your time.

The film also takes complete advantage of the beautiful locations in the swamp. Edgar-Jones truly becomes one with her surroundings, and this is what will win you over and likely earn the film our Wyatt award. As awkward as the narrative was, it’s a truly atmospheric world that is inhabited by one compelling character that carries it all the way to the finish line. Kya eventually has the success of her drawings to change her life, and there’s a rather abrupt but I think appropriate stunner in the end that forgives a lot of Newman’s missteps along the way. “Every creature does what it must to survive.”

Gino Sassani is a member of the Southeastern Film Critic's Association (SEFCA). He is a film and television critic based in Tampa, Florida. He's also the Senior Editor here at Upcomingdiscs. Gino started reviewing films in the early 1990's as a segment of his local television show Focus. He's an award-winning recording artist for Omega Records. Gino is currently working on his 8th album Merchants & Mercenaries. Gino took over Upcomingdiscs Dec 1, 2008. He works out of a home theater he calls The Reel World. Favorite films: The Godfather, The Godfather Part II, The Body Snatcher (Val Lewton film with Karloff and Lugosi, not the pod people film), Unforgiven, Gladiator, The Lion King, Jaws, Son Of Frankenstein, The Good, The Bad And The Ugly, and Monsters, Inc.
Star Trek: Lower Decks – Season Two (Blu-ray) Paws of Fury: The Legend of Hank