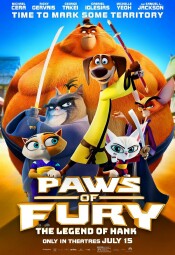 Some of my favorite films are those directed by Mel Brooks.  Blazing Saddles, Spaceballs, Young Frankenstein, The Producers, and the list goes on and on.  He has an ability to create a wonderful parody that blends comedy and homage to so many great films.  The films are those quite frankly that you can watch over and over again even if you have heard the joke fifty times in a row.  (I used to recite Spaceballs by heart until my college roommates at the time threatened to beat me to a bloody pulp)  So imagine my surprise when in the year 2022,  we get an animated film with Mel Brooks in one of the supporting voice roles, and it smells quite a bit like Blazing Saddles.  Let’s take a look at Paws of Fury: The Legend of Hank.

Before we start this fine film, we are treated to a Big Nate short, since this is Nickelodeon and all.  I thought it was named How to Make Ice Cream, but it’s actually named Bad Hamster, according to online sources.  It starts out with Nate and a few of his friends making an online video about how to make ice cream.  A few minutes later, I’m watching an awful dance number from a hamster who is singing “Don’t Shove Me in Your Pocket”  while pooping out other hamsters.  I’m not kidding.  This is worse than “Frozen Fever”, which was in front of the live-action Cinderella from 2015.

Let’s get to the film.  We start with a song where we learn a little history (think feudal Japan) about a society of cats that is ran by the Shogun Toshi (voiced by Mel Brooks).  Possible successor to that post is one Ika Chu (voiced by Ricky Gervais), who controls one of the smaller kingdoms.  The Shogun is to visit him in three days, and the only thing that’s keeping that visit from being perfect is the town of Kakamucho.

Ika Chu tells his loyal cats that they need to wipe Kakamucho off the map and force the town’s cats to leave.  So they decide to send a bunch of bandits to the small town.  That shouldn’t be a problem; after all, that town does have a resident samurai.  Except when the bandits get there, the samurai decides to turn his tail and run away.  The town is overrun, and the people are officially in need of a new samurai.  They send a request to the Shogun.

The Shogun decides to pass on that responsibility to Ika Chu (which when Mel Brooks says his name it sounds awfully a lot like “Nike Shoe”).  Ika tries to figure out where he can find the worst samurai imaginable as he watches a dog named Hank (voiced by Michael Cera) about to be executed.  Hank is able to escape that fate momentarily but finds himself right back in his own cell after a failed digging attempt.  Then suddenly Ika Chu has an epiphany.   He’ll make Hank a samurai and send him to the town of Kakamucho.  Hank will even get his own official cup.

Hank has aspirations to become a samurai, so he’s the perfect lackey for Ika’s plan.  However, Hank doesn’t exactly have the warmest welcome when he gets to the town of Kakamucho, and the cats try to exile him from the town since dogs are forbidden.  It’s only when an aging catnip-addicted samurai named Jimbo (voiced by Samuel L. Jackson) takes a shine to Hank that perhaps things will change for the better.  Maybe it can be saved after all.

As everyone knows already, this is an animated film, so Hollywood logic would tell us that it should be aimed at young audiences, which is true in part for some of the scenes, but the majority of the comedy here is aimed at adults with a boatload of sarcasm.  It also breaks the fourth wall a lot, which is usually right over the young kids’ heads.  The best joke that I probably found is one that involves the Shogun character receiving and responding to a tweet.  (I won’t spoil anything else about it.)

There are also jokes about beans and farts, punching horses, race relations between cats and dogs, and a whole bunch of characters that seem oddly familiar.  As I mentioned in the introduction, this film shares a ton with arguably the best comedy of all time, Blazing Saddles.   There are also jokes here from other films such as Robin Hood: Men In Tights and plenty of other Mel Brooks films.  I even caught a joke or two from Three Amigos as well.  Most people would agree that you can’t remake Blazing Saddles in this unfortunate time of political correctness.  Unless you make a cartoon with cats and dogs.  Then go right ahead.

It’s freaking brilliant.  I laughed wholeheartedly at the film, and my wife, who had never seen Blazing Saddles (we’ll remedy that soon enough) actually enjoyed it too .  She even wanted to own the movie once it hits disc (I can only hope it gets a 4K).  In my near eight-year marriage, she’s only uttered that phrase two or three times.  The voice acting is spot-on, and it’s a great film.  The only negative is that kids might not get a lot of the jokes.

As I was researching this film for the review, I of course came upon a lot of other reviews.  The most misguided one read “A Blazing Mess.”  (Personally, I think it’s a Blazing Success.  Write that headline, folks!)  But sadly, the film won’t do well (it ended up being only #6 in its first week) and we’ll probably have to wait years before it reaches a cult-like status  (which I’m about 90% positive it will).  Take it from me, if you loved Mel Brooks’ films from yesteryear, you should go see Paws of Fury: The Legend of Hank.  It’s a film where the comedy is genuine and dripping with sarcasm while paying homage to the great Mel Brooks.  A very hearty recommendation, and please go see it (and then re-watch Blazing Saddles as necessary).  Enjoy.

BTW, if you made it this far in my review, thank you.  There is a post-credits scene that you should stay for if you didn’t eat too much popcorn and drink a big gulp-sized sweet tea.  You’re welcome.

Michael Durr has been reviewing movies for the better part of fifteen years now. He primarily enjoys thrillers, sci-fi, animation and even a little courtroom drama. His favorite films include Escape from New York, the Goonies and anything with Alyssa Milano. When he’s not praising Kurt Russell as the greatest actor of our time or scratching his head over a David Lynch flick, he’s spending time at home in Texas with his lovely wife, Lori and his amazing son. How they put up with him is a mystery, but even Basil Rathbone doesn’t have the time to solve that one.
Where The Crawdads Sing Panda! Go Panda! (Blu-ray)