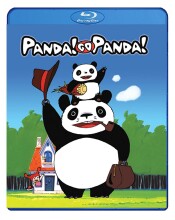 Unfortunately, this film was a little immature to gain the Nalyce stamp of approval. While Japanese animated films have been her bread and butter in recent years, her tastes venture more towards anime such as Inuyasha and My Hero Academia. When it comes to Panda! Go Panda!, it was just too kiddie for her. Had this been a year or two ago, she would have been all about it. Perhaps there will be such an opportunity with my son, but given that he is only a week old, time will have to tell. As far as I’m concerned, it was a cute story if impractical. I recommend a suspension of belief if you chose to watch the film. Given that a suspension of belief is a prerequisite for all animated films, that shouldn’t be too much to ask. While I understand the need for this suspension of belief, I’m afraid I wasn’t fully able to achieve it at times.

Divided into two short-film formats, the story follows a young girl named Mimiko, who is left on her own when her grandmother leaves to attend her grandfather’s memorial service in Nagasaki. Having never known her parents, this leaves Mimiko alone. Let’s pause here: this is a point where suspending belief was difficult. By all accounts, Mimiko is a little girl, not even a teenager, so the idea that her grandmother would leave her with no supervision whatsoever is a hard thing to sell. I would have bought it more if the events took place while traveling with her grandmother or with distant relatives looking after her. However, as is, I am unable to accept that idea. Maybe it’s the parent in me.

Moving on, Mimiko encounters a baby panda named Panny in a bamboo grove while out. The two quickly establishing a bond and with the inclusion of Panny’s father, PapaPanda, this trio form the surrogate family that Mimiko is lacking up this point. This naturally leads to some adventures, particularly when Panny follows Mimiko to school and ends up fleeing from her classmates. The key complication comes from a local police officer and zookeeper who are looking to acquire Panny and his father in order to return them to the zoo that they escaped from.

Thankfully the film is English dubbed, which was a plus. This essentially removed any distraction that would have been prompted by the continued reading, thereby making it possible to focus on the story. Overall, the story follows the blueprint set out by similar stories. The evildoers attempt to capture the pair, which eventually puts one of them in a potentially life-or-death situation. Though it follows the blueprint, it still managed to be entertaining in regards to the circumstance that frames the life-or-death situation. It even manages to infuse some heart into the tale by displaying the lengths that Mimiko is willing to go to in order to protect her new family.

The second half of the film has a similar setup and concludes in a similar fashion as well. I initially felt the film lacked modernization, but further research revealed that the film was initially released back in 1972, and its success is what prompted the second short (Rainy Day Circus). This knowledge reframed my thinking regarding the two shorts. Initially, I wondered why the creators were motivated to create two shorts rather than a full-length film. Given that the popularity of the first short is what sparked the second, that provided much-needed context. Time still plays a factor, as tropes such as the runaway train are less familiar in this modern time. Even so, when viewed through the historical context, I was able to have a great appreciation for this film and recognize how groundbreaking it was during its time period. Unfortunately, this will not get it the Nalyce stamp of approval, given her lack of appreciation for things older than her (I’m still trying to educate her on what a quality Disney movie is), but with me, it leaves an impression.

In summation, as long as you are able to achieve the much needed suspension of belief and appreciate the film’s historical position, you are likely to enjoy Panda! Go Panda. And while the film may have missed the boat with my first child, I have a strong belief that it will capture the attention of my second born when the time is right.

Jeremy Butler is a film school graduate of the International Academy of Design and Technology. He is been writing for Upcomingdiscs since 2012; however, movies have played a big part of his life for much longer. Favorite genres include horror, science fiction/fantasy, and comedy. Favorite movies are V for Vendetta, Boondocks Saints, Kiss Kiss Bang Bang, and The Godfather.
Paws of Fury: The Legend of Hank Downton Abbey: A New Era (Blu-ray)