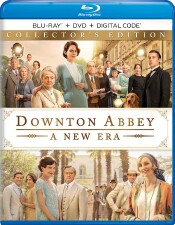 “The modern world comes to Downton.”

Downton Abbey spent six years on television and has amassed 52 episodes. In that relatively short run the series has also managed to collect over 200 award nominations and several Golden Globes along with other prestigious awards. Let’s not forget a rather loyal fan base that has watched each episode with anticipation of the next sharp barb or character revelation. The fans have been vocal and strong enough that a new film franchise has been anticipated to fill the void left by the series and the first film. In one of its years it was the number-one binged series in the world. That’s a lot of power, and it’s little wonder that all of these ingredients are expected to create a little box office gold. But film franchises from television shows rarely go on to such golden heights. There are some notable exceptions, to be sure. But even here, expectations and changing caretakers often lead to both high points and flops. The Star Trek franchise is a perfect example of those kinds of ups and downs. Mission Impossible is an example of shows that have to be completely retooled to hit the high numbers. Where has Downton Abbey fit in this equation so far? I rather suspect the jury is still out, because the arrival of COVID put a bit of a spanner in the works, both in time between films and available cast. One thing I can tell you with complete confidence: the film will absolutely entertain fans of the series. There’s no retooling to be found here, and you can expect the same kind of drama that you’ve been mainlining for 52 episodes and one film.

As the film kicks off we get an interesting announcement from Violet (Smith), who always appeared to have something to stir up the family around her. This time she drops the bomb that she has inherited a villa in the south of France. A man has left it to her instead of his own wife and son, and now Violet wants to leave it to the young Sibbie, who unlike her cousins doesn’t have an estate to fall back on when she is older. So it’s decided that the family will accept an invitation from the wife and son to stay at the villa and see where it all lays out. Violet won’t be attending, as she is suffering from an unknown but widely accepted end of life illness. But there’s another shocking development that keeps Mary (Dockery) behind at Downton along with other members of the family and servants.

A movie company would like to make their latest film called The Gambler at Downton, and while most of the family doesn’t care for the idea, it will bring in a great amount of needed cash, so an agreement is made that it can happen while much of the family is in France. The production arrives with its two stars of the Silent Age. The Wire’s Dominic West plays Hollywood leading man Guy Dexter. He’s secretly gay and ends up attracted to Barrow (James – Collier) who is in need of a win as he looks back on his life in a sad light. The leading lady is Myrna Dalgleish (Haddock), who is more than a little bit spoiled and doesn’t treat the staff with much regard. Things change for everyone when the studio decides to turn it into a talkie. It’s the late 20’s, and all of the studios are trying to jump on the talkie bandwagon. The problem is that some actors like Guy Dexter can make the transition with ease. Others like Myrna have unflattering voices, and she’s about to see her career end. The film is saved when Mary ends up dubbing the actress’s voice. Another problem is that of a script. There was no need of a full screenplay, and none of the dialog outside of the lobby cards was ever needed. It turns out that servant-turned-teacher Mr. Mosely (Doyle) has a flair for writing these things and now has yet another career to embark on along with a lady to share it with.

There are really two stories going on here, and the one at Downton with the film crew is by far the more entertaining of the two. The main characters of Lord Robert Grantham (Bonneville) and his wife Lady Cora Grantham (McGovern) find themselves in an awkward narrative that really never ends up compelling in any way. The only highlights here are Carson’s (Carter) attempt to Englishify the French servants. The fight over the villa never really materializes, as they end up not fighting about it at all. The only other interest is a rather forced storyline focused on an old portrait of Violet that continues to bring up the question not only of the week she spent with the deceased man but perhaps Robert’s parentage. It’s a weak part of the film and likely the most hindered by the COVID protocols in place as the film was in production.

Back at Downton, Mary is having some doubts because her husband is away and she starts to fall for the film’s producer. The big payoff feels a bit paddedh as the servants are allowed to dress in fancy clothes to play the upper class at a big banquet scene in the film. They get to gather around the main dinning table and act out their opposites. Always with this many main cast members, not everyone is going to get featured.

The show has always relied on a balance of time spent both with the wealthy master family and the group of servants who keep the day-to-day things running smoothly. It’s a formula fans of the 1970’s British television series Upstairs Downstairs know too well. Here the family isn’t merely wealthy. They are aristocracy, and it’s not just a big mansion, but grounds akin to castles and royal residences.

Of course, all of the fun won’t be found with the servants. Maggie Smith plays the family matriarch, Violet. She completely steals any scene in which she finds herself, and the amazing thing is how effortlessly she accomplishes the feat. As with the series, Violet is the real queen here. She’s the queen of the biting wit. She can take down the most assured opponent with barely a handful of words. I’m not sure she ever speaks more than a handful of lines at a time throughout the movie, but she makes the most out of every syllable. I get the impression that she’s what the audience really came to see … or rather hear. Her most challenging fencing opponent happens to be her cousin, Maud Bagshaw (Staunton). When word gets out about the villa and the mysterious relationship behind it, you get to see Maggie Smith at her best.

Downton Abbey is presented in its original aspect ratio of 2.39:1. The 1080p image is arrived at with an AVC MPEG-4 codec at an average 40 mbps. This high-definition image presentation does a pretty fine job of taking advantage of the wonderful period production design. There is a lot of detail to be enjoyed. I found the kitchen scenes to be incredibly rich in texture and detail. The color palette is rather warm, particularly in exterior scenes, which are a bit heavy on the yellow. But still the finery of the dress uniforms particularly stand out with the little bit of vibrant color to be found here. The same for some of the dresses, most notably a rich blue dress worn by Mary. The shots of the yacht that takes the family to France provides a wonderful vista indeed. Then there is the first establishment shot of the Abbey itself. It’s a welcoming shot that I’m sure fans of the show will find quite moving. Black levels are good, and there is a fair amount of shadow definition.

The DTS-HD Master Audio 7.1 is quite immersive. The music is best served by the wide surrounds. The familiar theme wraps itself around you quite pleasantly. Elements like surf and crowds do a nice job of filling that sound field. Dialog cuts through as sharp as the wit of Maggie Smith’s character. I noticed an unusual attention to the details of space. In the final ballroom scene the banter is rather a nice touch.

Good To Be Back: (3:38) The cast and crew talk about how exciting it was to return to the location and each other.

Return To Downton Abbey – The Making Of A New Era: (11:37) Cast and crew take us behind the scenes of the production with the COVID protocols plainly in sight. The focus is the opening wedding scene.

A Legendary Character: (4:10) This feature looks at the wonderful Maggie Smith and her Violet character. There are plenty of clips from episodes and the first film. It’s a celebration of that cutting wit.

Creating The Film Within The Film: (9:26) We take a closer behind-the-scenes look at the authenticity captured in the 1920’s film production. They found actual 20’s cameras and equipment.

Her Majesty’s Yacht – Britannia: (2:53) This was the first production ever to be permitted to film on the actual decommissioned royal yacht.

The restructured schedule caused changes in actor availabilities and a delay in shooting. I think it shows in places that certain areas were not as fleshed out as others. The release also suffered from the pandemic at the box office. I suspect this is not how they intended or intend to go out for good. That means at least one more film will be in the offering. There’s been no word of that to date, but “I suspect they’re bound to it.”

Gino Sassani is a member of the Southeastern Film Critic's Association (SEFCA). He is a film and television critic based in Tampa, Florida. He's also the Senior Editor here at Upcomingdiscs. Gino started reviewing films in the early 1990's as a segment of his local television show Focus. He's an award-winning recording artist for Omega Records. Gino is currently working on his 8th album Merchants & Mercenaries. Gino took over Upcomingdiscs Dec 1, 2008. He works out of a home theater he calls The Reel World. Favorite films: The Godfather, The Godfather Part II, The Body Snatcher (Val Lewton film with Karloff and Lugosi, not the pod people film), Unforgiven, Gladiator, The Lion King, Jaws, Son Of Frankenstein, The Good, The Bad And The Ugly, and Monsters, Inc.
Panda! Go Panda! (Blu-ray) Batwoman: The Third and Final Season (Blu-ray)