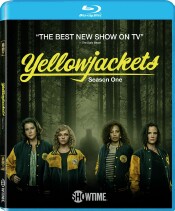 “All I know is that it was a tragedy. A terrible tragedy. I probably shouldn’t say this, but some of those kids, eh … no big loss, if I were honest. But those girls were special. They were champions.”

What happens when you take a concept like Lost and sprinkle in a little Lord Of The Flies, the 1993 film Alive, and work in a bit of Pretty Little Liars and a heavy dose of pretty much any reality series out there? You’d get Showtime’s latest creepy entry, Yellow Jackets. The new drama is one of those shows where they pack on the secrets and teases and then try to walk that tightrope of giving you enough resolution to keep you from giving up but maintain enough promise of more shockers to come so that you keep coming back for more. It’s not an easy thing to navigate, and there are times that Yellow Jackets does that pretty well. The problem that I see in the show’s future is how long can you keep this pace going? Ages of the actors is going to quickly become a factor, so I suspect this show will have to take advantage of what time they have and try to get another season or two out of the material.

The series splits its time between two time periods 25 years apart. In 1996 the Wiskayok High School girls’ soccer team are the titular Yellow Jackets. They are one of the best teams in the country. They’ve just won the New Jersey state championship, and they are on their way out west for nationals. On the way the plane crashes somewhere in the wilderness. With few supplies and some critical injuries, the girls must try to survive while awaiting a rescue that we learn almost immediately won’t come for 19 months, over a year and a half later. It’s hinted early on, particularly by a grisly opening scene, that the girls have done some horrible things to survive and maybe sometimes just to do them. There are secrets here, and one of them is not who is going to survive. How do we know this?

The second part of the story takes place in 2021, years after the crash and eventual rescue. We meet Natalie. Her 1996 version is played by Sophie Thatcher, and her adult version is played by Juliette Lewis. Since the crash Natalie has had a hard life, and it shows on her weathered features and old-before-her-time face. She’s been to rehab several times, and she’s at a pretty low point in her life. She’s startled when she gets a visit from former teammate Misty, who is by far the most compelling character of the show in both timelines. The teen Misty is played by Samantha Hanratty, and her adult version is played by the comparable Christina Ricci. Misty has become somewhat of a psychopath  and it wasn’t the crash or the events in the wilderness that made her that way. She comes by her craziness honestly. The character is both dangerous and frightening in either form. To give you an idea of where her head is at, she has a parrot she named Caligula.  I can’t speak for everyone, but it’s Misty who kept me engaged even when the story would drag or get a little too convoluted. Like most of the teen and adult actors, these two are perfectly paired, and it’s almost eerie how much it’s hard to really separate the two. They look, talk, and act the same. They’ve got each other’s mannerisms down to the point where I caught myself assuming it was the same actress. It isn’t, but the pairing is genius.

Other dominant survivors quickly come into the picture. Shauna is played by Sophie Nelisse as a teen and Melanie Lunshey as an adult. She has also been changed by the experience. She’s married but has serious insecurities that lead her to make bad and sometimes dangerous choices. She doesn’t feel attractive and ends up in a relationship that goes horribly bad. Then there’s Taissa. She’s played by Jasmin Savoy Brown in her teen version and Tawny Cypress as an adult. She outwardly appears to be very confident. She’s running for the New Jersey Senate and has a girlfriend and a son who appears to be troubled. She’s being blackmailed by someone who appears to know at least some of those wilderness secrets, and she’s likely the character here with the most to lose. You also get the impression that she might be a bit more vulnerable to the blackmail because her part in these secrets might have been greater. In 2021 these four women form a really crazy alliance to try and discover the blackmailer and save her family who are growing more and more distant.

I have very mixed feelings about this first season of ten episodes. I have to admit there are moments when you just can’t look away, and the episode ends before you’re aware any time has gone by at all. But there are other moments where the series gets too tedious, and I find myself very easily distracted. It’s not even among the time periods. I find the 2021 moments to be more compelling, while the wilderness scenes appear to take forever to really get anywhere. It doesn’t help that the opening scene from somewhere farther in the future of that part of the story we know where this is already heading, and I found myself pleading for us to just get there already. There’s too much tame teen drama in these scenes that keep foreshadowing the good stuff that just never gets here in the wilderness section.

Another fault that takes you out of the story is that I think they cut back and forth too often. I get it. You have a strong cast in both timelines, and you’re getting to something huge, but the two stories don’t always have relevance to each other because they are not unfolding evenly. I found myself far more interested in the adult story and kind of feel like the teen story should be told only in tight relevant flashbacks. That’s not going to happen, and some very good storytelling and drama will continue to suffer because of it.

As the season draws to a close, we do get some answers. We learn the identity and motive of the blackmailer, and it’s actually a pretty clever twist. The teen drama ends with some real promise that we’re going to get to the good stuff. Just not this season. I’m willing to hang on, because some of this is wickedly good. Shows like this have to walk that tightrope I mentioned. The real question is …”How did the Yellow Jackets do in that department?”

Gino Sassani is a member of the Southeastern Film Critic's Association (SEFCA). He is a film and television critic based in Tampa, Florida. He's also the Senior Editor here at Upcomingdiscs. Gino started reviewing films in the early 1990's as a segment of his local television show Focus. He's an award-winning recording artist for Omega Records. Gino is currently working on his 8th album Merchants & Mercenaries. Gino took over Upcomingdiscs Dec 1, 2008. He works out of a home theater he calls The Reel World. Favorite films: The Godfather, The Godfather Part II, The Body Snatcher (Val Lewton film with Karloff and Lugosi, not the pod people film), Unforgiven, Gladiator, The Lion King, Jaws, Son Of Frankenstein, The Good, The Bad And The Ugly, and Monsters, Inc.
The Duke (2022) Wolf Hound (Blu-ray)