Posted in: Disc Reviews by Brent Lorentson on July 29th, 2022 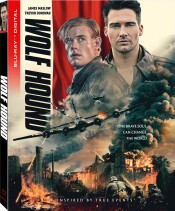 I don’t think Hollywood is ready to stop shooting movies centered around World War 2 any time soon, even if it seems they’ve filmed just about every story under the sun that you can tell about that that war.  I get it, Nazis are simply put some of the greatest villains you can have in a film, because they took part in some of the most wicked atrocities towards men and women, so you really don’t have to do much in the way of character development to get your audience to hate them. I don’t think anyone is interested in a story about a sympathetic Nazi, but is it so hard to ask for a character that comes off the screen that seems to at least have a personality? I mean, Tarantino did it with Col. Hans Landa in Inglorious Basterds (2009) with a terrific performance from Christoph Waltz, but since then the movies have been afraid to do this, and that’s the kind of thing that is so desperately missing from Wolf Hound. It’s not just the Nazis who are lacking in personality, but the entire cast of characters that reek of cliché and lazy writing that it mystifies me how this ever got made.

The film opens up with some excellent aerial photography of some authentic war planes being used for these sequences. Director Michael B. Chait was smart to utilize these planes and use them at the start of the film, because it was a good way to hook the audience into thinking that perhaps the whole film just may be as authentic. Sadly after that 20-minute mark this becomes a whole different film when pilot David Holden (James Maslow) has to parachute from his plane. Unfortunately for Holden, Major Erich Roth (Trevor Donovan), a German pilot, has crashed in the same area and is looking for vengeance for his brother’s death. If the filmmakers had kept it simple and this became a story about two men hunting one another in the woods while avoiding capture from the enemy, this could have been a stronger film, could have had some actual suspense, but instead these filmmakers decided to go big and go strong with the clichés, which means just about every scene in this film is obvious because it’s been done to death in every other war film to come before it. Down to the convoy of enemy soldiers that just happens to stop where our hero is and to go further with the cliché a soldier happens to relieve their bladder right next to our hero who is just out of the enemies sight-line because they don’t look down. That’s right, you’ve all seen this done before, and the movie plays out like a bad piece of déjà vu, but in surround sound.

The film was already doomed because of the bad script and terrible one-liners and lack of three-dimensional characters, but then the film decides to double down with visuals that instead of paying homage to the great action directors of the 80s and  90s it comes off more as a bad parody. There is literally a shootout right out of the John Woo playbook that even goes so far as to add a slow-mo shot of pigeons flying. Then we have the lighting setup for where the prisoners are being held. What the hell were they thinking?  We get drastic color temps with the blues and yellows, the yellow of course coming from the overhead lighting, but this phantom blue light — who the hell knows its source, but it is to thank for a majority of the lens flares in this film.  Do not have a drinking game where you take a shot every time a lens flare occurs; you will die from alcohol consumption within two sequences. Then we have the over-the-top diving in the air when something explodes. The amount of somersaults and twists performed here will have you thinking you are watching some extreme form of the Olympics. Factor in the edits that have us seeing the dramatic explosions multiple times as though you are watching Michael Bay’s not so great badda-booms.

Wolf Hound is presented in the aspect ratio 2.39:1.  The 1080p image is arrived at with an AVC MPEG-4 codec at an average of 28 mbps.  This is one where it is frustrating; yes, the image looks sharp and flawless, but there are points in this film that are simply painful to look at because of the lighting. Colors pop nicely; the sequences in the woods where it is dependent on mostly natural lighting I feel look the best. Those greens look incredible, though the blood looks a little too bright. The aerial stuff looks pretty good as well, though some of the CGI does look a bit off and is distracting at times.

The 5.1 DTS-HD Master Audio track is pretty much the best aspect of this film. The aerial combat scenes are where this shines the most with the gunfire and impact hits along with the utilization of the bass to make this an immersive experience. The dialog is clean throughout, and though the score is a bit repetitive, it is definitely above average for films that are on this kind of meager budget.

Commentary Track with the Director Michael B. Chait and other members of the crew.

Deleted & Extended Scenes: (10:08) There are about 12 scenes here; most are fairly short, and it is obvious why they landed on the cutting room floor.

Wolf Hound: Behind the Scenes: (30:32) This is a fairly well done piece that documents a lot of the making of the film with some interviews with cast and crew.  I do appreciate how much time is spent with actually showing how things were shot and less time with the standard interviews.

Creating the Visual Effects: (21:14) Another good piece put together with how they pulled off the aerial dogfights and other action sequences on a low budget.

For a low-budget war film, the only parts of this film that impress are the bookend sequences of the film that involve the flight cinematography. The rest of the film is a forgettable mess due to the bad script and the director’s need to pay homage and go over the top rather than keep things simple. While I don’t hate this film, I’d recommend revisiting one of the classic WW2 films from the past before picking up this title.

If you are interested in hearing what the director has to say about the film, you can also listen to the interview Gino had with him, which you can find on the UpcomingDiscs site as well.

Brent Lorentson is a horror writer and film critic based out of Tampa, Florida. With a BA in Digital Film, he co-wrote and co-directed Scavenger Hunt. His short stories have appeared in various horror anthologies. In 2019 his short script Fertile Blood will be a part of the anthology horror film Slumber Party. He is currently working on his first novel A Dark and Secret Place set to be released in late 2019. Favorite Films: Taxi Driver, Fight Club, I Saw the Devil, The Wild Bunch, Dawn of the Dead, A Clockwork Orange, Pulp Fiction, Heathers, The Monster Squad, and High Fidelity.
Yellowjackets: Season 1 (Blu-ray) DC’s Legends of Tomorrow: The Seventh and Final Season (Blu-ray)