Posted in: Disc Reviews by Gino Sassani on August 26th, 2022 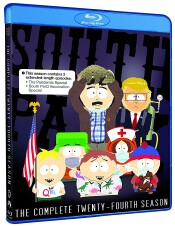 “I’ve been acting like this because I can’t take these shutdowns anymore and I’m scared what it’s doing to me. I’m looking for who to blame, saying I’m trying to help people to make myself feel better, because the truth is I just want to have fun again. I wanted to see that I could go out into the world and do the things I used to do… I want my life back. I just want my life back.”

This has been a tough year for everyone. Productions all around the world have been uprooted because of the pandemic. I guess I thought there might have been one place on this planet that was safe. OK, I made that last part up. We always knew that South Park was going to have a field day with COVID. Let’s be honest; the amount of material for the irreverent show is simply off the scales. There’s nothing like a global catastrophe to bring out the sharp wit of Trey Parker and Matt Stone. The pandemic meant we saw the long-running animated series limited just like everyone else. So instead of a 10-episode run, the 24th season of South Park is made up of two double-length “Pandemic Specials”, but just for whats and giggles, let’s call it South Park The Complete 24th Season and get a look at it in Blu-ray.

The Pandemic Special: It all starts out pretty encouraging. Cartman is, of course, loving the idea of social distancing and distance learning. He’s tricked the teacher into thinking his screen keeps freezing, and that cuts him lose to pretty much do whatever he wants for the rest of the day. He carries around a 6-foot stick, enforcing that social distance rule. For a guy like Cartman, this is the best thing that’s happened to him his whole life. And if the show had stuck with Cartman and the gang, this would have been a great show. But they are really too caught up in this idea of Randy and his Tegridy Farms pot business. It completely hijacks the episode when Randy finds out he might have been the cause of the pandemic when he and Mickey Mouse did some unspeakable things with a bat when they were in China back in the last full season of the show. His solution to the problem is disgusting even for South Park. Until about five minutes into this one, I had high hopes. Remember when South Park was about the kids? Yeah, I don’t think Stone and Parker can remember that far back either. Maybe they’ve been sampling too many “specials” from Tegridy Farms.

The Vaccination Special: We jump about a year, and now the story is about the vaccinations. People are lining up at Walgreens, which now has a bouncer like a hot night club. This was obviously back when there were limits on who could get the first shots. The kids are back to school, albeit socially distanced. When Cartman plays a dirty trick on the teacher, she quits, and the now defunded cops take over the teacher positions. It’s actually a clever plot dealing with the two big issues of the last two years. Of course, Token gets killed by the cops, and now even Cartman wants to win back the old teacher. The boys conspire to get vaccination doses for the teachers so they’ll come back, but it’s a little too little too late. So who is going to teach the kids now? Welcome back, Mr. Garrison. This is the far superior episode of the two and gives me hope South Park‘s actual return might be on the way.

Readers of this site know that I have a great fondness for the show. I love the entire non-political-correctness of it all. They cut all sides of the issues, and that continues here. I’m a little afraid the boys just aren’t hungry any more and might not even really want to keep doing this. I hope maybe if they go back to those things that made it all work from the beginning, it’ll be a big kick in the pants for the guys and bring back some of that clever stuff we all remember. The focus has to go back to the kids. I think they’ve beaten this dead horse of Randy’s pot business to such a point the stench is going to drive me away before long. There’s plenty of good material out there, guys. Let’s get back to work and bring South Park back again. I long to hear Parker and Stone proclaim: “Boys, we’re back in business.”

Gino Sassani is a member of the Southeastern Film Critic's Association (SEFCA). He is a film and television critic based in Tampa, Florida. He's also the Senior Editor here at Upcomingdiscs. Gino started reviewing films in the early 1990's as a segment of his local television show Focus. He's an award-winning recording artist for Omega Records. Gino is currently working on his 8th album Merchants & Mercenaries. Gino took over Upcomingdiscs Dec 1, 2008. He works out of a home theater he calls The Reel World. Favorite films: The Godfather, The Godfather Part II, The Body Snatcher (Val Lewton film with Karloff and Lugosi, not the pod people film), Unforgiven, Gladiator, The Lion King, Jaws, Son Of Frankenstein, The Good, The Bad And The Ugly, and Monsters, Inc.
Belle Collector’s Edition (UHD Blu-ray) (4K) NCIS: Los Angeles: The Thirteenth Season