Posted in: Disc Reviews by Jeremy Butler on September 28th, 2022 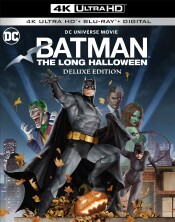 Of the DC animated movies, I’d rate this one as quite possibly my favorite of them all. Now when you consider that there are around 47 films created with another five films planned, that is quite the accomplishment. When it comes to Batman: The Long Halloween, the element that I really enjoyed is the mystery portion of it. It felt more like a detective story than a superhero movie. This was also the element that I most enjoyed about the Matt Reeves helmed live action film, The Batman. Not surprising that I identified with this aspect, as the 13-issue limited series that this film was adapted from was also one of the inspirations for the Reeves film. This animated film, like the comic it is adapted from, is centered on Batman efforts to identify and stop a serial killer known as Holiday. Holiday appears to be engaged in a war against the Falcone and Maroni organized crime families. Notably, the film also ties into the events that transform Harvey Dent into Batman’s enemy, Two-Face. Contributing to the success of this adaptation, would be the top-notch cast of voice actors, some repeats from another animated films and a couple of fresh faces. Jenson Ackles, who was last voiced Jason Todd for the Under the Red Hood animated film, upgraded to voice Bruce Wayne this time around. Batman staple Alastair Duncan, who has voiced Alfred Pennyworth in at least four other Batman properties, returns to voice the character for a fifth time. Then there is Troy Baker, who has voiced multiple Batman characters to include the bat himself, as well as multiple members of the Dark Knight’s rogue’s gallery across film, television, animation, and video game installments. This outing, he lends his talents to voice the Joker. Rounding the cast are fresh faces: Josh Duhamel as Harvey Kent/Two-Face, Billy Burke as Commissioner James Gordon, Titus Welliver as Carmine Falcone, and most notable the late Naya Rivera as Selina Kyle/Catwoman.

Set during the early days of Batman’s crime fighting career, The Long Halloween tells the story of a mysterious killer named Holiday, who murders people on holidays, one each month. Teaming with District Attorney Harvey Dent and Captain James Gordon, Batman races against the calendar as he tries to discover who Holiday is before he claims his next victim each month; all while attempting to prevent a crime war between two of Gotham City’s most powerful families, Maroni and Falcone. As previously mentioned, the film also serves as the vehicle to showcase Dent’s dark turn and transformation into iconic villain, Two-Face. To the adaption credit, it remains predominantly faithful to its source material, in most cases depicting certain storylines verbatim, such as the Holiday killings and Poison Ivy’s actions. There are occasions where the story deviates, such as with the twists regarding the killer’s motivations. However, the film ultimately respects the crucial elements of the comic, which I greatly appreciated.

There were some details that weren’t removed or revised from the comic that I would’ve liked to have seen in this incarnation, such as the subplot involving the Riddler and a twist involving one of Holiday’s victims. The removal of this themes aren’t detrimental to the overall story quality, but they could have potentially enhanced the story in my opinion, as well as fed into potential sequel film, as they do for the Batman: Dark Victory limited comic series. Just seems like a missed opportunity, if you ask me.

One of the most intriguing characters, despite him being used in a limited capacity, was Julian Day, also known as Calendar Man, voiced by The Suicide Squad breakout David Dastmalchian. Prior to this, I was not very familiar with this Batman villain. He clearly is not put on the pedestal of rogue’s gallery characters such as the Joker, the Riddler, and the Penguin, but the fact that Batman and Gordon opted to consult with this character when trying to determine Holiday’s identity was very telling. The portrayal has shades of Hanibal Lector, as he clearly knows who the killer is and keeps this information to himself, choosing only to taunt the heroes with cryptic clues. This was a character I wouldn’t have minded seeing more of.

Batman: The Long Halloween is presented in its original aspect ratio of 1.78:1. The ultra-high-definition image presentation is arrived at with an HEVC codec at an average of 40 mbps. Color isn’t going to be the major asset here. The style of the image is often very monochromatic. There’s little contrast and very rare splashes of color. When they come, they are vivid and bright, made more so by the intentional drabness of the film itself. Lines are bold and clean, and black levels do deliver the atmosphere of the style as it was intended. The source is 2K with a 2K intermediate, so this is pretty much an upscale to UHD. I’m not sure there was any serious recreation work here, as there are a few compression issues that were obviously part of the original work to create the HD version. So really all you get here is an upconvert with not much increase in bitrate and the HDR-10 allowing for some extra pop. It’s a double-feature in reality, and the disc remains a more standard 66GB dual-layer disc with an extra half hour to repeat the one feature which was not upgraded, so not really a bonus. The presentation would have been better served on a 100GB disc without the redundant extra.

The DTS-HD 5.1 audio presentation appears identical to the Blu-ray version. That works fine, because this was never really a dynamic audio presentation to begin with. It’s there to serve the dialog with little in the way of aggressive surrounds or room-shaking subs. It all fits the rather intimate atmosphere of the film and won’t be a distraction, although a Dolby Atmos version would have been a nice touch.

The extras are found on the Blu-ray copy of the film with the exception of:

Batman: The Long Halloween – “Evolution of Evil” (24:56): This had shades of a psychology seminar. In this featurette, clinical professionals and members of the production crew detail the motivations and dynamics between each of the characters. Though it can get a bit clinical at times, I found it to be very insightful, albeit a bit long. (also on the 4K)

From the DC Vault: Batman the Animated Series: Fans of the original animated series will be pleased, as this discs features four full-length episodes straight from the DC Vault. In keeping with this film being the transformation of Harvey Dent, episodes “Two Face” Part 1&2 are included, as well as “Christmas with The Joker” and “It’s Never Too Late.” Of the featured episodes, I encourage watching the Two Face episodes.

Preview of Batman: Trailers for animated Batman films, “The Dark Knight Returns Part 1 & 2” “Gotham by Gaslight” and “Batman: Hush.” Interesting, but nothing you couldn’t find on YouTube.

Once again, I repeat that The Long Halloween is quite possibly my favorite of the DC animated movies. Naturally, this position is threated by Justice League: The Flashpoint Paradox, Justice League Dark: Apokolips War, and Batman: Hush, just to give you a baseline regarding my preferences. For me, The Long Halloween showcases Batman’s talents as the World’s Greatest Detective more than his attributes as a crimefighter, which is what I care most about. It’s a mystery that doesn’t disappoint, especially when Holiday is revealed and the motivation for the killing spree is revealed. In fact, you may find yourself questioning whether justice was truly served.

Jeremy Butler is a film school graduate of the International Academy of Design and Technology. He is been writing for Upcomingdiscs since 2012; however, movies have played a big part of his life for much longer. Favorite genres include horror, science fiction/fantasy, and comedy. Favorite movies are V for Vendetta, Boondocks Saints, Kiss Kiss Bang Bang, and The Godfather.
Seal Team: Season Five Elvis (2022) (UHD Blu-ray) (4K)