Posted in: The Reel World by Brent Lorentson on October 5th, 2022 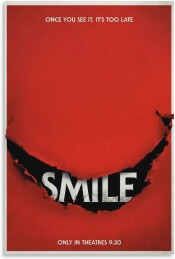 I’m lucky; I got to see the premiere of Smile in perhaps the best environment possible to experience a genre film. By this I mean I saw it at its premiere as the opening night film of Fantastic Fest in Austin, Texas at The Alamo Drafthouse. It’s important I state this, because it reflects the amount of excitement that I had going into this film, not just for the film but for the festival as well. I’d be seeing this film with about 180 plus film fans who are ravenous for genre films from around the globe who are definitely more than just casual filmgoers. Still I went into this film knowing as little as possible. I believe I had only seen one trailer for the film, which was the night before; it was attached to Barbarian. (Seriously, you need to see Barbarian on the big screen and with a crowd, it was a friggin blast to experience.) What I remember from the trailer was intriguing, and it certainly showed promise, though I feel the marketing tactics they did by placing actors in baseball stadiums to leer at the players with creepy smiles was some of the most brilliant marketing for a film in years. With all that said, is it a good film?

Dr. Rose Cotter (Sosie Bacon) is overworked at the hospital she works at, spending most of her time attending to her mentally ill patients, so much so that even when she is told to leave she forces herself to make time for one more patient. As it would turn out, it would be a regrettable decision. Rose meets with the new patient, a PhD student who claims there is something trying to kill her, something only she can see, and its one defining characteristic is that it has a grotesque smile. The patient suddenly changes from her panicked state and has a hideous smile of her own as she begins to mutilate herself in front of Cotter and eventually dies. The sequence is creepy and effective and has the kind of vibes that reminded me of The Ring, The Grudge, and It Follows, so I felt like I was in good hands, expecting a fun story with a few jump scares thrown in for good measure.

Sadly, like the movies I listed above, Smile follows their formula a bit too well, and despite having potential and even having a handful of cool jump scares, this film is just pretty much the same ride as those films, though with a lackluster third act. When I say this film follows the same formula, I mean it has Rose experiencing things that only she can see, and when she goes to her family and friends of course no one believes her, and they all just think she’s overworked and simply driving herself mad. The film does attempt to make this “entity” a bit of a metaphor for trauma and PTSD, and it works on a very basic level.

The relationships in Rose’s life could have elevated the film more, though. The relationship with her fiancée, Trevor (Jessie T, Usher) falls flat because of the zero amount of chemistry between the two, though it seems to be written that way. If that’s the case, the character should have just been removed altogether and more attention put on her ex-boyfriend, Joel (Kyle Gallner), who is a detective that she goes to for help in finding out what is happening to her. Then there is the relationship with her sister. Holly (Gillian Zinzer) does offer some depth to Rose’s character. In these scenes we get to know about some past trauma in Rose’s life, but sadly this relationship isn’t utilized to do anything more than offer up some backstory.

OK, so it may seem like I’m being a bit hard on this film when really all it is meant to be is a popcorn thrill ride with a few jump scares. I just want to make it clear that really that’s all that Smile is, when sadly it had some potential to be something more.  To its credit, it does have some pretty creepy scenes, and, well, the birthday party scene is one I enjoyed quite a bit. But for those hardcore horror fans, this one is going to be a bit forgettable, though I feel because of this being October and people wanting to get into the Halloween spirit, this will do well with the casual filmgoers.

Brent Lorentson is a horror writer and film critic based out of Tampa, Florida. With a BA in Digital Film, he co-wrote and co-directed Scavenger Hunt. His short stories have appeared in various horror anthologies. In 2019 his short script Fertile Blood will be a part of the anthology horror film Slumber Party. He is currently working on his first novel A Dark and Secret Place set to be released in late 2019. Favorite Films: Taxi Driver, Fight Club, I Saw the Devil, The Wild Bunch, Dawn of the Dead, A Clockwork Orange, Pulp Fiction, Heathers, The Monster Squad, and High Fidelity.
The Octagon (Blu-Ray) Don’t Tell Her It’s Me (Blu-ray)