Posted in: Disc Reviews by Michael Durr on October 3rd, 2022 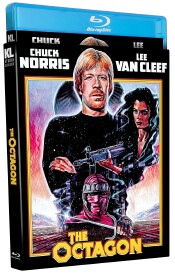 In truth, I have never been a “Chuck Norris” type guy.  I can get down with many martial artists as previously explained, from Van Damme to Seagal  to Jeff Speakman and probably many others in between.  Except when it came to the Texas Ranger.  Sure, he was an amazing martial artist, but he never had the ability to draw me in, the charisma that could keep me interested when his punches and kicks could not. (But yet I liked Jeff Speakman; go figure.)  Anyhow, I think after all this time I finally found the film that could change that.  Enter The Octagon.

The sun sets (or is it the sun rises? I’m not sure exactly).  We are treated to a giant Chuck Norris head (I mean his character, Scott James) bathed in red light.  He asks us questions such as, “Does Anyone Really Know?” and “Why Did You Do It?” in a husky whisper.  The credits are rolling.

We see a large vehicle stop and two men dressed in guerilla type outfits get out.  They go to the back of the vehicle and let out a bunch of tough-looking people.  The leader of this group is ticked off because they were dropped off two kilometers short of the actual camp.  But the two guerillas tell the group to start walking.  As the group gets closer to the camp, we see ninjas in the trees.  Once they get to the camp, the audience realizes that this is a training ground to form men and women into hardened fighting machines (or if you prefer, ninjas).  Of particular interest are the two people who appear to be in charge, Master Isawa (played by John Fujioka) and Seikura (played by Tadashi Yamashita).

Meanwhile, a Canadian diplomat is assassinated in Paris by terrorists masquerading as a family with a baby stroller.

Scott James and A.J. (played by Art Hindle) clap for a dance performance as it ends.  The two friends talk about the lead dancer, Nancy (played by Kim Lankford).  After A.J. tends to his date, Scott decides to talk to Nancy.  They walk together and see the newspaper article about the Canadian diplomat.  Nancy curiously asks if an American did it.  They talk and share dinner.  Then they decide to go back to her family’s house and invite Scott in for a nightcap.

They walk inside the darkened house, and a whisper goes off inside Scott’s head.  They are here.  Attacks come out of the shadows.  Scott goes into action and defends against the ninjas.  Unfortunately, in the process Nancy gets knifed and dies.  Scott finally finishes off the ninjas and then hits the lights to see the carnage of bodies which includes Nancy’s family and of course Nancy herself.  Scott has to do something, and he needs help.  He decides to seek out the anti-terrorist known as McCarn (played by Lee Van Cleef) and see if he can even the playing field and take on his brother, Seikura.

From the outset and, well, the appearance of a giant floating head, I knew that this Chuck Norris was something different.  It does not follow what I would call a prototypical Norris movie where he is doing something very honorable and he’s seen as this big figure of justice and discipline.  Nor is he a family man, standing up for those wholesome values.  First of all, he’s got three leading ladies in Nancy, Justine (played by Karen Carlson), and Aura (played by Carol Bagdasarian).  It’s very James Bond-Like and paints Chuck in the dashing lead man type persona.  Aura is perhaps the most interesting of the three leading ladies and actually puts on the most underrated performance of the film.

In addition to the change in character for Chuck, we also get a wonderful supporting cast.  I’ve already mentioned the ladies, but we also get Lee Van Cleef and Art Hindle, who both do a dynamic job in each of their parts.  My only miss was that I wanted the relationship between Scott and AJ’s character to be more of a Batman and Robin scenario, and by that I mean to have AJ be someone who is being trained by Scott and eager to bust out of his shadow.  The scenario is there in pieces; it’s just that AJ’s character seems to be almost bungling in a way.  At least show him to have some skills before he is overmatched.  Sell me he’s not just a hothead (add more sympathy).

The movie on the whole is just a little goofy if you consider the whole modern day ninjas aspect or Scott/Chuck’s constant whispering.  It’s a double-edged sword (pardon the pun) of the one thing that sets it apart also being the same thing that will have most traditional Chuck Norris fans kinda ignore this film.  But it’s the same reason why I really like it.  The storytelling, how different it is, and honestly good character development make it something that I want to re-watch again and again.

This movie is presented in a 1.85:1 widescreen format.  This is a nice restoration from the Kino folks.  For those who are not aware, it was filmed primarily in Los Angeles with a little bit in Mexico as well.  Overall, it has a good warm, earthy type of feel, and while there is grain, it feels natural and has the looks of a 1980 film.  Sure, there could have been some extra work thrown in, but unless you get up close, you aren’t going to think it’s a hassle.  There are some dark scenes in here as one would guess, but I never felt that I was having trouble with seeing the action.

The sound to this film is presented in DTS HD 2.0 Master Audio in English with English subtitles.  The audio honestly suffered a bit.  The good parts: action bits are well represented and a kick or a punch never feels weak in the sound department.  Music comes in loud where applicable.  Dialog could use some clarity work, as it felt stilted or hollow.  I think I made out all of the words all right, but certain scenes did not seem to have that oomph and may have faded into the background for me.  It’s far from bad; I just felt that among all of the areas on the disc, audio probably fared the worst.

Commentary with Brandon Bentley and Mike Leeder : These guys are billed as action film historians.   As one would hope they blend commentary about the actual film with the genre and other martial arts films that share and don’t share common themes with The Octagon.   One of the more interesting topics was the discussion of how the UK cuts their films.  It’s pretty entertaining, and the two are really having a good time, which contributes to a very enjoyable commentary.

Commentary with Director Eric Karson :  This very much screams the term “scene specific commentary”.  Eric often describes the action as it’s happening, which seems sometimes tedious.  He also talks about motivations and how they shot certain scenes.  Plenty of good bits in this commentary as well from the technical end.  The only part that I didn’t care for too much was the attack on film reviewers (he uses the old tired comment of comparing them to people who lives in their mom’s basement with an axe to grind).  Suffice to say, if you want everything about this film, you will find it in the two commentaries or the “making of” featurette.

The Making of The Octagon 39:27: While there are about half a dozen cast and crew members who talk on this 2003 legacy feature, it’s primarily led by Eric Karson, the director, and Jean Higgins, head of production. They go over a lot of topics in their time including how they found the screenplay (written by Leigh Chapman) and the use of the Echoplex (the whisper technique).  They also go over the usual movie type stuff including the cast members, score, locations of shooting, and stunts.  We also spend a lot of time with Richard Norton, who had a lot of roles including the mysterious Kyo and did a lot of the stunt work even when his characters weren’t on the screen.

Theatrical Trailer, Tv Spots, and Radio Spots for The Octagon:  There is also a TV spot for Force of One and The Octagon (double the Chuck Norris, if you will).  In addition, there are trailers for A Force of One, Good Guys Wear Black, An Eye for an Eye, Code of Silence, Hero and the Terror, and Death Rides a Horse.

I was offered to review any or all of three Chuck Norris films.  Good Guys Wear Black, A Force of One and The Octagon, the first two of which, Brent Lorentson has done a fine job of reviewing.  But I had to pick the strangest one out of the bunch, and I certainly got what I asked for in this film.  It’s quirky; it’s so not Chuck Norris, but is at the same time, and it has ninjas.  It’s satisfying, fun to watch, and most of all has a good plot, which was quite unexpected.  We can kinda figure out how it’s going to play out, but half the fun is getting our bang for the buck in the process.

The disc is a fine effort by the Kino team.  Its highlight is the special features, where we get two very different (but interesting) commentaries and a wonderful featurette that goes far beyond pedestrian making-of extras.  Of course, I selfishly wanted Chuck’s involvement in the extras, but we all know that wasn’t going to happen.  I guess this is the part where I make a bad Chuck Norris joke.  Let’s see … oh here is one … Chuck’s periodic table has only one element, and it’s the element of surprise.  All right, with that out of the way, I give this one a very lethal recommendation.   You’ll be pleasantly surprised that this film stays interesting until the final encounter.  Enjoy.

Michael Durr has been reviewing movies for the better part of fifteen years now. He primarily enjoys thrillers, sci-fi, animation and even a little courtroom drama. His favorite films include Escape from New York, the Goonies and anything with Alyssa Milano. When he’s not praising Kurt Russell as the greatest actor of our time or scratching his head over a David Lynch flick, he’s spending time at home in Texas with his lovely wife, Lori and his amazing son. How they put up with him is a mystery, but even Basil Rathbone doesn’t have the time to solve that one.
Catch the Heat (Blu-Ray) Smile