Posted in: No Huddle by Jeremy Butler on October 7th, 2022 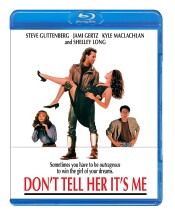 Not crazy about the title. Personally, I think that the title of the novel on which this film is based  would have been better suited given the film’s plot. Based on a 1989 Sara Bird novel by the name of The Boyfriend School, this 1990 comedy tells to story of Gus Kubicek, a depressed and overweight cartoonist who is in love with a woman that won’t seem to give him the time of day. I’ve heard some excuses for getting out of having to go out with someone, but lying and saying you have to have dental surgery; that’s pretty low. Despite seeing numerous movies that utilize the “judging a book by its cover” trope, I still was able to see the appeal of the film, as soon as I was able to put myself into the mindset of the film’s time period. By doing this, I was able to avoid perceptions of it being cliché. This was a necessary measure to take, especially if you would like to be able to enjoy the film in 2022. Even so, I’m still not a big fan of the title.

Steve Guttenburg stars as Gus, who spends his days longing for Jami Gertz’s Emily Pear, a beautiful yet shallow young woman, who in no way sees him as a possible romantic partner. Gus’s caring and nosy sister, Lizzie (played by Shelley Long) endeavors to transform him into someone who would capture Emily’s attention. Using her knowledge as a romance novelist, Lizzie gives Gus a full education in qualities that attract women (i.e. The Boyfriend School). And thus, Lobo Marunga, a leather-clad biker from New Zealand, is born.

As expected, Emily eventually falls for Gus, and while he is initially pleased, he soon becomes conflicted given that Emily’s feelings for him are based on a lie. This portion of the film was the most entertaining for me. A fine line has to be maintained between one’s desires and their conscience, and it was good to see that Guttenburg walked this line moderately well. Granted, some of his choices were self-serving, but put into his shoes, I can’t strictly say that I would have done differently.

Going back to the “judging a book by its cover”, this is the principle context of the film, as the Emily character only becomes interested in Gus after his transformation. This keeps Emily from being perceived as an innocent victim in my eyes, as it shows her to initially only be interested in the superficial. Not passing judgement, but as they say, beauty is only skin deep. Fortunately, there is a bit of a redemption arc for the character when she is forced to confront her own biases.

An interesting tidbit about the film: Sarah Bird, the author of the novel that the film is based on also penned the screenplay. While I cannot say with certainty what liberties were taken while adapting the novel, I do feel comfortable saying that having the original writer in charge of the screenplay likely ensured that the spirit of the novel made it onto the silver screen.

My reservations about the film’s title aside, I did enjoy the film. It was lighthearted and funny at times, even though I didn’t follow all the references. I wouldn’t have thought that Guttenburg could play a convincing bad-boy type character, but when you consider that he was actually playing a nerd only pretending to be a bad boy, it makes his performance all the more convincing. It’s not a movie that I would immediately feel a need to re-watch, but if my wife and I were looking for easy viewing pleasure on a quiet night at home, I’d have no issue with dusting this bad boy off for the occasion.

Jeremy Butler is a film school graduate of the International Academy of Design and Technology. He is been writing for Upcomingdiscs since 2012; however, movies have played a big part of his life for much longer. Favorite genres include horror, science fiction/fantasy, and comedy. Favorite movies are V for Vendetta, Boondocks Saints, Kiss Kiss Bang Bang, and The Godfather.
Smile Paramount Presents: War of the Worlds (1953) and When Worlds Collide (UHD Blu-ray) (4K)