Paramount Presents: War of the Worlds (1953) and When Worlds Collide (UHD Blu-ray) (4K)

Posted in: Disc Reviews by Gino Sassani on October 7th, 2022 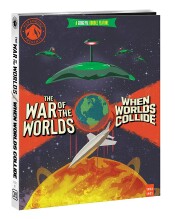 “No one would have believed in the middle of the 20th century that human affairs were being watched keenly and closely by intelligences greater than man’s. Yet, across the gulf of space on the planet Mars, intellects vast and cool and unsympathetic regarded our Earth with envious eyes, and slowly and surely joined their plans against us. Mars is more than 140 million miles from the sun, and for centuries has been in the last status of exhaustion. At night, temperatures drop far below zero even at its equator. Inhabitants of this dying planet looked across space with instruments and intelligences that which we have scarcely dreamed, searching for another world to which they could migrate.”

War Of The Worlds is perhaps one of the most iconic and often infamous science fiction works in literature history. The book by H.G. Wells was published in 1889 but would not see a feature film version for quite some time. Cecil B. DeMille worked with Paramount to obtain the rights from Wells in the mid 1920’s. He appeared to appeal to Wells himself, who was a fan of DeMille’s work, and the rights were purchased. But the film fell on hard times. On Halloween in 1938 Orson Welles, no relation, produced his famous radio drama of the story. While there were stories of people killing themselves because they believed it was a real radio broadcast of a Martian invasion, most of those stories are myth. It did cause panic, but only because folks ignored the many times the show announced that it was a radio drama. But interest spiked to do the long-dormant film. DeMille approached Welles to do the film, believing that the hysterics from the radio broadcast would make him a natural for the film. When Welles refused, he turned to Alfred Hitchcock, who also turned down the property. Finally George Pal agreed to do the film in the 1950’s but soon ran into trouble. You see, the rights were obtained so long ago that they were exclusively for a silent film. The estate of the author was so pleased with Pal as the choice to produce that they fixed the details, and the film was finally released in 1953. It has become a classic in the decades that followed.

When a strange “meteor” strikes the wilderness near a small California town, it brings out curiosity seekers for miles around. One of those seekers is Professor Clayton Forrester, played by Gene Berry. His thoughts are that it isn’t a meteor at all. He happened to be fishing nearby when he saw it come down. The object is both radioactive and hot, and the Professor decides to stick around until it cools, believing it warrants further investigation. He doesn’t really get the chance. Later that night a part of the object begins to unscrew like the top of a jar. A serpentine object peeks out with a small head. When the locals assigned to stand watch attempt to approach it with a white flag, they are incinerated by the blast of a horrible death ray. Before long these ships are falling all over the world, and flying machines shaped like a batwing with the serpent neck and heads using these weapons as they march through their assigned territories. It’s an invasion from Mars, and Forrester is looking for a way to stop them. Unfortunately, panic rides the streets, and his truck with the instruments and materials he might need are hijacked and he’s abandoned to a deserted city where the few remaining souls gather in a church to pray. Suddenly, in the midst of the destruction, their prayers are answered, and the machines begin to crash all over the world, destroyed not by human weapons, but by the planet’s smallest of organisms.

While George Pal brought many of his trademark elements to the film, there is plenty of evidence that DeMille had his hands in the pie. It was DeMille who recommended the use of Sir Cedric Hardwicke as the film’s authorities narrator. George Pal actually wanted DeMille to do the narration, but he DeMille offered Hardwicke ,who was about to star in his biblical epic The 10 Commandments. You can see some foreshadowing of that epic in several exodus scenes in the path of the Martian machines. There are many such wonderfully atmospheric moments in the film. One of my favorites was a dog scavenging in the wake of the panic. How much of this was George Pal and how much was DeMille or the film’s director Byran Haskin is hard to know. Haskin is always overshadowed by his iconic producers but has a pretty solid resume of his own that includes Robinson Crusoe On Mars, Treasure Island, and From The Earth To The Moon. The contributions have melded together, but the result is a film that holds up today and is a far superior work to the Steven Spielberg/Tom Cruise effort.

The impact of the film is as huge as the crater caused by the crashing Martian ships. The sound effects were groundbreaking and are still used in the industry today. One of the weapons would go on to be used as photon torpedoes on Star Trek, and the snake-like electronic rattle shows up in tons of films and television shows. Ann Robinson plays Forrester’s love interest, Sylvia Van Buren. Robinson is still with us today as the only surviving cast member. She has appeared in reprisal of the role in a couple of films and in the 1980’s television series War Of The Worlds, which was a sequel to this particular film. She was the connecting thread and appeared in several episodes as Dr. Sylvia Van Buren. MST3000 fans will like to know that the show’s frequent villain Dr. Forrester is taken from the film.

As a kind of extra you also get another George Pal film: When Worlds Collide. This film is not offered in 4K and can be found on a bonus Blu-ray of that particular film.

“Needles in a heavenly haystack. There are more stars in the heavens than there are human beings on Earth. Through telescopes men of science constantly search the infinitesimal corners of our solar system seeking new discoveries, hoping to better understand the laws of the universe. Observatories dedicated to the study of astronomy are set in high and remote places, but there is none more remote than Mt. Kenna Observatory in this part of South Africa.”

That’s where a horrible discovery is made. The scientists there have been tracking two objects in space hurtling toward a collision with Earth. There is a planet they named Zyra and its sun Bellus. They decide to send their calculations to New York where the famous Dr. Hendron (Keating) will double check. The delivery is made by pilot/messenger man David Randall (Derr). He pretends to know what it’s about when the lovely professor’s daughter Joyce (Rush) brings up some information. She’s engaged to be married to Dr. Tony Drake (Hanson), but she ends up falling for the pilot. When the facts are checked, there can be no doubt. Earth will be destroyed by the star Bellus in about eight months. The nation’s government laughs at the proposition, and so using private funds the group begin to build a rocket that will take 40 lucky passengers to the planet Zyra where they hope to survive.

With hours to go, a lottery is held to pick the survivors, and of course, there’s violence from the people forced to stay behind. The ship barely escapes and reaches Zyra. There is a sequel to the Phillip Wylie novel, but it was never filmed. Pal suffered a few box office failures, and the project was dropped.

This is another film where Cecil B. DeMille acquired the rights yeas ago, this time in the 1930’s. Steven Spielberg also planned to remake this film, and a script was written which would go on to be adapted as Deep Impact for another director.

War Of The Worlds is presented in its original aspect ratio of 1.37:1. The ultra-high-definition image presentation is arrived at with an HEVC codec at an average of 50 mbps. The film was shot on 35mm, so is native 4K. There has also been extensive restoration here, and it shows. The HDR enhancement is the most obvious contribution. It starts during the prologue when there is a matte of Mars against a black of space surrounded by colorful pinpoints of stars. The contrast and flawless execution here is stunning from a film so old. There is still an element of grain, and colors are dominated by the film stock of the day. There is a new brightness to the animated weapons and detail I never noticed before even though I have seen this film dozens of times. This looks rather wonderful, and I expect you to be impressed.

The DTS-HD 5.1 audio presentation is more than a little modernized. Obviously, this was originally presented in mono. I don’t think they got carried away by the surrounds, and I found very little interference there. The additional speakers add more atmosphere and a certain fullness. This is still a film dominated by dialog which is perfectly preserved and the sounds of destruction which now have a rather dynamic push from the subs. I’d call it a little bit like the best of both worlds.

The extras are only the features found on the old Blu-ray release. No new features, but I do consider the addition of When Worlds Collide an exceptional bonus feature.

Of course Spielberg’s War Of The Worlds “looks” better. That’s what happens when you have tons of money and 2005 technology. Let’s not forget how groundbreaking this all was in 1953. There’s no doubt that science fiction films, including those by Spielberg, owe a lot to the path George Pal blazed in the 1950’s. This was a B film with very little studio support. Still, with very little money and strong original material, War Of The Worlds stands tall as a pioneer in science fiction filmmaking. “Extra! Extra! Read all about it. End of the world just around the corner. Extra!”

Gino Sassani is a member of the Southeastern Film Critic's Association (SEFCA). He is a film and television critic based in Tampa, Florida. He's also the Senior Editor here at Upcomingdiscs. Gino started reviewing films in the early 1990's as a segment of his local television show Focus. He's an award-winning recording artist for Omega Records. Gino is currently working on his 8th album Merchants & Mercenaries. Gino took over Upcomingdiscs Dec 1, 2008. He works out of a home theater he calls The Reel World. Favorite films: The Godfather, The Godfather Part II, The Body Snatcher (Val Lewton film with Karloff and Lugosi, not the pod people film), Unforgiven, Gladiator, The Lion King, Jaws, Son Of Frankenstein, The Good, The Bad And The Ugly, and Monsters, Inc.
Don’t Tell Her It’s Me (Blu-ray) Amsterdam