Posted in: The Reel World by Brent Lorentson on October 10th, 2022 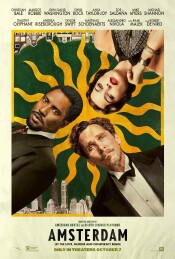 It’s that time of year again, when studios begin to release the award contending films. Considering how lackluster the summer release slate was, when I look at the release schedule, these next couple months are pretty stacked with films for film lovers to get excited about and hopefully give them a reason to return to the cinemas. This week the film I’m talking about is Amsterdam. You look at the star-studded cast, you see the writer and director, David O. Russell (American Hustle, Silver Linings Playbook, The Fighter) and you wouldn’t be wrong to think that this is going to be a big film. I’ve been a fan of David O. Russell since he did Three Kings, and any time he has a movie come out, it’s something I get excited about. Sadly, this is one of those films that just seem to be too ambitious for their own good. I’ll say this; if it wasn’t for the amount of talent on screen, I don’t think it would be as good as it is.

It’s 1933. Burt Berendsen (Christian Bale) and Harold Woodman (John David Washington) are best friends ever since serving in WWI together, each saving the other’s life. Berendsen is now a doctor who specializes in treating disfigured vets while concocting his own pain medicines. Woodman has gone on to establish himself as a successful lawyer. The pair have been hired by Liz Meekins (Taylor Swift) to find out if her father, Burt and Harold’s commander in the war, has been murdered.  As it turns out, he has been murdered, and in the process of disclosing this to Meekins she is murdered, and Burt and Harold are fingered for the crime. This kicks off the adventure of these two where they are forced to clear their names and uncover the truth behind their former commander’s murder. If things were kept this simple the movie could have had more promise, but David O. Russell seems to get too clever for his own good, throwing in twists and hijinks that seem to come out of nowhere, overcomplicating the plot to absurdity.

When the film flashes back to 1918 where we see Burt and Harold meet in the war and get injured which is where Valerie (Margot Robbie) is introduced as a nurse that treats them both, she also has a strange quirk of collecting bullets and shrapnel from her wounded patients and turning it into pieces of art. The three end up forming a unique bond while staying in Amsterdam. The time the film spends with these three as they forge their friendship is honestly some of the more engaging moments in the film. There is a nice chemistry that works between the three, and it really gave me hope for how the film would develop, but as Valerie warns that nothing good will come if Burt or any of them leaves Amsterdam, as it turns out it would hold true for the rest of the film.

There are a lot of fun and unique pairings in the film. Anya Taylor-Joy and Rami Malek play husband and wife and “help” in their own way getting Burt and Harold on the right track of finding who may be responsible for the commander’s death. Michael Shannon and Mike Myers work together as a pair of “spies”. Then there are Alessandro Nivola and Mattias Schoenaerts, who play a pair of squabbling detectives. Once you add in Robert DeNiro, Zoe Saldana, a barely recognizable Timothy Olyphant, and Chris Rock, you have to wonder just how this film could ever feel frustrating to watch. The performances by everyone are great, and when you view the scenes on their own, they work and are fun, but it’s how they are put together that is just such a sloppy mess. which is so unfortunate.

The makeup, set design, and costuming all look great, and perhaps come awards time the film will get some recognition, but I’m afraid with the titles coming out in the next few months this film will be forgotten. Despite borrowing some story points from American Hustle as well as attempting to bring the history from the past and attempting to show how it could resemble today’s politics through a certain filter, all that is lost because of simply having sloppy storytelling.

Brent Lorentson is a horror writer and film critic based out of Tampa, Florida. With a BA in Digital Film, he co-wrote and co-directed Scavenger Hunt. His short stories have appeared in various horror anthologies. In 2019 his short script Fertile Blood will be a part of the anthology horror film Slumber Party. He is currently working on his first novel A Dark and Secret Place set to be released in late 2019. Favorite Films: Taxi Driver, Fight Club, I Saw the Devil, The Wild Bunch, Dawn of the Dead, A Clockwork Orange, Pulp Fiction, Heathers, The Monster Squad, and High Fidelity.
Paramount Presents: War of the Worlds (1953) and When Worlds Collide (UHD Blu-ray) (4K) Lyle, Lyle, Crocodile