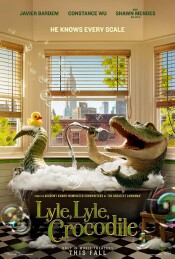 In 1907 in a little town named Kearny, NJ (just a stone’s throw from New York City), a worker was cleaning out a sewer gutter. Little did he know he would be soon bit by a eighteen-inch alligator. Stories would crop up around the New York area of alligators coming up from beneath the city every few years or so. It became urban myth, comic books, heck, it ended up a movie named Alligator (which I believe has a 4K as of this year) and a children’s book.  It’s a popular story idea.  Well,  my family recently decided to go see Lyle, Lyle, Crocodile over the past weekend, which gives us a dancing and singing crocodile, and all I kept thinking was perhaps this movie would have worked better in a sewer.  Hey, it worked for the Teenage Mutant Ninja Turtles. Let’s take a look.

Hector P. Valenti (played by Javier Bardem) is a showman.  He wears a cape, a top hat, and can call up a cloud of blue smoke like nobody’s business.  He’s also something of a con man, and he will do anything to catch a break.  In our opening scene, he is able to find his way onto the popular show, Show Us What You Got (obvious ripoff of America’s Got Talent) again.  This time he has a pigeon act that’s sure to wow the audiences.  Except it doesn’t, and then he gets kicked out of the show and is told to never come back.

Hector goes down the road to Eddie’s Exotic Animals.  He needs an animal that he can win audiences over with and make him some money.  But nothing seems to fit the bill.  Then the showman hears singing coming from the backroom.  I guess Eddie did not mind too much, because Hector takes it upon himself to go investigate.  After going through several cages, he finds himself upon one where there is a crocodile that actually sings (sung by Shawn Mendes).  Naturally, he takes him home, and we start the singing-with-a-little-bit-of-dancing montage.

So Hector and the now named Lyle the Crocodile have been practicing for years in their brownstone until the showman feels that the reptile can perform in front of an audience.  In order to secure a stage show, Hector basically has to use their home as collateral and will rent it out in the event the show doesn’t get the customers.  Then on their fateful opening night, the worst possible thing occurs. Lyle has stage fright and won’t say a word.  People leave (I guess they aren’t impressed by the fact he can walk around on his hind feet), and the show is a failure.  Hector leaves to go on the road to make some cash, while Lyle has to stay in the attic at the brownstone.

Fast forward years later and the Primm family have moved into New York and taken the brownstone as their residence.  Mr. and Mrs. Primm (played by Scott McNairy and Constance Wu) and their son, Josh (played by Winslow Fegley) are excited and nervous about their new surroundings.  On the first night, Josh hears a sound in the attic, and he goes to investigate.  All he finds on this occasion is a crocodile in a glass case with a note.  But the anxiety that this kid has is not going away, and so when on the second night he hears singing in that same attic, he goes to investigate again.  That’s when Josh’s life changes forever.

As expected, Josh finds a crocodile, and we have our story: a family that figures out how to live with a rather large crocodile with focus on the bond between a boy and his reptile.  The movie tries its best to be charming and throw in a plethora of musical numbers to boot, naturally most led by Lyle (though we get an odd one with Mrs. Primm as well).   There are a few funny scenes, mostly involving Josh, Lyle, and the neighbor’s cat, Loretta as they sneak out at night to feast on the town’s leftover scraps.  Smartly, Hector comes back around the end of the second act and gives the movie some much needed momentum.

Unfortunately, we quickly learn that the movie is only interesting because of Hector’s character.  That’s primarily because the characters with the exception of Josh and Hector are extremely one-dimensional or barely used at all.  I honestly thought that the character of Kara Delany (played by Lyric Hurd), who develops a friendship with Josh, was going to be an interesting subplot.  Except they introduce it at the beginning and then forget about it until the end, where they do their best to speed it along for the sake of the final credits.

My guess is that the movie which comes in at nearly two hours was cut dramatically to make sure its intended audience doesn’t fall asleep.  These are obviously families who have been searching for a quality kids’ film since the last Minions movie.  Except it’s not really a family film.  It’s more of a musical with family elements and a PG rating, because nothing really bad happens, and most of the characters feel very tired in their presentation.  How the neighbor doesn’t get decked half an hour into the movie is completely beyond me.

This movie is very obviously trying to be a spiritual successor to Paddington.  But the main problem with that is that the film’s main character, Lyle, has none of the marmalade-eating bear’s charm.  For you see, the crocodile never actually talks and only sings … occasionally.  There is no quick wit; there aren’t even many scenes to develop an attraction to this crocodile.  He just sings in a nauseating high voice. Well, it is Shawn Mendes, after all.  I think that’s my real problem. I would like to spend a day with Paddington, and I don’t think I can make fifteen minutes with Lyle (unless perhaps he knows some Prince or Depeche Mode).

Lyle Lyle Crocodile ended up #2 on its first week, raking in a little over 11 million.  Unfortunately, it doesn’t look like it will last too long even in a market that is desperate for a decent kids’ film.  I think some audiences will enjoy the reptile musical, but unfortunately those who are looking for something with a little more substance will not find it.  After all, when the best character is the one that the film tries very badly to paint in a negative light and not your main attraction, you have a serious problem.  If you are curious about my family’s thoughts, my wife did say she liked it, and my son was wondering when we would get the disc or digital (because he is becoming a cinephile like me), so maybe it’s me.  So for those families, maybe you do want to see it and will have a good time.  Enjoy.

Michael Durr has been reviewing movies for the better part of fifteen years now. He primarily enjoys thrillers, sci-fi, animation and even a little courtroom drama. His favorite films include Escape from New York, the Goonies and anything with Alyssa Milano. When he’s not praising Kurt Russell as the greatest actor of our time or scratching his head over a David Lynch flick, he’s spending time at home in Texas with his lovely wife, Lori and his amazing son. How they put up with him is a mystery, but even Basil Rathbone doesn’t have the time to solve that one.
Amsterdam The Adventures of Ozzie and Harriet: Seasons 3-6