Posted in: Disc Reviews by Gino Sassani on October 12th, 2022 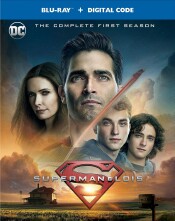 “There’s a bizarre version of Superman on the loose.”

They are the most famous couple in comic book history. Together they are Superman & Lois, and they’ve joined the ever-expanding Arrowverse for their second season now out on Blu-ray from Warner Home Entertainment. While this is still a young series, the characters and these actors portraying them are not new to the Arrowverse. Tyler Hoechlin as Superman and Elizabeth Tulloch as Lois Lane have been here for a few years. Both have shown up on Supergirl, and both appeared in a couple of the crossover events that have pulled together the various Arrowverse shows in the past. Now the focus is on them. They have their own show, and it’s quite a different approach to the characters and their story. There has also been a departure that puts the show no longer in the official Arrowverse. I suspect that move comes on the heels of The Flash now entering its final season and I suspect closing the Arrowverse going forward.

The second season picks up exactly where the second season ended. So if you don’t know these characters and the events of the first season, I suggest you go back and catch up before you read this review or attempt to watch this release. When the first season ended, a spacecraft of some kind was crashing down at the Kent farm. Inside we find Natalie (Buck). She’s the daughter of John Henry Irons (Parks), who was a crucial ally of our heroes in his steel suit back in the first season. He came from a different Earth where Superman was a bad guy and he was married to Lois, not Clark. That Lois was killed by Superman, and so Natalie’s first reaction is that this Lois is her mother. Of course, these feelings cause a lot of the season’s emotional tension as the families attempt to stay together. Turns out Natalie is very smart and pretty much the brains behind the steel suit. We will also learn much more about their old life as the season progresses.

For Superman, he’s having trouble with the new head of the DOD. That would be Mitch Anderson (Bohen). The previous head was General Sam Lane (Walsh), who was, of course Lois’s father. Anderson wants 100% loyalty and submission from Superman who insists on saving lives all over the world including a North Korean submarine and a Russian village. Anderson has developed a elite fighting team made up of teens on X-Kryptonite, which gives powers to normal people. Usually you get one of Superman’s powers, and it appears to be random. It might be flight, or x-ray vision, or super speed or strength. Supes isn’t happy about the new team and worries about using such young kids to fight huge threats.

As the season begins, Clark is having these debilitating visions, and we soon learn that it’s connected to a new arrival on this Earth. Meanwhile Lois has put her reputation on the line against a cult leader named Ally Allston (Kihlstedt). Lois’s sister Lucy (Dewan) is one of her followers, and it’s led to a fallout between the sisters. Lois wanted so much to expose Ally and show her sister what’s really going on that she crossed lines that are costing her now. This story is going to intersect with Superman’s visions.

It turns out some bad guys have brought a being from another dimension to Smallville. Comic fans will know who we’re talking about when they hear Bizarro Superman. In the comics, Bizarro was created by a duplication ray that made an almost opposite Superman with a blocky, crude look. He was very much akin to Frankenstein’s monster. He was rather innocent and spoke in a choppy language like: “Me ugly.”  He fell in love with Lois, and once spurned used the ray to create his own Lois. They flew off to form their own world, which became Bizarro World. The place was populated by Bizaro Supermen and Loises. To make them feel better, Superman even fashioned their planet to be a square instead of a globe. Throughout the Superman comic history there would be different versions with different stories. Sometimes he was a villain and sometimes a hero. This version is pretty much set apart from those original comic origins.

In this show the Bizarro Superman gets scarred by his travel from his dimension to ours. He’s also more aggressive than our Superman, and a few episodes are dedicated to his arrival and confrontations with Superman. Superman seeks the help of his imprisoned brother, Tal-Rho (Rayner), who takes him to his own Fortress of Solitude in the desert. There we meet Superman’s mom, Lara (Klaveno). Now we know why Clark was always attracted to women with L names like Lois Lane and Lana Lang. When the two Supermen collide, the truth comes out and the two story lines converge.

Ally has a pendulant that connects her to herself in another dimension. She’s been using her cult to gain strength. The pendulant allows visions of the other world and now they believe they must merge with their other selves to be their best selves. Ally plans to merge the two Earths and it will be pretty destructive to all on our world.

We visit the other world and find many changes. It’s very much a mirror world with even writing backwards. There the Kents have enjoyed celebrity status because Clark’s identity as Superman is known to the world. There it’s son Jonathan (Elsass) who has powers instead of Jordan (Garfin). Jonathan is on Ally’s side, as is that world’s Lana Lang. So we get into conflicts of doppelgangers and various versions of known characters throughout the season with the ultimate goal to stop the merge from happening.

There are several other stories running through the season. Lana (Chriqui) is running for mayor. Her daughter Sarah (Navarrette) is dating Jordan, and the secrets get in the way of the relationship. Lana also discovers a secret from her own husband, and that family appears to be breaking up. John Henry ends up in a coma because he came to Superman’s aid one too many times, and Natalie builds her own suit while still resenting Lois and particularly Superman. Jonathan ends up taking X Kryptonite to compete on the football field and it seems like family is an ongoing theme for the season and the series in general. This is also Jordan Elsass’s final season as Jonathan Kent. The role will be taken over by Michael Bishop in the third season.

There are 15 episodes on four discs.

Each episode is presented in its original broadcast aspect ratio of 2.20:1. The 1080p image is arrived at with an AVC MPEG-4 codec. There are five episodes per disc, and that helps the bit-rate somewhat. There are good production values here, and you get something better than broadcast or streaming, to be sure. Black levels are fair, and the colors do pop on this show in particular.

The DTS-HD Master Audio 5.1 is much more dynamic than the video presentation. The score is very uplifting and pierces through even when it’s not overly loud. You still always hear the dialog with clarity and perfect placement. The surrounds complete the immersive experience with wind while he’s flying and sweet sub range during the more explosive scenes.

The Heart Of Bizarro: (9:58) This feature gives us a look at this season’s version of the long-standing Superman hero/villain.

The DC Heroes – Path To Glory: (17:22) It’s a look at the dynamics behind the various DC heroes with clips from all of the CW/DC shows.

The season ends with the construction of a new Fortress of Solitude. This one is out to sea and offers us a glimpse into the family dynamic of the next season. “You have to focus on your strengths, right?”

Gino Sassani is a member of the Southeastern Film Critic's Association (SEFCA). He is a film and television critic based in Tampa, Florida. He's also the Senior Editor here at Upcomingdiscs. Gino started reviewing films in the early 1990's as a segment of his local television show Focus. He's an award-winning recording artist for Omega Records. Gino is currently working on his 8th album Merchants & Mercenaries. Gino took over Upcomingdiscs Dec 1, 2008. He works out of a home theater he calls The Reel World. Favorite films: The Godfather, The Godfather Part II, The Body Snatcher (Val Lewton film with Karloff and Lugosi, not the pod people film), Unforgiven, Gladiator, The Lion King, Jaws, Son Of Frankenstein, The Good, The Bad And The Ugly, and Monsters, Inc.
Walker: Season Two Electra Glide in Blue (Blu-Ray)