Posted in: Disc Reviews by Gino Sassani on October 19th, 2022 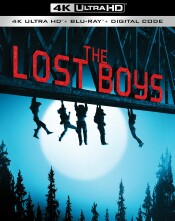 “You think we just work at a comic book store for our folks? This is just a cover. We’re dedicated to a higher purpose. We’re fighters for truth, justice, and the American way.”

In the 1980’s The Two Corey’s became somewhat of a Hollywood fad and worked well to bring the teens out to the movies. They did eight films together, and it all started with The Lost Boys. The guys’ paths had crossed several times, with both being up for some of the same parts. But it wasn’t until this film that they actually met, became friends, and started a trend. Unfortunately, times would not go well for either Corey. The life would take its toll, and Corey Haim died at a too-young 38 in 2010. Corey Feldman would not do much better. His own experience with sexual abuse in the industry bought him a hard time getting roles for a while, as the industry wasn’t too happy that he was opening up these Hollywood closets. He turned it into a cause and has worked to help others in that same situation. He was literally a decade or so ahead of his time. Today these accusations are taken much more seriously, and he’s been more than vindicated over the years. But it all began with The Lost Boys, a film that made vampires more fun and kid-friendly. Now Warner Brothers has brought it out in UHD Blu-ray in full glory 4K.

Lucy (West) is a recent divorcee with two boys, Sam (Haim) and older brother Michael (Patric). They move from their big city home to a small California coastal city to live with her father (Hughes). The boys aren’t happy. The town looks like a sleepy one, and Grandpa doesn’t have a television set. He does, however, love reading his TV Guide. It doesn’t take long for all three new residents to be seduced by their own part of the town.

For Michael it’s a girl named Star (Gertz), who runs with a motorcycle gang that appears to be the terror of the town. Their leader David (Sutherland) takes an interest in Michael and invites him to be a part of the gang. We soon discover they are vampires, and now Michael is on his way of becoming a vampire himself. For Sam (Haim) it’s the two brothers who run the local comic book store for their parents. Enter the Frog Brothers, Edgar (Feldman) and Alan (Newlander). They appear to be aware of the local vampire problem and try to warn Sam about them. They give him a vampire comic and their number in case they should encounter the living dead. Sam pushes it all off as crazy until he discovers his brother casts no reflection in the mirror. For Lucy it’s the owner of the video rental store, Max (Herrmann). He offers her a job and some much-wanted companionship. But the boys suspect he might be the vampire and offer a few hilarious attempts to expose him. Things get deep for all concerned, and it all leads to a monster smash-up at Grandpa’s home and a few clever reveals as the boys go on a vampire slaughter.

The film remains one of my favorite vampire films to date. The cast was perfect. You could really see that instant chemistry between Haim and Feldman. Feldman is over the top with his “just the facts” demeanor about vampires and a character who never quite understands just how in over his head he truly is. It’s not a surprise that these two ended up friends and doing quite a few films together. The cast goes against type with Kiefer Sutherland as David, the gang-leader vampire. I still consider it one of his best performances, and yes, I think it’s much better than his outing in 24. Edward Herrmann is an underrated actor to be sure. He’s got such a wide range that runs from comedy to horror to drama. He’s got this huge presence about him and the ability to go from almost invisible timid to extremely huge and terrifying. Can’t say enough about Barnard Hughes, who plays Grandpa here. He’s another huge presence who can do comedy and drama simultaneously.

The film’s atmosphere is one of the best aspects of the movie. There are so many wonderful moments from the misty cinematography by Michael Chapman. This is the man who gave us Raging Bull and Taxi Driver. He knows how to build atmosphere, and I’m not sure the film works with someone else running the cinematography. Bo Welch complements the cinematography with wonderful production design that makes the film so visceral. He’s been nominated for four Oscars for production design and deserved to win two of them hands down. Finally, the use of music, and I’m not just talking about Thomas Newman’s score here. There are wonderful ethereal moments that work with the right source music. You can cite plenty of horror films that have one or two of these elements, but I dare you to site the last vampire you’ve seen that excels at all of them. It’s the perfect blend … the perfect storm of atmosphere that makes this a truly standout film in any genre. Hey, it doesn’t hurt that the kids have a Siberian husky.

The Lost Boys is presented in a slightly modified aspect ratio of 2.40:1. The ultra-high-definition image presentation is arrived at with an HEVC codec at an average of 65-70 mbps. The film was shot on 35mm so is native 4K. The restoration brings out the best in the film without eliminating those elements that are so crucial to all of that atmosphere I’m talking about. The film sports wonderful black levels. Thanks to the power of HDR, we can have all of that shadow definition, but in a way that this unique cinematography intended. You don’t lose that wonderful subtle lighting to any of the improvements. Long shots are particularly detailed. You just can’t resist those boardwalk shots with the pinpoints of colored lights against a misty black background. I was impressed at the bridge scene. On the Blu-ray it was so muddy that you couldn’t get the detail of the facial expressions as each drop from their hold. This scene truly shines as an example that you can clean things up to a high degree without losing the subtle things on film that add so much to what you are seeing.

The DTS-HD MA 5.1 audio presentation does what it needs to do. This isn’t going to be quite the improvement. The surrounds aren’t terribly aggressive, nor should they be. The surrounds are used to create depth and a little bit of background ear candy. The dialog cuts through pretty much like it did in the past. The improvement is in that music. It is so crystal clear now, with a dynamic range I didn’t even recall from the theatrical release.

The extras found on the Blu-ray are the same from the 2006 release.

I have fond memories of this film, and I hadn’t seen it in over a decade. This was a joy for me and one of the reasons we do this kind of thing. Warner Brothers has done great work on many of these image presentations even if they don’t always keep up on the audio side of things. I felt this to be one of their better presentations in 4K, and it gives me hope for things to come. I suspect there are still some classics on the way. “You just have to keep up.”

Gino Sassani is a member of the Southeastern Film Critic's Association (SEFCA). He is a film and television critic based in Tampa, Florida. He's also the Senior Editor here at Upcomingdiscs. Gino started reviewing films in the early 1990's as a segment of his local television show Focus. He's an award-winning recording artist for Omega Records. Gino is currently working on his 8th album Merchants & Mercenaries. Gino took over Upcomingdiscs Dec 1, 2008. He works out of a home theater he calls The Reel World. Favorite films: The Godfather, The Godfather Part II, The Body Snatcher (Val Lewton film with Karloff and Lugosi, not the pod people film), Unforgiven, Gladiator, The Lion King, Jaws, Son Of Frankenstein, The Good, The Bad And The Ugly, and Monsters, Inc.
The Trials of Oscar Wilde (Blu-ray) Orphan First Kill (Blu-ray)