Posted in: The Reel World by Jeremy Butler on October 21st, 2022 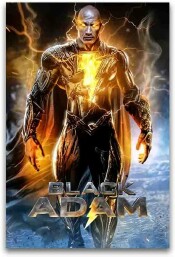 “Some people aren’t meant to be heroes.”

Black Adam was a unique experience. It was an occasion where a being that kills without hesitation is viewed as more of a hero than those that exercise restraint while fighting for justice. This is a principle that was leaned into during the film’s marketing campaign, which for me generated a great deal of intrigue, and I was glad that it was not just a marketing ploy. The fact is that Black Adam is very much an anti-hero. However, he did not start out that way. He was initially just a supervillain, one that was and likely still is intended to serve as the primary antagonist to Zachary Levi’s Shazam. For this film, he embraces the role of anti-hero, which is in keeping with his comic book roots, which saw the character shift from villain to anti-hero. Simply put, he is a dark hero; someone you love watching even when he is doing morally questionable things. Who better to embody that idea than Dwayne Johnson. During his wrestling days, Dwayne Johnson, then known as The Rock, did stints as both a face (a good guy) and a heel (bad guy). Even when he was a heel, he was among the most popular superstars of that era. He could make you cheer for him, even when he was cheating. He had presence. And in Black Adam, Johnson very much calls on those talents.

Prior to this film, my knowledge of Black Adam was limited. I knew of him, but he was never one of the first characters that I thought of when I thought about DC characters. Nevertheless, with the announcement of Johnson’s casting as the titular character, I did my due diligence. The influence of Geoff Johns, a former DC Entertainment executive who still works with Warner Bros on the development of the DC Extended Universe, is clear in Black Adam’s portrayal. As a former writer for the JSA comic series, in which Black Adam is featured, he and David S. Goyer were responsible for the redefinition of Adam’s personality and background, focusing on the character’s old-fashioned and militant ideals of justice. This is the version of the character that we see on screen. Adam does not hesitate to kill. In fact, within seconds of his appearance, he commits wholesale slaughter without batting an eye.

This naturally brings him into conflict with Justice Society of America (JSA), who make it their mission to bring the demigod down. Now, I really want to get into the JSA inclusion, but not quite yet. There is still much to be said about Black Adam’s views regarding justice. Views that are similarly shared by the people of Kahndaq, who spent centuries under a tyrannical rule, a cycle that has recently repeated itself, as the city finds itself under military occupation of a well-known DC criminal syndicate (Intergang). Speaking of Intergang, this serves as cinematic debut of the group. Unfortunately, not enough was done in my opinion to fully explain the group to the audience. No real backstory or explanation of agenda, just a brief explanation about the group’s occupation in Kahndaq that is quickly forgotten. Given that this was the group’s debut, I’d hoped for more of an impactful introduction. In reality, they only serve a minor obstacle for Johnson to plow through with ease.

Speaking of introduction, let’s circle back to the JSA, the O.G. Justice League. For me, this was the most exciting aspect when the movie got announced. To have finally have a big screen representation of the group was something that I never thought would come to fruition. There were some hiccups with the execution, but on balance, I was very happy with the group’s introduction. Similar to what happened with Intergang, not a lot of time is spent on properly introducing these characters. If I’m honest, that may have been my only issue with them. It would’ve been great to get some backstory on them, especially their leader, the infamous Carter Hall, aka Hawkman. As I said, the performance was great, which is all I’ve come to expect from Aldis Hodge ever since he distinguished himself as a breakout talent on the original Leverage series as well as its continuation series. Hodge acts as the anthesis of Johnson’s character, as Hodge’s Hawkman was against extrajudicial killing, believing that heroes don’t kill. This naturally brings him into conflict with Johnson’s Adam, who sees himself as judge, jury, and executioner. This made for multiple epic showdowns between characters, and while Hawkman clearly was not an even match for Adam, I’ll say that he held his own. One of my favorite scenes in the film was the first Hawkman suit-up scene. I couldn’t think of a better way than that. I wish that the film had delved more into the characters motivations, as I believe an important aspect of Hawkman’s personality was glossed over. During the film, the death of an important character is foreshadowed, and while it is hinted at that Hawkman does not fear death, the reasoning for that is never stated. I think the inclusion of that would’ve made the character all the better.

Fear not, I’m going to miss the opportunity to speak about another significant character who made the movie a must-see for me. What can I say about Pierce Brosnan as Kent Wilson, aka Doctor Fate? He is a great source of wisdom for the JSA, as well as a chief strategist and at moments, comic relief. More than anything, he is the one who shows the strain and toll that living the life of a hero has on a person. He’s weary, but despite this he still does his best to try to guide the new recruit as well as his out friend, Carter. Speaking of new recruits, we are also treated to the introductions of Cyclone and Atom Smasher. However, these are clearly secondary characters, as no real time is dedicated to focusing on them. There are some scenes to suggest a possible romantic connection, but this is clearly a ploy in order to get the audience invested in hopes of a larger project focused on the JSA. While I am not opposed to this idea in concept, something tells me that in the event that such a project is green-lit, one or both of these characters may written out of it in favor of characters that are much synonymous with the JSA; such as Star-girl or Hawkgirl.

Something that the film does well is that despite being on opposite sides, it is clear that both sides are attempting to do what they believe is right. The JSA may not like how Adam does things, but they recognize what he means to the oppressed people of Kahndaq, he represents hope, especially given how ignored the city has been by other heroes prior to Black Adam’s appearance. And while Black Adam prefers to do things his way, he also recognizes that he is far from a hero and that his rage presents a legitimate threat to those he is trying to protect. Despite their differences, they are forced to work together to accomplish a common goal. What is enjoyable is watching them clash as they work to achieve this goal.

Without doubt, Black Adam is the premier movie of the season and is destined for a landslide blockbuster win this weekend. While the aforementioned hiccups do affect the overall story quality, making it a good movie instead of a great one, the collective star power of Dwayne Johnson and inclusion of a classic superhero group is enough to make the film a must-see. And make sure you stick around during the credits, as there is an additional scene that features the return of a beloved character and sets up hope for the future for the DC Extended Universe.

Jeremy Butler is a film school graduate of the International Academy of Design and Technology. He is been writing for Upcomingdiscs since 2012; however, movies have played a big part of his life for much longer. Favorite genres include horror, science fiction/fantasy, and comedy. Favorite movies are V for Vendetta, Boondocks Saints, Kiss Kiss Bang Bang, and The Godfather.
Beast (2022) (Blu-ray) Krypto the Superdog: The Complete Series