Krypto the Superdog: The Complete Series 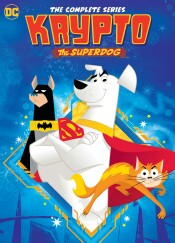 As many of you are aware, DC League of Super Pets was recently in the theaters (technically it’s still in theaters, but at the end of its run) and drew an estimated $93 million with another $110 million worldwide for a total of over $200 million.  Certainly a hit on most fronts, I unfortunately was stuck at work while my wife and seven-year-old decided to go to a showing.  They both enjoyed it very much, and having caught it later on HBO MAX, I can certainly see the appeal.  Little did I know, but about 15 years earlier, a short-lived cartoon series named Krypto the Superdog ran for 39 episodes (72 half episodes and three full length specials).   To my amazement, the set showed up on my desk the other day in all of its complete series glory.  My son was pleased.

We start off the series with the two part episode – Krypto’s Scrypto.  In this episode we are taken back to Krypton to see a young dog named Krypto (voiced by Sam Vincent) who just so happens to be the pet of Kal-El (of course, this is Superman).  One day after fiddling with the instruments aboard a rocket ship, the puppy is transported into outer space.  Eventually he finds food aboard this rocket and even plays catch with himself.  Then the puppy goes to sleep.

He wakes up an unspecified time later (I’m guessing a few years, but there is a space-time issue here, because Superman has already been on planet Earth for at least two or three decades, unless dogs live to an extremely long life, and maybe I’m giving too much thought to this) as the ship makes its final descent upon the planet Earth.  After which, the ship promptly crashes into a tree.

Krypto, now a full-fledged adult dog, gets out of the rocket and notices that he has various superpowers.  Strength, the ability to fly, and heat vision among other powers as he tries them on for size.  But the dog wants friends, and more importantly an owner, more than anything else.  He finds that owner in a boy named Kevin (voiced by Alberto Ghisi) who is being bullied by other kids.  Later, after some negotiation with the parents, they let him keep the dog, unaware of his superpowers.

But Krypto was not born to be just some kid’s lapdog; he must fight crime!  Wait, what’s that we hear?  Looks like some zoo animals are aboard a drowning ship, and he must save them.  Up, up, and away!

Of course, Krypto has friends to help him out in these thrilling adventures.  There is Streaky the Cat (voiced by Brian Drummond) who is a sidekick and has similar powers to Krypto since they were duplicated (powers-wise) in one of the episodes.   Then there is Ace the Bat-Hound (voiced by Scott McNeil), who is the loyal pet, I mean partner, of the one and only Batman.  We are also introduced to the Dog Stars Patrol, a group of alien dogs who keep the universe safe.

These heroes will take on the likes of Mechanikat (voiced by Mark Oliver) and Snooky Wookums (voiced by Nicole Bouma).  But they will also face heavy opposition from Lex Luthor’s pet iguana, Ignatius (voiced by Scott Neil … again), Joker’s Hyenas, and Penguin’s Bad News Birds among other characters with the evilest of intentions.

The show does its best to keep a good selection of characters, good and bad, to give depth to the plot every episode.  I did find some episodes very charming, but to be frankly honest, most of them either involved Ace or the Dog Star Patrol.  Mechanikat is the only villain that presents any true “danger” to Krypto.  Any of the others are there for a corny laugh or mere fodder to push across a plot.  Early on, they often tried writing episodes to fit the Kevin and Krypto relationship, but they were about as dull as that kitchen knife from the back of the drawer.

Thankfully, that’s mostly abandoned midway through the first season.  However, that tends to get replaced by a lot of Streaky when I would have rather seen Ace (who only shows up in about a fifth of the actual shorts).  Seriously, they could have just made up pets and mimicked various DC superheroes and I would have had a much better time with the show.  I watched half a dozen episodes in a row a couple of times with my son, and they really start running together after a while.  My son liked it well enough, but I could tell that even he got bored three or four episodes into a marathon.

As far as technical information, there are three language and subtitle options.  English, French and Spanish.  In addition, it is nice to see cartoons in a widescreen format.  There are five discs and roughly eight episodes on each disc, so it’s nearly three hours a disc, which isn’t too bad for compression.  The problem actually lies in the packaging, where Warner Bros kinda dropped the ball and gave us a 5-disc stacker.  There are no extras here either to speak of either.

The first season had a full 26 episodes, and the second season was split into 13 episodes.  With the final episode named Igunaukkah and being about, well, Hanukkah, we know the show wasn’t going to have a long life.  When there are five (or was it six) different shorts about what happens to Krypto when he’s near red kryptonite, the writing team just plum ran out of ideas.  I certainly don’t hate the cartoon, but I don’t particularly like it either.  My recommendation is to take it in small does, watch an episode here and there, and just maybe you’ll enjoy.

For a full episode guide, feel free to visit – https://en.wikipedia.org/wiki/List_of_Krypto_the_Superdog_episodes

Michael Durr has been reviewing movies for the better part of fifteen years now. He primarily enjoys thrillers, sci-fi, animation and even a little courtroom drama. His favorite films include Escape from New York, the Goonies and anything with Alyssa Milano. When he’s not praising Kurt Russell as the greatest actor of our time or scratching his head over a David Lynch flick, he’s spending time at home in Texas with his lovely wife, Lori and his amazing son. How they put up with him is a mystery, but even Basil Rathbone doesn’t have the time to solve that one.
Black Adam Ed Sullivan’s Rock ‘n’ Roll Classics