Posted in: Disc Reviews by Jeremy Butler on October 21st, 2022 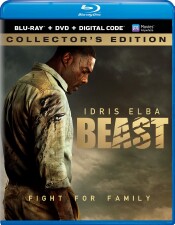 “We’re in his territory now.”

Given the film’s premise, this strikes me as the perfect tagline for the film. A family on safari finds themselves trapped and stalked by a lion with a bloodlust. It definitely evokes memories of the Val Kilmer and Michael Douglas-led 1996 film, The Ghost and the Darkness. In this instance, of course, they rely on the acting chops of Idris Elba to keep the film from descending into cliché. And while there are some situations that seem avoidable and unrealistic, the film did a great job of maintaining my interest for the duration. Joining Elba is Sharlto Copley, another talent with an extensive resume. My only gripe about Copley is that he felt underutilized, and I felt there were intriguing developments with his character that if fleshed out would have added a greater degree of depth to his character. However, this of course was out of Copley’s control and in no way negatively impacts his given performance. Just one of those things that results when you only have a limited amount of time to tell a complete story. Despite this, I still found Beast enjoyable and recommend the experience. I mean, come on, Idris Elba vs. a lion; that’s worth the price of admission in itself.

Elba plays Dr. Nate Samuels, a recently widowed husband, who returns to South Africa where he first met his wife, on a long-planned trip with his two young daughters, Meredith and Nora. From the opening of the film, it is clear that this a family divided, and it is easy to discern that recent death of Nate’s wife and the girls’ mother is the cause for the division. The rift is primarily between Nate and his eldest child, Meredith, as the latter clearly holds a great deal of resentment towards her father for his obvious prioritization of his career, which seemingly resulted in martial separation prior to her mother getting sick. The rift between the two is front and center from their opening exchange, and I believe that this played to both characters’ advantage. For the Nate character, it emphasized his regret over the separation and inevitable loss of his wife, as well as his desperation to heal the rift between himself and his eldest child. In reference to the Meredith character, it provided strike during pivotal scenes, as she tends to disregard her father’s instruction and act of her own volition, this disobedience landing her in hot water multiple times, with the lion as well as her sister, who felt compelled to chew her sister out about airing her grievances during a life-or-death situation.

Joining the family is Martin (Copley), an old family friend and wildlife biologist, who takes them to a game reserve for a safari. This provides the up for the conflict, as the group find themselves stalked by ferocious wild lion craving human flesh, as it begins attacking them and killing anyone in its path. The Martin character was an interesting one, as he is an important figure, but much of his history is not addressed. There was one element regarding some of his activities that I found very interesting, but unfortunately it wasn’t pursued. It was only hinted at very briefly early on and confirmed midway through the movie. I would have loved to have seen this aspect fully addressed. I think it would have given greater context to this character. I don’t want to ruin it for anyone, but this reveal showed that this ultimately morally good character did possess a darker side. In the grand scheme of the overall film, it does not affect it credibility, but to my mind, its inclusion could have added additional intrigue.

Now for the part that is going to decide whether or not you deem the film worth seeing: Elba’s inevitable confrontation of a crazed and bloodthirsty lion. I know what you’re thinking. Does the Dark Tower and The Suicide Squad actor hold his own? In an answer, yes, he does. Given that it is Idris Elba, I would expect no less, but given the type of character that he is playing, it was important that the battle appear authentic. Meaning, he couldn’t be seen laying the smackdown on the apex predator. There is a point during the pair’s final confrontation that was reminiscent of a two heavyweight boxers going toe-to-toe. This is made realistic by the fact that Elba’s character for the most part is never far from receiving a death blow, and he is fighting to survive, as anyone in that situation would be expected to be doing. Of course, there could only be one winner, and for the sake of a good ending, the inevitable was obvious. But how he won was going to be an important factor; brawn could not be used. Wit was going to have to be the deciding factor, and thankfully it was.

Beast is presented in its original aspect ratio of 2.39:1. The 1080p image is arrived at with an AVC MPEG-4 codec at an average 30-35 mbps. The high-definition image presentation is pretty solid. The African locations are quite beautiful. The computer-generated lion blends flawlessly with the live action and surroundings. I have to admit I’m getting spoiled by UHD/4K discs, and I find myself thinking about how this would look at a higher resolution. All in all, this one is still pretty good. The colors aren’t really there to pop, so expect a lot of drab colors and tons of earth tones. Black levels are important, because a lot of this occurs at night, and we get fairly good shadow definition even if the blacks aren’t as deep and inky as they could have been. Costume textures come through nicely, and the fur even on a computer-generated lion is pretty convincing.

The DTS-HD Master Audio 7.1 is not overly aggressive. The score is intended to be subtle, and there aren’t too many deep sub moments. However, subs aren’t invisible. They add a nice dynamic to the lion sounds and even the dialog by offering just that hint of depth to give it a better sense of realism. Occasionally distant rumbles or even winds add just enough to the surrounds to pull you into the environments.

Creating The Beast: (4:07) A nice look at the lion designs and how practical f/x as well as CGI were combined to add to the realism. While most of the shots are indeed digital, there were large lion faces and claws to interact with the actors in close-up situations.

Man vs. Lion – The Final Battle: (2:57) More behind-the-scenes footage, this time focused on the big climax.

Making It Real – The Wounds: (4:10) Even the wounds are a mix of digital and practical f/x.

Filming In The Beast’s Territory: (5:03) This feature gives us a feel of the real African locations. We get a look at the advantages and the logistics of getting everyone and everything to remote locations. The village and the watering hole are the focus of the behind-the-scenes material. They created the watering hole by drilling into the water table and left it for the animals when they left.

Family Bond – The Cast Of Beast: (6:04) This is a nice look at the bonds and relationships that developed between Elba and the two girls who play his daughters. Some nice candid stuff here.

Lion’s Pride: (7:42) This is pretty much a PSA to bring awareness to the plight of the lions from poaching and habitat destruction.

Man vs. nature films were once a huge industry, particularly after Jaws came out in the mid-1970’s. People found themselves running from bears to bees to alligators. The genre still exists, but it’s been a while since we’ve had one of this budget on dry land. It’s a solid film that didn’t really perform well at the box office, and that’s somewhat a shame, if only to have caught Idris Elba twice this last summer in your local multiplex.

Jeremy Butler is a film school graduate of the International Academy of Design and Technology. He is been writing for Upcomingdiscs since 2012; however, movies have played a big part of his life for much longer. Favorite genres include horror, science fiction/fantasy, and comedy. Favorite movies are V for Vendetta, Boondocks Saints, Kiss Kiss Bang Bang, and The Godfather.
Orphan First Kill (Blu-ray) Black Adam