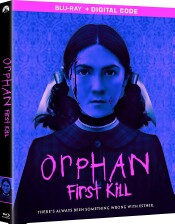 I must confess that I missed the boat on the original film, so going into this film I had reservations regarding my ability to properly review this film given that I haven’t seen the original. These concerns were made irrelevant by the revelation that this film, Orphan: First Kill, is actual a prequel to the first film. In this film, we get to see the events that led Leena Klammer to become what several people in the film call her: a monster. In 2007, Klammer is a 31-year-old psychiatric patient with a rare hormonal disorder called hypopituitarism that gives her the appearance of a 10-year-old child. After orchestrating an escape from the Saarne Instituute in which she manages to kill at least two people, Leena researches missing American girls and finds that she bears a resemblance to a girl named Esther Albright, and hatches a diabolic plan. However, it is not long before she realizes that in this seeming ordinary role that she has managed to slither into that she is not the only one with blood on her hands.

The predator becoming a prey was the thing that I most enjoyed about this film. Based on what I put together about the previous installment, Isabelle Fuhrman’s Leena Klammer was the thing that went bump in the night. Granted, she is still not to be underestimated here, especially given the things that she does in order to keep her cover. She even goes as far as to destroy an object of affection in order to keep her secret. That being said, she is hardly the worst person in the film in my opinion, as there is another killer willing to go to any lengths to ensure that their secret does not come out. To that end, I was treated to a cat-and-mouse game between these two, as they both attempt to gain the upper hand and rid themselves of the other without exposing their own dark secrets. This was mutually assured destruction personified.

Another good attribute of the film is that it functions well as a standalone. Initially, I had reservations that elements of the film would be over my head due to my lack of knowledge about the original film. Fortunately, that was not an issue, most likely due to the fact these events are supposed to have occurred prior to that film. Even so, it was initially a real concern, but to my knowledge the only commonality between the films is Isabelle Fuhrman’s reprisal of the role and the Leena Klammer character herself. I say that to say that while I do encourage seeing the films as they were originally intended, I don’t believe anything is lost if you jump right in with this film. Actually, given that it is meant to function as a prequel, it may work well to watch this film before the other one.

As Leena Klammer, Isabelle Fuhrman has presence. She is able to look innocent yet sinister at the same time. I’d say she’s come a long way from her stint as Clove in the Hunger Games. She owns the character of Klammer, essentially making the character synonymous with her name alone. You wouldn’t think that this young woman when you first look at her could be a manipulative and stone cold killer, but within a few minutes of watching the opening events of the film, she will make you a believer.

In regards to Julia Stiles, there is one facet of the character’s personality that was convincing, but another facet of it was more difficult to accept. This is not to say that she didn’t do well; it was just more difficult to see her in that light, as it was a deviation from roles that I’ve become used to seeing her embody. I’d hate to typecast someone, but it will take some time and future similar portrayals to fully shed that skin. But in the spirit of being impartial, I will say that she and Fuhrman have a connection that adds suspense to the film right down to the final conclusion.

Speaking of the conclusion, there was only one way for the story to end given its status as a prequel and that fact that the character stars in an already released film. Even so, I still found the ending suspenseful and enjoyable. Naturally it is opened-ended, but it is my understanding that so is the original film. This may suggest that a third installment to the franchise is possible. If it has the same presence as this film, I’d be amendable to seeing it.

Jeremy Butler is a film school graduate of the International Academy of Design and Technology. He is been writing for Upcomingdiscs since 2012; however, movies have played a big part of his life for much longer. Favorite genres include horror, science fiction/fantasy, and comedy. Favorite movies are V for Vendetta, Boondocks Saints, Kiss Kiss Bang Bang, and The Godfather.
The Lost Boys (UHD Blu-ray) (4K) Beast (2022) (Blu-ray)