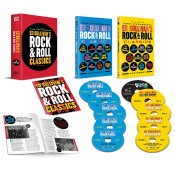 “For more than two decades, families across America gathered around the television every Sunday night to watch The Ed Sullivan Show. Both the country and its music underwent an enormous evolution over the course of those years, and the show not only kept up with the times, it informed them. The long and winding road of music history is full of forks, but from the 1950’s through the early 70’s, one stop was essential: The Ed Sullivan Show.”

You can say that again. Ed Sullivan’s Sunday night variety show first aired June 20th, 1948 and left the air March 28th, 1971. Three years after the show ended, Ed Sullivan passed away, and with him one of the most iconic faces of the entertainment industry. Think about how much America and music changed throughout those years. When Sullivan first started, the music industry was dominated by big bands like those of Benny Goodman and Duke Ellington. The songs were sung by the crooners like Frank Sinatra and Bing Crosby. When the show left the airwaves, the top songs were performed by Elton John, Rod Stewart, and The Rolling Stones. Along the way we picked up the likes of Elvis Presley, The Beatles, and Creedence Clearwater Revival. And Ed Sullivan was there to catch all of it live from his television stage every Sunday night for 1,068 shows. Ed Sullivan didn’t just present acts that were popular. He introduced unknowns to the world, and appearing on Ed’s show meant you were going places. He presented stars, but he made stars.

Some of Ed Sullivan’s episodes were the biggest audiences in television history. The first appearance of The Beatles in America happened on The Ed Sullivan Show, and it brought in 73 million viewers. There were only 190 million people in the country at that time, so almost half of the entire United States population watched that show. If that sounds impressive, just eight years earlier 82% of all television sets in America were tuned in to watch Elvis Presley perform. Today if a show gets a 12% audience, it’s a huge hit. When Buddy Holly first came on the show, most of America had never heard of him. Within weeks he was one of the biggest names on the charts with Peggy Sue, a song he debuted on the show. Stevie Wonder was only 13 when he appeared on the show showcasing his harmonica skills. Sullivan helped to break down racial barriers by being among the first to feature the R&B sounds that became Motown, and he didn’t stand for any nonsense when his guests were in town. Motown creator Berry Gordy made the show a huge part of his strategy in launching acts and new songs. Sullivan personally loved the sound, and in the 60’s Motown acts dominated the show’s stages.

Time-Life has put together a massive collection of these historic moments in music and television history. They went through those 1,068 shows to spotlight some of the biggest names and biggest moments from the mid 1950’s until around 1970. The material is, of course, somewhat degraded at times, but I’m rather impressed with how good it does look. Some of the 1950’s materials in black & white appear to be taken from kinescope copies and show their age, but remarkably the music itself is in pretty good shape. The show turned to color somewhere in the mid-60’s, and these performances generally look much better. None of the clips are degraded to the point of distraction, and I believe you would generally rather have them in whatever shape you find them than not have them at all. As a musician myself, I certainly take that attitude.

There are 10 discs in all, and each contains three “episodes” that feature anywhere from 5-7 acts. They run about 20 minutes, and you can select songs that you want directly. These aren’t reflective of actual show episodes, but rather clips that meet a theme. The first six episodes reflect years, while the rest deal with styles or some other common theme. Here’s a highlight of what you get:

1966: The Association, The Supremes ,and The Rolling Stones

1967: The Mamas And The Pappas, Johnny Rivers, and The Association

Folk Rock: The Band, The Byrds, and The Lovin’ Spoonful

The British Invasion: The Beatles, The Animals, and The Searchers

Smash Hits Of The 1960’s: Petula Clark, Tommy James & The Shondells, and The 4 Seasons

Groovy Songs: The Young Rascals, The Turtles, and Spanky And Our Gang

Move To The Music: Jerry Lee Lewis, Jackie Wilson, and Freddie And The Dreamers

The British Invasion 2: The Beatles, Gerry & The Pacemakers, and Herman’s Hermits

Motortown Review: The Supremes, The Jackson 5, and The Temptations

Sweet Sound Of Soul: Four Tops, The Temptations, and The Jackson 5

Classic Love Songs: Carpenters, The Mamas And The Pappas, and Elvis Presley

The list is subjective with a few important must-haves. You might have wanted to see something that isn’t here. There are thousands of these clips, and you only get nine discs. You have to look at this as a sample, and perhaps if the sales are good enough, more can follow. It’s a very hard collection to release. Music rights are through the roof and cost too much in many instances. I don’t have to remind you what it was like when WKRP was first released with changed music. It’s a real problem, and the fact we got so much here is nothing short of a miracle in itself. Like the bands represented here or not, you can’t argue with their influence on whatever it is you listen to today. OK, you classical guys get a pass … but the rest of you might want to see where it all started.

Each of the discs features a collection of interviews that were all taken in the mid 1990’s. Performers talk about their careers and their appearances on the show. You get a nice history from them about the music movements of the time and some nice anecdotes about their interactions with Sullivan. Most are just about five minutes or less, but there are some that run as long as 40 minutes. Some of these interviews are with Gladys Knight, John Sebastian, David Crosby, Peter Noone, James Brown, Roger McGuinn, Joan Rivers, and Michelle Phillips. These play out nicely to highlight the historic significance of the collection, and it really is something like a seminar on the evolution of popular music from the 50’s to the 70’s. You also get a nift 35 page book that highlights the artists with great photos and fun facts.

The last disc contains a couple of documentaries, and they’re fine but contain a lot of the material you already saw if you’ve watched all of the previous nine discs. You can enjoy listening to some great performances and tell your parents or friends that you’re studying. Studying was never this much fun. “I second that emotion.”

Gino Sassani is a member of the Southeastern Film Critic's Association (SEFCA). He is a film and television critic based in Tampa, Florida. He's also the Senior Editor here at Upcomingdiscs. Gino started reviewing films in the early 1990's as a segment of his local television show Focus. He's an award-winning recording artist for Omega Records. Gino is currently working on his 8th album Merchants & Mercenaries. Gino took over Upcomingdiscs Dec 1, 2008. He works out of a home theater he calls The Reel World. Favorite films: The Godfather, The Godfather Part II, The Body Snatcher (Val Lewton film with Karloff and Lugosi, not the pod people film), Unforgiven, Gladiator, The Lion King, Jaws, Son Of Frankenstein, The Good, The Bad And The Ugly, and Monsters, Inc.
Krypto the Superdog: The Complete Series The Flash: The Complete Eighth Season (Blu-ray)