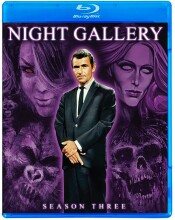 “Good evening. Let me welcome you to this parlor of paintings. We offer them to you for your enjoyment and edification. Feel free to dwell on them at your leisure and in your own good fashion, but kindly don’t touch, because here they frequently touch back.”

When I mention the name Rod Serling, I’ll bet that The Twilight Zone is the first thing that pops into your head. And why not? It would be very hard, indeed, to argue against the impact that The Twilight Zone has had on television. To say that the series was a milestone in that medium would be an understatement of the worst kind. When Rod Serling brought his landmark series to CBS in October of 1959, television was still very new. No one was quite sure what the future held for that magical box. For five years Rod Serling would enter our living rooms with the most bizarre tales we’d ever seen. But no matter how exotic and strange the stories might appear on the surface, Serling always brought our own humanity into vividly sharp focus before it was over. When the series had run its course, we didn’t hear much from Serling for over a decade. He continued writing, of course. His screenplay for the 1968 Planet Of The Apes would lead to record breaking at the box office, but Serling’s home was always that magical box, and it didn’t take long for him to find his way back.

“Time again for your weekly sojourn in the nether regions, where we hopefully offer you paintings that prove that insomnia is much to be desired over somnolence. Far better a wakeful night than an unwelcome dawn, if you will. All of which is perhaps a slightly agonized invitation to keep your eyes open here. We offer you paintings like this one. A graphic illustration of one of the most persistent and eternally recurring nightmares shared all too commonly by all of us. That fear of being hopelessly trapped in some inescapable circumstance, and with it the hope that we can discover an exit. The title of this painting is The Other Way Out, and it poses the question, is this trip desirable? Because this is the Night Gallery.”

Serling developed an idea for another television anthology series. This one would lean more toward the horror genre but still touch upon many of the same themes he broke ground with earlier. He called it The Wax Museum. The idea is that he would introduce the stories through the wax figures in this ethereal museum and use the theme to create a unifying theme for the stories. He shopped it around but had trouble finding any takers. He was pretty much about to give up on the idea when he joined with Jack Laird. Laird had cut his television teeth as an executive producer on the early 1960’s medical drama Ben Casey, starring Vince Edwards as the young heartthrob doctor. He later produced several Bob Hope television specials, and he was the one who saw the potential in Serling’s idea. But he tweaked it a bit so that instead of rather costly wax figures, the stories could be introduced with paintings, and so instead of a wax museum we would be invited into a Night Gallery. Serling agreed to the changes and took his place as writer and host of the new show. It wouldn’t quite be another Twilight Zone experience for him, however. He had to give producing control to Laird, who made him submit his stories and often rejected or changed them. Serling would no longer be the guy in charge. He’d just be the front man, and while the collaboration brought some classic television, the show never lived up to the hype or expectations that The Twilight Zone had created. Night Gallery would always live in the shadow of The Twilight Zone, but it would be a mistake to dismiss it out of hand. Now Kino has brought the shows back, and with, like many of Serling’s own tales, a bit of a twist.

You see, The Night Gallery didn’t last as long as The Twilight Zone. It ran for one full season ,a very short 6-episode first season. and a 15-episode run for its last. That left a total of only 52 episodes, well short of the 75-100 required for syndication. There was money to be made, but it came at a huge cost for anyone who was a fan of the series and hoped to catch them again in reruns. The original episodes ran an hour in length. For syndication that was cut to a half hour, so now there were over 100 episodes. The problem was how they made the stories fit the new format. During its prime run, the hour featured anywhere from two to three stories. They, of course, varied in time from just a handful of minutes to over 40 minutes each. To create the half-hour episodes, stories had to be broken up and teamed with different stories than originally appeared. That wasn’t so bad. What hurt was they still had to both chop episodes and fill others. The chopped episodes often removed important information that now completely changed the story. The additions were even worse. Using the Irwin Allen school of production, Universal took clips from unrelated films and other properties and started to fill short episodes with material that often made no sense at all. These discs include a feature that gives you the breakdown of some of the worst of these decisions. Early video releases gave these re-edited episodes, so it’s been quite a while since anyone has really seen the show exactly as it aired starting in 1969. Kino has recreated these original episodes, and that alone makes this collection a must-have for your video library.

The final season moved to just a half hour, so very few of them have multiple stories and fit the syndication package with less alteration.

Serling didn’t have the same kind of power, but he fought for several things on the show. He always loved giving young directors their first shot. Here Steven Spielberg is practically a teen just out of film school when he directs an episode for the series. Jack Laird directed the largest number of the shows, and Rod Serling contributed the largest share of the stories. Writers also featured Twilight Zone standout Richard Mathison. John Astin from The Addams Family directed a few episodes, and his famous wife Patty Duke starred in one while pregnant with future Hobbit Sean Astin. Many directors also shared their talents on the original Star Trek like John Meredyth Lucas and Leonard Nimoy. Nimoy directed his very first time in the third season of the show.

This was the end of The Night Gallery, which never quite caught the fame or revival fever that Serling got with The Twilight Zone. In the commentary section it was suggested that Kino could release the syndicated package. While many of the shows were harmed more than helped here, there are things from that package that would be interesting to have. “Well, it couldn’t hurt.”

Gino Sassani is a member of the Southeastern Film Critic's Association (SEFCA). He is a film and television critic based in Tampa, Florida. He's also the Senior Editor here at Upcomingdiscs. Gino started reviewing films in the early 1990's as a segment of his local television show Focus. He's an award-winning recording artist for Omega Records. Gino is currently working on his 8th album Merchants & Mercenaries. Gino took over Upcomingdiscs Dec 1, 2008. He works out of a home theater he calls The Reel World. Favorite films: The Godfather, The Godfather Part II, The Body Snatcher (Val Lewton film with Karloff and Lugosi, not the pod people film), Unforgiven, Gladiator, The Lion King, Jaws, Son Of Frankenstein, The Good, The Bad And The Ugly, and Monsters, Inc.
Russell Simmons’ Def Comedy Jam All Stars Mystery Men (UHD Blu-Ray) (4k)