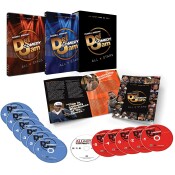 “It’s uncensored, so language and sexual material is off the charts. So if that’s not your style, you have been warned. No political correctness…”

It was the early 1990’s, and record producer Russell Simmons got an idea and brought it to the folks at HBO. In a very short period of time, the half-hour show he created would become the highest-rated show in cable television history. He brought both the big names in black comedy as well as so many newcomers who have gone on to become big stars themselves. This was the days before streaming, and it came on Friday nights just as the folks who usually watch these things were out getting their entertainment live and in person. It was quite an accomplishment to get those folks to stay home and watch a half-hour television show instead. But that’s exactly what happened, and while the series ended in 1997, in five short years it made both television and comedy history.

The series was presented as exclusively for a black audience, and while they played that idea pretty heavily at first, it was clear that people of all races were watching the show. Remember, it was the 90’s, so there wasn’t so much political or woke stuff going on. The shows could appeal to anyone, because while it was targeted at blacks, whites were made to feel comfortable and welcome. Several times on the show there would be a rare white audience member and they’d get picked on a little, but it was all in fun, and there wasn’t any malice toward anyone. I’m a white guy who found the show often funny and almost always entertaining. So don’t be intimidated no matter who you are. You’re going to have some fun here.

Simmons wasn’t very visible on the show. He came out at the end to give a thanks and a blessing to everyone and was out. He allowed the comedic talent to do what they did best. The host duties were performed by many notable comedians, but Martin Lawrence was the most prolific of these hosts. It was Martin Lawrence in the early days of the show that delivered the Whasssssuuuuupppp shout that became a pop icon. It appeared in beer television ads, sporting events, and even on musical performances. If you’ve heard that and didn’t know where it started, it started right here.

There was no shortage in star power here. You see early performances by then relatively unknown standup comics like Chris Tucker and Kevin Hart. Look for early performances by one of my favorite comics, the late great Bernie Mac. Check out Steve Harvey and Tracy Morgan, all unknowns at the time. This was like the Johnny Carson or Ed Sullivan show for black comics. There’s even an episode where they let a white guy on the stage. There was usually about four comics per show, and they all got only about five or six minutes, so they had to be on their game. Most episodes made sure to feature a female comic. Often there were celebrities up in the balcony seats, and the host would point them out and even share a little back and forth.

You get 12 discs with an average of three episodes per disc. There is also a bonus comedy concert hosted by Cedric the Entertainer which really wasn’t connected to the show but featured many of the same comics. Here they enjoyed a longer stage set, so they could get a little bit more crazy. There’s a 26-page full-color booklet with notes on the show and on some of the entertainers featured in the set. Pick it up. Prop up your feet. “Give them a round of applause.”

Gino Sassani is a member of the Southeastern Film Critic's Association (SEFCA). He is a film and television critic based in Tampa, Florida. He's also the Senior Editor here at Upcomingdiscs. Gino started reviewing films in the early 1990's as a segment of his local television show Focus. He's an award-winning recording artist for Omega Records. Gino is currently working on his 8th album Merchants & Mercenaries. Gino took over Upcomingdiscs Dec 1, 2008. He works out of a home theater he calls The Reel World. Favorite films: The Godfather, The Godfather Part II, The Body Snatcher (Val Lewton film with Karloff and Lugosi, not the pod people film), Unforgiven, Gladiator, The Lion King, Jaws, Son Of Frankenstein, The Good, The Bad And The Ugly, and Monsters, Inc.
Planes, Trains and Automobiles (UHD Blu-Ray) (4k) Night Gallery: Season 3 (Blu-ray)