Posted in: Disc Reviews by Michael Durr on November 23rd, 2022 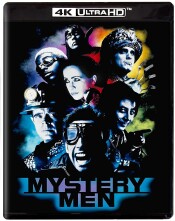 Many times when we watch films for the first time, we get distracted.  Maybe it’s a pretty girl, money issues, or perhaps you had something else on your mind that’s hurting your focus.  Whatever it is, it can really change your interpretation of a movie in a positive or negative way.  One such movie for me is Mystery Men when I saw it in early 2000.  Back when rentals were a thing, I remember renting this film and being distracted completely by someone who shall remain nameless.  I barely liked the movie and didn’t really watch it again until many years later only to realize I liked the film far more than originally thought.  Four or five times later, I revisit the film again, this time in glorious 4K.  Let’s see how it does.

Thunder is rumbling, and we have arrived in the futuristic Champion City.  A place of superheroes and supervillains.  The scene is a private party with some rich senior citizens.  All of a sudden, Big Red (played by Artie Lange) runs in with his gang of bad guys to rob the place.  They steal everything in sight; nothing is safe, not even a prosthetic arm.  But just when you think nothing can save these wealthy elderly members of society, we have a few heroes who might save the day.

All of a sudden, who should appear?  Why, it’s the Blue Raja (played by Hank Azaria) with his skill of throwing forks and other silverware.  Or perhaps we need the expertise of the the Shoveler (played by William H. Macy) with his mighty shovel.    Those two don’t seem to be doing so well.  Anyone else?  It’s Mr. Furious (played by Ben Stiller) to the rescue.  What exactly is his superpower, anyway?  All right, enough of those rank amateurs; surely there is a real superhero somewhere around here.

Captain Amazing (played by Greg Kinnear) settles the score.  He takes out Big Red and the Red Eyes and saves the day.  Amazing even has time to pose for pictures and answer a few questions with reporters.  It’s a shame about that Pepsi sponsorship.  The wannabe superheroes stumble out of the rumble but are approached by one of the guests from the party, Dr. A. Heller (played by Tom Waits), who just happens to be a weapons designer.  We’ll table that one for later.

Captain Amazing takes a ride in his private limo and thinks about his lost sponsor and why he is not raking in the money like he used to.  The fact is that he has cleaned up all of the crime in the city, even the diabolical Casanova Frankenstein (played by Geoffrey Rush) who is staying at a local asylum.  But as it turns out, Casanova is up for parole.  Amazing knows just the person who could influence the parole board, his alter ego Lance Hunt.  The recommendation carries, and Casanova is released.  Daddy is home in Champion City.

Soon, Tony C (played by Pras) and Tony P (played by Eddie Izzard) aka the Disco Boys are back in town.  Their first act is to have the crazy man blow up the crazy house as they take out the asylum with a bomb.  Captain Amazing shows up almost on cue but he doesn’t realize that Frankenstein has a trap set for him to be captured.  Meanwhile, Mr. Furious had decided to track the Disco Boys where he witnessed the capturing of Amazing.  He decides to go back to his friends, Blue Raja and the Shoveler, to tell them what happened.

The three soon realize that they need more than just themselves to rescue Captain Amazing and save Champion City.  The group holds tryouts and unfortunately there are superheroes who might even be worse than this ragtag team.  Personally I voted for the Waffler (played by Dane Cook), but he didn’t make the cut.  The team settles on Invisible Boy (played by Kel Mitchell), the Spleen (played by Paul Reubens),  and the Bowler (played by Janeane Garofalo).  Together, they must learn how to work together, or else they will fail separately and Champion City will crumble under Frankenstein’s rule.

As mentioned in the opener, I didn’t care for this movie very much at first, only to find out many years later that its actually a quite good flick.   There is a huge cast, and all of these actors and actresses mesh quite well in their given parts.  There is no huge star that really shines above the others, and I think that many years later, that’s what I actually enjoy the most.  Ensemble casts tend to have showboating every few scenes in an effort to “spotlight” certain cast members.  That doesn’t happen here.

Even though this is a band-of-misfits movie, it is still at its core a superhero film before there were really a thing.  The Avengers were way off, the Fantastic Four were about five years away, and even Spider-Man wasn’t around for a couple of years. Sure, we had some Batman and Superman films, but there were no real team pictures to speak of.   So in that way, it was quite groundbreaking, and even though it bombed, I think many years later it can be appreciated for really paving the way.

The video is in 1.85:1 widescreen in HEVC / H.265 with a native 4K presentation and averaging about 70mpbs. This is a BD-100 disc, and it clearly shows in its depth as well as its clarity.  Flesh tones are spot on, and the costumes really stand out as homemade, which is what they are supposed to be in the first place.  Take the original costume of the Blue Raja, for example.  The detail in the shawl, brooch, lapels, and other items taken from mother’s closet and silverware drawer are more evident that before.

It doesn’t just show up in the costumes, either; this movie has a lot of scenes in the dark or in the evening, and I can’t recall one time when I felt I couldn’t see the action or make out someone’s face, even in total darkness.  This is helped by the expansive palette choice of the movie blended against the night landscape.  The grain that does exist is completely natural, and even though a lot of this movie is set work, I did not feel at any point that the film felt artificial or anything was overly enhanced that wasn’t there in the first place.

The 5.1 DTS-HD track (there is also a 2.0 track available) feels a little different here from the original Blu-ray even though its the same amount of channels.  Dialog is still crisp as it once was, but it feels like some of the surround field has been opened up, allowing for more substantive effects that distribute from speaker to speaker.  Cars whizzing by, action is more intense and the explosions have some much needed kaboom to give more emphasis to the production.  But at the same time it’s not overly aggressive to where you feel the need to grab the remote and fiddle with it constantly.  Subtitles are only provided in English.

It should probably come a surprise to no one that this film cost $68 million to make in 1999, which by today’s standards is roughly $122 million.  Needless to say, they expected it to clear the $100 million mark in gross sales at a minimum.  It didn’t even come close, netting only $30 million domestically.  Kinka Usher never directed another movie, and the film wasn’t popular even in its initial home release.  However, much like other cult films, it has been steadily rising over the years, and I can honestly say that I’ve liked the film for years, but this is the first time in about four or five times of watching the film where I really enjoyed myself.

Kino’s 4K release really helps to accentuate this by providing an absolutely fantastic video presentation along with a very good audio portion.  The extras are about as good as they are going to get for this type of film until the stigma goes away and the various stars actually admit they were in this film again.  It’s a wonderful film that should have done much better than it did.  Highly recommended for this 4K film, one of the better catalog releases you will find all year.  Enjoy.

Michael Durr has been reviewing movies for the better part of fifteen years now. He primarily enjoys thrillers, sci-fi, animation and even a little courtroom drama. His favorite films include Escape from New York, the Goonies and anything with Alyssa Milano. When he’s not praising Kurt Russell as the greatest actor of our time or scratching his head over a David Lynch flick, he’s spending time at home in Texas with his lovely wife, Lori and his amazing son. How they put up with him is a mystery, but even Basil Rathbone doesn’t have the time to solve that one.
Night Gallery: Season 3 (Blu-ray) Paramount Presents: Blue Hawaii (UHD Blu-ray) (4K)