Posted in: Disc Reviews by Michael Durr on November 18th, 2022 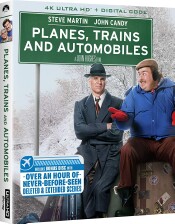 Favorite movies are usually easy to come back to.  It’s a familiar song, stars you feel at home with, and even if you recite all the lines by heart, you can find something new to come back to.  In the case of Planes, Trains, and Automobiles, even though I had seen the movie probably around a dozen times or more, I was lured by the promise of new deleted and extended scenes but also a 4K-quality picture.  But as with life, you don’t always get everything you want.  Let’s take a look.

Please note that portions of this review came from my 2011 article on the Blu-ray, and I have improved on it where possible (and it makes sense to).

New York City, two days before Thanksgiving. Neal Page (played by Steve Martin) is busy waiting on his boss to make a decision about which cosmetics ad to go with. The guy just can’t make up his mind, and Neal has a 6:00 plane ride to Chicago to catch. Finally Neal is able to leave and runs out the door and goes down the elevator out to the street. There is a very long line to deal with to get a cab, and it looks like Mr. Page is going nowhere fast.

Neal at some point does spot a cab, but it just so happens that another guy (played by Kevin Bacon) spots the same cab from across the street. It soon becomes a race to get to the mode of transportation in the shortest amount of time. Ultimately, the other guy wins, and Neal is forced again to look for another way to catch a cab. After more tense moments, he finds an empty cab, only to be taken at the last second by a New York attorney (played by Nicholas Wyman).

Mr. Page pleads with the attorney to let him take the cab instead. The attorney finally settles on $75 to just take the cab away from him. But as soon as the cash is handed over, the cab takes off with a trunk and a suitcase in the back. Neal runs after the cab and catches up eventually. He opens the door only to find a surprised man (played by John Candy) who immediately slams the door back and then the cab takes off to the airport. Neal eventually finds his way to the airport.

Neal calls his wife, Susan (played by Laila Robins) and tells her that he should be home by 10pm. Kiss kiss, see you soon. He gets to the terminal and sits down only to see the surprised man, now known as Del Griffith, reading a copy of “The Canadian Mounted”. Del is a shower ring salesman and is trying to get to Chicago as well. Once Del realizes how he accidentally took a cab from Neal, he tries to make up for it, but Neal just tells him to forget it.

They board the plane, and unfortunately Neal’s first class ticket is really just a coach ticket. He protests briefly before giving up and going back to coach. It just so happens that his seat is next to Del Griffith. Neal is frustrated with the situation and becomes even more unnerved when Del decides to take off his shoes and socks. Before taking a rest, the shower ring salesman is convinced that this plane will not land in Chicago because of the weather outside the terminal.

Later, they are awakened by the cockpit who announces “Welcome to Wichita, Kansas”. Unfortunately, the plane did not make it to Chicago. Upset and tired, Neal tries to find another way out of Wichita. It is not going to happen on this cold night. Del chats up a conversation with Neal, and it seems that he was able to corral a room for the night at the Braidwood Inn. Eventually Mr. Page caves in and decides to head off to the inn and see if he can get a room as well. Little does he know that his adventures with Del Griffith are just beginning.

Planes, Trains, and Automobiles has always been one of my favorite films. The sad fact is that it had been many years since I have seen it. Well, probably since the last time I reviewed it on Blu-ray. But, I regard it as a classic way more than I ever did as a teenager when it was first in theaters.  Steve Martin and John Candy are fantastic together. Steve Martin (despite being funny in his own right) plays the straight man, and John Candy does his best over-the-top comedy performance by being warm and charismatic.

In fact, despite the film really only having two major characters, it does wonders with small yet important roles. We get Kevin Bacon, Edie McClurg, and even Ben Stein in these small but unforgettable parts. Sure, since this is a John Hughes written and directed film, we are familiar with these actors showing up, but they play such good roles that we do not mind one bit. There is very little not to like in this movie (as with most pictures by Hughes), as long as one is able to stretch reality just a little bit.

But PTA (as I have started to call it over the years), is something very important (that is missing from many movies today) in addition to being hilarious. It has a heart of gold. Despite all of the horrible things that happen between Neal Page and Del Griffith, the picture does a fantastic job to bring it together in the end. The ending is amazing, and we learn so much about Del Griffith and how wonderful a man he really is. If there is a dry eye in the house after this movie, then perhaps the viewer needs to go find a heart, because they surely lost the one they had.

The video is in 1.85:1 widescreen in HEVC / H.265 with a native 4K presentation. The disc runs about 80 mpbs on average(BD-66 disc).    That sentence would be the highlight, unfortunately.  From the moment that we stare into the boardroom for our first scene, there is something completely unsettling.  Steve Martin’s face is very soft, as is the rest of the set around him.  It looks as if they haven’t dusted in years, and there is this hazy film around everything.

Moving on from the boardroom to the elevator and to the streets of New York below, Kevin Bacon is almost unrecognizable as he and Martin race to get a cab.   New York could always be described as a little foggy, but the pea soup seems strong this afternoon.  Eventually we do get to the airport and the “Canadian Mounted” no longer looks all that interesting, and don’t even try to read the flights that were cancelled.

The coupe de grace doesn’t happen until we find both Steven Martin and John Candy on the plane.  Let’s say the dogs are no longer barking and instead should be taken out back and shot.  The DNR has been applied at an alarming rate.  Definition is sometimes there, but it’s missing a lot, too.  It does feel like it gets better as you go along, but it’s often hard to believe that this is a 4K presentation.  Yes, it is watchable, but it’s just disappointing.

Since I was in possession of the Blu-ray I reviewed so many years ago, I watched the first 15 minutes on each disc again.  I looked up and down at each freckle, each layout in the boardroom, and each face that I came across.  I might or might not have uttered an expletive or two.  Not since the 4K presentation of Collateral had I seen a 4K presentation that was actually worse than the Blu-ray.

Contrary to popular held belief, I actually think well of PTA’s Blu-ray’s video.  While not perfect, it’s actually quite watchable, and I stick to my original review in that category.  Most of the time (provided there wasn’t an important missing special feature), I can feel OKabout ditching the Blu-ray and making back a couple of bucks, but not here.  At least Collateral had the sense to include the original Blu-ray disc. 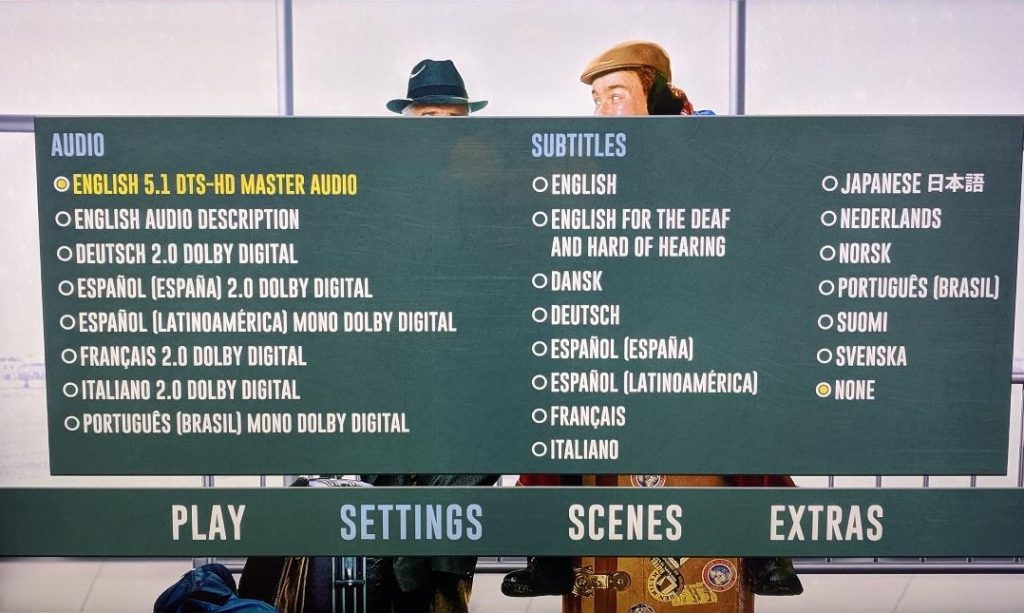 Rather than sit here and list out a couple of paragraphs of the audio and subtitles options for the 4K, I am simply posting a picture.  This was taken with my phone, so please don’t take it as a “screen capture” and rather a piece of information.

The 5.1 DTS-HD track has been duplicated here from the original Blu-ray.  Dialog and the various sound effects, especially present at the beginning, have separation, and probably for the best have not changed.  It is easy to think that this movie is strictly dialog in nature because of the relationship formed between Martin and Candy. Environment and music really play into the movie. “Mess Around” by Ray Charles or the car crash is a great example of this.  Dooby’s Taxiola sounds like a concert, and the planes might make you duck a time or two.  Subtitles are truly SDH and do have cue directions, which was an improvement from the Blu-ray.  Maybe no upgrade is best here.

Disc Two – Blu-Ray Disc (the 2nd disc does not contain the movie)  These are all brand new extras culled from the John Hughes archives and with the exception of Airplane Food are VHS quality in both video and audio (and unfinished in some cases).  However, many of these are exceptional and well worth your time.

It is easy to find myself to be so passionate about this movie after not watching it for a number of years. I was happy to see the characters, and I was even more interested in going along for the journey with Del Griffith and Neal Page. Maybe because I have a soft spot for John Candy and Steve Martin. Or perhaps, the characters blend so wonderfully together into a neat package of masterful movie making.

But what should have been a fairly easy improvement over the original Blu-ray does not go as intended.  The 4K picture is muted, scrubbed, and full of a nasty softness that leaves it watchable but little more.  Perhaps Paramount would be interested in letting Criterion or Arrow handle this at some point, for the 40th anniversary.  The extras are the sole reason to get this package with over an hour of extended and deleted scenes that are often quite hilarious.

If the viewer decides to take a 2-disc case and put the extras disc in with the original Blu-ray, I honestly would not blame you.  Especially if you got the lenticular cover from Best Buy back in the day.  The recommendation here is to proceed with caution, and enjoy … the extras.   It’s really unfortunate that this 4K went sideways just like Owen’s baby.  Take care.

Michael Durr has been reviewing movies for the better part of fifteen years now. He primarily enjoys thrillers, sci-fi, animation and even a little courtroom drama. His favorite films include Escape from New York, the Goonies and anything with Alyssa Milano. When he’s not praising Kurt Russell as the greatest actor of our time or scratching his head over a David Lynch flick, he’s spending time at home in Texas with his lovely wife, Lori and his amazing son. How they put up with him is a mystery, but even Basil Rathbone doesn’t have the time to solve that one.
Abbott Elementary: The Complete First Season Russell Simmons’ Def Comedy Jam All Stars