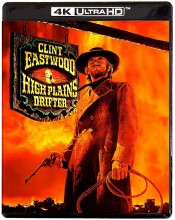 “It’s what people know about themselves inside that makes ’em afraid.”

Clint Eastwood might have gotten his film career started with bit roles in the sci-fi classics Tarantula and Return Of The Creature, but he made his mark in Europe with Sergio Leone and his famous spaghetti westerns. He became The Man With No Name in a trilogy of films, and it would create the character of Clint as much as it would any film character. Eastwood was smart, and he used the time on those films to learn. He was observant and took in all of the technical aspects of the business of making movies, and it continues to serve him 60 years later, as Eastwood has become as much of an icon behind the camera as he ever did in front of it. His first directing job was Play Misty For Me, but he returned to those still fresh spaghetti-western roots for his second time in the director’s chair and his first time directing a western. High Plains Drifter would fit nicely into the trilogy of Leone films. The character called The Stranger could very much be the same Man With No Name, and it’s clear enough that he took away more than a paycheck from his time spent in Italy and Spain with Leone. High Plains Drifter would be Clint Eastwood’s exclamation point on his earlier career and would take him to places I’m sure even The Stranger could have imagined. Let’s just say he’s earned more than a fistful of dollars. Now thanks to Kino-Lorber it’s out in UHD/4K, and it’s never looked better.

A stranger (Eastwood) rides into the small Western town of Lago. It doesn’t take him very long before he’s raped a local woman and taken out a trilogy of thugs who got a little too up close and personal. We’ve seen this character before, but it’s a whole new story. The Stranger is having nightmares of a man who is savagely whipped to death by three outlaws while the town merely watches from the shadows. The scene was inspired by the real life events of Kitty Genovese, who was stabbed to death in front of a New York tenement building while 38 neighbors saw or heard the attack but never came to her aid.

The townsfolk appear to be frightened of three outlaws who are about to be released from prison and swore revenge on the town. They are desperate for someone to protect them, and after the swift way The Stranger took out the first three thugs, they figure he might be their savior. They are so scared they offer him free rein in the town. He can have anything from any merchant free of charge. Of course, he takes advantage of the offer and offers to train a voluntary squad to protect the town from the thugs. It doesn’t take long before they understand they’ve made a deal with a devil. Naturally, The Stranger’s nightmare turns out to have actually happened. We learn this through the film’s jester Mordecai the dwarf, who has been overlooked and even taunted by the town, played by Billy Curtis. He is having flashbacks to the event. The Stranger ends up forcing them to paint every structure in the town red and changes the name of the town to Hell. He’s not there to save them. He’s there to inflict another kind of justice on the citizens and is no help against the outlaws who were the ones who whipped the man to death. Eastwood has gone on record that The Stranger was the brother of the man whipped to death. There are certainly indications of a more supernatural answer. Speculation runs from the ghost of the whipped man, and there is a strong resemblance to an avenging spirit.

Eastwood populates Lago with the kinds of characters that were common in his spaghetti western days. Also, you should take a closer look and you’ll see nods to both Sergio Leone and Don Siegal, both huge influences on Eastwood’s directing. Take note that one of the outlaws is played by Anthony James, who would have quite a prolific career in films and television and would reunite with Eastwood on his classic Unforgivin as Skinny, the man who owned the “Billiards” parlor where the prostitute is cut, leading to the tragic events of that film. Robert Donner would play a preacher here. You might remember him best as the crazy Exidor, friend to Robin Williams’ alien in Mork And Mindy. Verna Bloom would go on to play the Blessed Mary in Mel Gibson’s The Last Temptation Of Christ. Marianna Hill plays The Stranger’s rape victim and would be mostly known for television guest roles, but she’s played the small role of Fredo’s wife in The Godfather Part II.

High Plains Drifter is presented in its original aspect ratio of 2.39:1. The ultra-high-definition image presentation is arrived at with an HEVC codec at an average of 65-70 mbps. The film was shot on 35mm, so is native 4K. Once again this is a pretty fine restoration and transfer. There’s a ton of texture here both in the costumes and the locations. The detail extends to things like sand getting kicked up when a character walks. I think the greatest improvement in the HDR presentation has to be in the flesh tones of those close-ups. They’re a staple in these kinds of films and truly stand up to scrutiny here. Reds pop when the structures are painted. Now this isn’t a bright vivid red. It’s a nice deep crimson, and the restoration doesn’t try to brighten the tones or hues. There’s still a nice element of grain here that makes this a wonderfully atmospheric and organic film. Black levels are nicely rendered here. The contrast allows for those whipping scenes to truly stand out. They’re lit by the flames of source lights, and you truly get an eerie feel out of the scene, seeing the victim’s face clearly flickering in the light as he cries out for help. It extends just perfectly out of the darkness and shadows.

The DTS-HD 5.1 audio presentation does exactly what it’s required to do. You get the dialog and that nice audio production that Eastwood obviously learned from Leone and Morricone. The whips have that distinctive spaghetti western pop. Clint’s spurs cut through so clearly. The score is a subtle one, and the audio presentation fits perfectly in this atmospheric piece.

The extras are found on the Blu-ray copy and consist of an audio commentary with film historians and three interviews:

All of these are new for this release.

Many western fans were starting to hope for Clint Eastwood to team up with legend John Wayne, as one career was really taking off while the other was finally winding down. Eastwood wanted it to happen and sent a letter to John Wayne suggesting that they team up on a project. Wayne’s reply was scathing. He torched High Plains Drifter for its violence and unfaithful depiction of the West. Eastwood never answered or reached out again, and the two never appeared on screen together. Eastwood tried to open the door. ” Somebody left the door open, and the wrong dogs came home.”

Gino Sassani is a member of the Southeastern Film Critic's Association (SEFCA). He is a film and television critic based in Tampa, Florida. He's also the Senior Editor here at Upcomingdiscs. Gino started reviewing films in the early 1990's as a segment of his local television show Focus. He's an award-winning recording artist for Omega Records. Gino is currently working on his 8th album Merchants & Mercenaries. Gino took over Upcomingdiscs Dec 1, 2008. He works out of a home theater he calls The Reel World. Favorite films: The Godfather, The Godfather Part II, The Body Snatcher (Val Lewton film with Karloff and Lugosi, not the pod people film), Unforgiven, Gladiator, The Lion King, Jaws, Son Of Frankenstein, The Good, The Bad And The Ugly, and Monsters, Inc.
The Valachi Papers (Blu-ray) Escape from Alcatraz (UHD Blu-ray) (4K)