Posted in: No Huddle by Brent Lorentson on November 29th, 2022 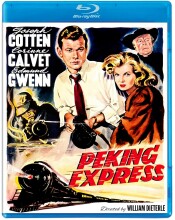 Some movies are simply timeless. The Apartment (1960) is one of those films that I feel still holds up today and is still rightfully considered a classic. Then there are films like Peking Express (1951) that may have been good for their time, but my experience with the film just felt like a chore I couldn’t wait to finish. It’s not that the film did anything wrong. It was shot well, had decent acting, and the story was simple, but it just didn’t grab me. I like older films. I never had a problem with B&W films, but I guess to simply put it, this one just didn’t do it for me. That’s not to say that this film is bad. It just wasn’t my cup of tea, I guess you could say. The focus is mostly on Dr. Michael Bachlin (Joseph Cotton), a doctor who works with the World Health Organization who is traveling from Shanghai to Peking. No this isn’t a coronavirus-related trip, but instead it’s about a group of people trying to flee the Communist-ruled areas out of fear of being taken prisoner and killed. On board the train, Michael runs into his former lover, Danielle (Corinne Calvet). The romance and tension that builds between Michael and Danielle definitely gave me vibes of a poor imitation of Casablanca, but on a train. This could have worked if only the characters were better developed.

There’s a little bit of mystery when a woman is nearly killed on the train, and Michael suspects that it is her husband that is responsible. Granted, I’m not sure if this film taking an Agatha Christie route would have helped, but when the film shifts gears out of nowhere to the train being held captive by a militia group, things sort of improve.

The biggest problem with this film is despite being 85 minutes long it just drags, and so much time is wasted in the first half of the film that by the time the story gets momentum, it is over. Another issue I have is with the character of Michael. He seems like he should have been two separate characters. We get the quiet, mild-mannered doctor in the first half; then when it comes to escaping the militia group, he becomes an action star. Then Michael has some questionable decision-making when it comes to the safety of Danielle. It just seems a little too flip-floppy for me.

The cinematography is a bit hit-or-miss. There are moments where the B-roll just looks like randomly found stock footage; then when it comes to the footage with the cast, most likely shot on a soundstage, the quality is such a step up that it can be a little jarring at times.  Then there is the score. Yeah, there is music there, but it just again falls flat and fails to build tension or even build for the romantic scenes or even the big action sequence.

This is one of those films I doubt I’ll ever revisit. It isn’t bad, but it’s one I doubt I’ll remember a month from now. Those that are fans of The Third Man might be able to appreciate the performance Joseph Cotton delivers and might embrace this film more than I did, and if that’s the case, then great. I’m still able to appreciate how these kinds of films were made, without big special FX or CGI. I can still appreciate the Hollywood magic on display here, but if I have to choose between Casablanca and Peking Express, Bogart is going to win every time.

Brent Lorentson is a horror writer and film critic based out of Tampa, Florida. With a BA in Digital Film, he co-wrote and co-directed Scavenger Hunt. His short stories have appeared in various horror anthologies. In 2019 his short script Fertile Blood will be a part of the anthology horror film Slumber Party. He is currently working on his first novel A Dark and Secret Place set to be released in late 2019. Favorite Films: Taxi Driver, Fight Club, I Saw the Devil, The Wild Bunch, Dawn of the Dead, A Clockwork Orange, Pulp Fiction, Heathers, The Monster Squad, and High Fidelity.
Holiday Gift Guide Spotlight: To Kill a Mockingbird 60th Anniversary Limited Edition (UHD Blu-ray) (4K) The Adventures of Ozzie and Harriet: Seasons 7 & 8