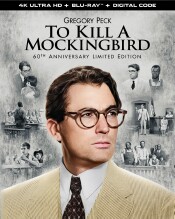 I think I see your problem. You have this list. It’s a list of people you need/want to buy a Christmas gift for. The trouble is that they’re into home theatre, and you don’t know Star Trek from Star Wars. You couldn’t tell a Wolf Man from a Wolverine. And you always thought that Paranormal Activity was something too kinky to talk about. Fortunately, Upcomingdiscs has come to the rescue every Christmas with our Gift Guide Spotlights. Keep checking back to see more recommendations for your holiday shopping. These gift guides ARE NOT paid advertisements. We take no money to publish them.

“Maycomb was a tired old town, even in 1932 when I first knew it. Somehow, it was hotter then. Men’s stiff collars wilted by nine in the morning; ladies bathed before noon, after their 3 o’clock naps, and by nightfall were like soft teacakes with frosting from sweating and sweet talcum. The day was twenty-four hours long, but it seemed longer. There was no hurry, for there was nowhere to go and nothing to buy … and no money to buy it with. Although Maycomb County had recently been told that it had nothing to fear but fear itself … That summer, I was six years old.”

Harper Lee was never a real established author. To Kill A Mockingbird was her only published work for years, and even later there was little to no output by the writer.But she caught lightning in a bottle in 1960 with To Kill A Mockingbird, and it’s become one of the most important novels of the 20th century. While not so much a writer by trade, Lee followed one of the basic commandments of the craft. She wrote what she knew. Lee grew up in the small Ssouthern town of Monroeville, Alabama, and her father was a small-town lawyer who was very much the model for the iconic Atticus Finch. It was through her childhood friend and neighbor Truman Capote that she managed to get a collection of essays about Monroeville and its characters to an agent. She told these stories from the perspective of her 10-year old self reflecting the 1930’s deep south. The collection went through several name changes and a lot of work focusing the material in rewrite after rewrite. In 2014 a copy of the original essays called Go Set A Watchman (One of the original titles for To Kill A Mockingbird) was discovered and published. That book told other stories of these same times and characters. Harper Lee didn’t expect the success that came and didn’t always welcome it. She was a private, quiet person who almost never gave interviews. But when the book became the Academy Award winning movie, her life… and ours … would never be the same.

The story is told from the perspective of six-year-old Scout Finch (Badham). She’s really just trying to give us a taste of her everyday life as a child in her town. She introduces us to many of the town’s characters, and we get quite a glimpse into her daily life of school and play. Among the many people we meet is father Atticus (Peck), who she and her brother Jem (Alford) call by his first name. He’s a widower and raises the children while trying to earn a living as a small town lawyer where his fees are often as not trade from the poor local folks. Her father is asked by the local judge to serve as defense lawyer for Tom Robinson (Peters). Tom is a local black man who has been accused of raping a local white woman. It becomes pretty clear that he is innocent, but the prejudice of that time and place will make it impossible for him to get a fair trial even with the sincere efforts of Atticus Finch.

If you’re expecting the film to focus on that trial, you’ll be disappointed. The film is indeed a statement on the inequalities of the events of the trial, but because the film is told by the child, we get a very different perspective of it all. In truth the trial is more or less a background story, at least to Scout. And that’s what makes it the most effective statement of all. Today the idea appears to be you’ll bring attention to social issues by hitting people over the head time and again during the film. It doesn’t work. The portrayal of this simple “the way things are” is so much more powerful. In many ways it’s not really what the film is about, and because of that the message is so much more powerful and reaches out to you in emotional ways a hammer on the head can never deliver. It’s potent because it doesn’t try to be.

Of course, you can’t ignore that there are many other elements that make this a powerful film. Gregory Peck considered it the most important role he had ever played and remained close with both Harper Lee and Mary Badham who played Scout for the rest of his life. He named his own son after Harper Lee. This wasn’t just a role for Peck, and it shows in his well-deserved Oscar for best actor that year. It’s almost impossible to believe that there were other actors offered the role who declined it, including Rock Hudson, Spencer Tracy, and Jimmy Stewart, who I think is the only one of the three who could have pulled this off. Peck really wanted the job, and that passion remains on the screen forever. The film was nominated for five Oscars, including Best Picture, which it lost to Lawrence Of Arabia. But it did win for Best Adapted Screenplay and Best Art/Set Decoration.

Robert Duvall got his first role in this film. It’s a small one, but a critical one. He plays Boo Radley, a local man who is feared by the local children. His house is that local haunted house that kids talk about, and he ends up being something of a savior at the end of the film. It was also the first film for Alice Ghostley, William Windom, and young Philip Alford. Brock Peters plays the wrongly-accused Tom Robinson, and he’d go on to a brilliant career including playing the head of Starfleet Command in several Star Trek films.

It’s a shame that the book has actually been eliminated in several school districts across the nation because of the use of the “n” word. That’s a case of truly crazy woke talk. The book highlights racial injustice and has a powerful message that is ignored because of the use of a word. Now the film is out in 4K, and there’s a chance so many new audience members will get a chance to experience a true classic in American cinematography.

To Kill A Mockingbird is presented in its original aspect ratio of 1.85:1. The ultra-high-definition image presentation is arrived at with an HEVC codec at an average of 70 mbps. The film was shot on 35mm, so is native 4K. It’s a shame that so many black & white films have so far been ignored for UHD/4K upgrades. Black & white films benefit greatly from the restoration and upgrade. The elements of this film include textures that are truly atmospheric and crucial to the storytelling. The release also brings out the rich grain of the original film that brings an organic nature to the film that makes this one in particular so alive. Superior black levels bring wonderful deep blacks ,and the HDR provides stunning contrast. These are the very essence of a black & white film, to be sure. It’s that sweeter grayscale that brings out the film’s original intent and provides perfect separation of the black & white elements. Detail will surprise you ,because too many people don’t think a vintage film contains this much clarity, and until UHD and HDR they pretty much didn’t. That’s no longer the case, and this superior restoration and transfer is all the evidence you’ll need.

The DTS-HD 5.1 audio presentation has not been altered at all from the earlier release of the film on Blu-ray. That’s not really an issue for me, because this film is really there to serve the dialog and a few wonderful score moments. But it’s a quiet film that doesn’t benefit at all from making it more aggressive.

There is one new extra feature here. You also get all of those wonderful features from earlier including a couple of gems with Gregory Peck. Included new here is:

All Points Of View: (25:06) This is a more modern look at the importance of the film and its place in the civil rights movement. It provides vintage footage of those historic moments and provides an argument that the film was a part of that struggle.

Universal deserves a ton of credit for their treatment of this valuable film. There was a lot of tender care in the restoration and presentations here. It’s a film that should be on everyone’s shelf, and this release makes a pretty strong case for picking this one up. It’s a film everyone should see, particularly in light of the more recent protests.  My holiday gift to you is to encourage you to put this one on your list … for yourself. That’s my opinion.  “Well, I don’t know that I have much else of value that belongs to me.”

Gino Sassani is a member of the Southeastern Film Critic's Association (SEFCA). He is a film and television critic based in Tampa, Florida. He's also the Senior Editor here at Upcomingdiscs. Gino started reviewing films in the early 1990's as a segment of his local television show Focus. He's an award-winning recording artist for Omega Records. Gino is currently working on his 8th album Merchants & Mercenaries. Gino took over Upcomingdiscs Dec 1, 2008. He works out of a home theater he calls The Reel World. Favorite films: The Godfather, The Godfather Part II, The Body Snatcher (Val Lewton film with Karloff and Lugosi, not the pod people film), Unforgiven, Gladiator, The Lion King, Jaws, Son Of Frankenstein, The Good, The Bad And The Ugly, and Monsters, Inc.
Escape from Alcatraz (UHD Blu-ray) (4K) Peking Express (Blu-ray)