Posted in: The Reel World by Brent Lorentson on December 3rd, 2022 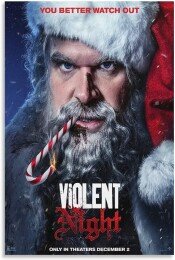 With Thanksgiving in the rearview mirror, that can mean only one thing; that Christmas is just around the corner. Normally this time of year the theaters are filled with movies that are either A) jockeying for awards consideration or B) are big-budget blockbusters, and then if you are lucky there are a few holiday films sprinkled in for good measure. It has been a while since there has been a holiday film that has appealed to me. Some of the best ones in recent memory are Better Watch Out (2016) and Krampus (2015), so I think it is fair to say we are long overdue for a great Christmas film.  At first glimpse, Violent Night doesn’t look the part of what you’d traditionally call a Christmas film, but even the trailers for the film market this as a mash-up of Die Hard meets Home Alone, and that’s exactly what you get, and it is gloriously violent and heartwarming.

When we first meet Santa (David Harbour), he’s taking a break from delivering presents and is in a bar enjoying some drinks. This isn’t the cheerful Santa with rosy cheeks and filled with the ho-ho-ho holiday spirit; instead he’s a jaded and broken-down man who has become cynical about what the world has become. This opening scene does a fantastic job of setting the tone of the film, and seeing Harbour in the full Santa costume and makeup just makes me happy, as much as I love him in Stranger Things, I think I’m always going to see him as Santa because of this film.

The story mostly takes place at the Lightstone mansion. It’s a compound that is one of the most protected properties in America, and it is where the Lightstone family is getting together to celebrate the holiday. This isn’t a sweet and cozy family gathering; this is a family that seems to thrive on dysfunction and greed. Gertrude (Beverly D’ Angelo), is the matriarch of the family, and she couldn’t be any more opposite from her role as the mom in the National Lampoon Vacation films. She’s cold, vulgar, and tough as nails, and she seems to be having a blast in all her scenes. Then there is her son, Jason (Alex Hassell), who is in a broken marriage to Linda (Alexis Louder) whom he’s trying to patch things up with all for the sake of his daughter, Trudy (Leah Brady). Then there is Alva (Edi Patterson), who is the greedy daughter of Gertrude who is desperate for approval, affection, and most of all the wealth of her mother. Alva has an obnoxious son who’s obsessed with social media, and then there is Alva’s husband, a dimwit movie star who is still chasing fame and fortune.

The Christmas gathering is abruptly ended when Scrooge (John Leguizamo) barges in on the festivities to hold the family hostage so he and his team of highly trained mercenaries can break into a safe hidden in the Lightstone mansion and steal $300 million. This all happens while Santa is making his stop at the Lightstone mansion and is enjoying some cookies, milk, and their chair massager. Once the violence starts, the film doesn’t ease up on the mayhem and witty one-liners till the final credits roll.

The heart of the film revolves around Trudy and the connection she makes with jolly old Saint Nick. The interactions with these two are mostly through a radio, and they don’t have much screen time together, but their interactions are genuinely heartwarming. Trudy is able to give Santa hope that not every kid is greedy and ungrateful, and for that he’s willing to dispatch some bad guys who are on his naughty list in some pretty gruesome ways.

I love the feel of this movie. It’s like a 90’s action flick, and it’s not playing this for nostalgia or laughs, but in a way to just have some over-the-top fun. Director Tommy Wirkola (Dead Snow) really embraces the absurd nature of the plot and just has fun with it and doesn’t hold back. The fights are hard-hitting, and the kills make you flinch and want to cheer. As for the booby traps that give this the ultimate Home Alone vibe, well, let’s just say Kevin McCalister has nothing on Trudy. The script is also what makes this a fun one. There are so many great one-liners in this film, and seeing Santa making his quips while shoving grenades beneath people’s clothes or cursing at his reindeer was enough to keep me grinning throughout. And then there is the back story of Santa once being a badass Viking, I mean, there is just so much crammed in this film it made me feel like a glutton, indulging in this cinematic holiday buffet of mayhem.

While this won’t win any Oscars, this is one of my top experiences of the year in the theater. This is a movie you need to get out and see with a crowd. This is the holiday film of the year and will become a holiday classic.  For those of you needing an escape for two hours from the stress of the world, Violent Night delivers the goods. It has heart, it has chaotic violence, and it will make you laugh while getting you into the holiday spirit.

Brent Lorentson is a horror writer and film critic based out of Tampa, Florida. With a BA in Digital Film, he co-wrote and co-directed Scavenger Hunt. His short stories have appeared in various horror anthologies. In 2019 his short script Fertile Blood will be a part of the anthology horror film Slumber Party. He is currently working on his first novel A Dark and Secret Place set to be released in late 2019. Favorite Films: Taxi Driver, Fight Club, I Saw the Devil, The Wild Bunch, Dawn of the Dead, A Clockwork Orange, Pulp Fiction, Heathers, The Monster Squad, and High Fidelity.
French Noir Collection: Le rouge est mis / Le dos au mur / Un témoin dans la ville (Blu-ray) Miracle