Posted in: No Huddle by Michael Durr on December 6th, 2022 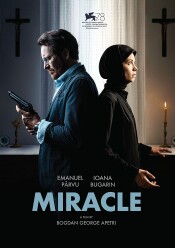 Hopefully, most of you have enjoyed my review of Unidentified, the first in a series of three films directed by Bogdan George Apetri set in a small town in Northern Romania.  It is a nontraditional trilogy, as all three stories share the same universe but do not require the viewer to watch them together or in a certain order.  Well, today I have received the second film in this series, entitled Miracle.  Since they were filmed at the same time, one would hope that it is just as good and just as brilliant as the first film.  Let’s take a look and see what it has to offer.

We see a girl crying over some holy water.  Her name is Cristina Tofan (played by Ioana Bugarin).  She is dressed in clothes that resemble those of a nun and is staying at the covenant.  Sister Mina (played by Nora Covali) enters and hands her a bag with a cell phone and tells Cristina to call.  She does so, but there is no answer, and she tries again.  Again, no response.  The car is waiting by the side gate, and Cristina prays for safety.

Cristina leaves to find the taxi and does her best to go unnoticed, only attracting the eye of one such nun.  Cristina soon finds the taxi driver, Albu (played by Valeriu Andriuta), who tells her to get in.  However, rather than allowing her to sit in the back, he tells her to sit up front, which she begrudgingly does.  This is for the purpose of another customer whom Cristina is very wary of.

That customer turns out to be Dr. Ivan (played by Valentin Popescu), who is on his way to the hospital.  As it turns out, so is Cristina.  The doctor asks what ails her, and the young lady says she is having headaches.  He says he’ll take her to see another doctor and give his recommendation.  This is about the time where Cristina reminds Albu that she needs to change into plain clothes before stopping at the hospital.

Albu finds a place and tells Cristina to get out if she wants to change her clothing.  The young lady makes her way through the livestock and changes as quickly as possible and lets down her hair as well.  Both the doctor and the taxi driver raise an eye upon her return and resume their trip to the hospital.  Once at the hospital, Dr. Ivan and Cristina depart the taxi.  Albu tells the lady before she goes to meet him at the train station at 5 pm to take her back to the convent.

The movie is split into two parts.  One is as I described, a young lady in the clothes of a nun is taken to a hospital.  The second is headlined by a detective, Marius Preda (played by Emanuel Parvu), who attempts to find out what happened to Cristina Tofan.  Actually we as the viewer do actually find out what happened to Cristina, and it is perhaps some of the most unsettling film one will ever watch.  We’ll leave it at that.  I will say that if you can make it past that point, the viewer is rewarded with an excellent movie and an ending worth watching a couple of times at least.

This film is extremely well acted, and while I did not think it was as good as the first film in this Romanian trilogy, Unidentified, it still had plenty of moments.  It’s also shot differently than that film, since it basically consists of two shots and doesn’t go back and forth.  We follow Cristina from the covenant to the hospital and away from the hospital, and then we follow Marius in those places and others.

Since this is a trilogy, some of the previous characters do show up, but in minor roles, and we see some of the same set pieces as well.  It helps to bridge the worlds and bring the two films together in this shared universe. I am very interested to see the third film, but unlike the first two films which were shot together, we’ll have to probably wait until 2024 at least to see the third.

The commentary is again top-notch with the well-spoken director, Bogdan George Apetri, who explains the various scenes of the movie and his motivations for the way he shot certain things.  This energy should help to heighten the viewer’s interest in the movie.  He also does provide  a few notes about the third film and how it will go but does not go into distinct detail about it, which is probably for the best.

The deleted scene takes place during the initial taxi cab ride and is basically an extension of one of the existing sequences.  It runs about three and a half minutes, and it’s honestly a bit over-the-top with Cristina crying constantly and the Doctor going into this huge tirade about politics and religion.  It was probably best left on the cutting room floor, but certainly worth viewing.

The short film, entitled A Very Small Trilogy of Loneliness, is also directed by Mr. Apetri.  It was a National Finalist in the 2006 Student Academy Awards.  It runs about seven minutes, and it’s essentially three characters, a woman, man, and boy in separate but shared backgrounds.  Each one is to portray loneliness and how each of them interpret their surroundings.  There are subtle differences between the three, and it’s a gorgeous piece of cinematography.

This film did its fair share of film festival tours and picked up a few winners along the way.  For 2021, it won the International Competition for Best Film in the Warsaw International Film Festival, the Critics Prize for Best Feature Film at the CinEast.  For 2022, it won the Romanian Days Award for Best Feature Film at the Transilvania International Film Festival.  It also picked up quite a few nominations along the way.  It’s a good film, a really good film in fact, but it’s also very dark and presents a rather unsettling view of religion, politics, and the world behind them.  The scene they place at the midway point will turn off a lot of viewers (it affected me for at least half of the second act), but I do understand its intention.

I am very excited for a third film, but it stinks that I’ll have to wait probably a couple of years before I see it on disc.  (It’s not exactly like I’ll be able to see it w/English subtitles before then.)  The disc does have a few nice extras, and again the commentary is top-notch.  Again, as I mentioned on Unidentified, please, Film Movement (or whoever makes these decisions) consider a Blu-ray trilogy release by the time the third one is ready.  Or maybe it ends up in the hands of Criterion, who can certainly cater to that type of release.  I give this another high recommendation.  Enjoy.

Michael Durr has been reviewing movies for the better part of fifteen years now. He primarily enjoys thrillers, sci-fi, animation and even a little courtroom drama. His favorite films include Escape from New York, the Goonies and anything with Alyssa Milano. When he’s not praising Kurt Russell as the greatest actor of our time or scratching his head over a David Lynch flick, he’s spending time at home in Texas with his lovely wife, Lori and his amazing son. How they put up with him is a mystery, but even Basil Rathbone doesn’t have the time to solve that one.
Violent Night (2022) Film Noir: The Dark Side of Cinema XI A Woman’s Vengeance / I Was a Shoplifter / Behind the High Wall